Happy days.. rainy season again, just the best time of year for touring.
Clear clean air after rains, showing the scenery in all it's splendour.

Nigel and I met up in Pong, Phayao province. There is a super Khao Soi Gai restaurant, halfway down the main drag next to a large tree in the pavement. We then rode down to Phrae for the night. Phrae is a very interesting city with lots to see.
In the morning, we rode around the old city wall road and visited the Teak Museum (closed again..) We did not find the site of the recently torn down 100 year old Burmah Bombay Trading co building, but the locals knew all about it.

Headed east out of Phrae on 1024, past the "Golden Rock" Wat Inkwen. Smaller than the Golden Rock in Burma, but nevertheless it is perched on the edge of a small cliff.

But just past the temple is a most amazing tree. A tall dipterocarp, completely covered in creepers. It is standing in a private house garden next to a small stream.

On and upwards, over the Khun Sathan NP and out into southern Nan. Cold riding, over the mountain....

There is a little flat viewpoint on the south side of the 1216 after you pass the top of Khun Sathan mountain.

After coffee in NaNoi, we headed south through Na Muen and onto the superb 1026. One of the best roads around, smooth fast curves and a complete joy... Zero traffic.

On arriving at Pak Nai, we found the reservoir so low that no ferries were running....

At NaNoi, we turned east and rode over the Sri Nan NP. Wonderful views here down into the Nan river valley.

Over the Nan river on 1083 and down into Uttaradit.

Just love this remote part of the country... on the 1047 through Fak Ta and into Nam Pat, Takabai Resort, for the night.

Next morning, took a quick spin out to the Largest Teak Tree in the World, 15klms southwest of Nam Pat.

Then back and around to 1239/1212. The 1212 is a one way road 27klms, leading SW into a huge mountain range area of National Park and waterfalls straddling the Uttaradit / Phitsanulok border.

I rode down 1212 last year. My GPS waypoint at the end says..."End of World"... pretty damn remote out there....
But the double peak mountain of Phu Miang is calling... a 2 day hike up and down, camp on the top... maybe that is one for this cool season..

Phu Soi Dao NP was open. Many hikers were walking up to see and photograph the wild flowers that grow around the pine trees at the base camp. Need to do.. one day.
A dip in the falls at the second tier up is a must when visiting Phu Soi Dao. Deep enough to swim and a superb exhilarating shoulder massage under the waterfall itself.

Mine clearance still ongoing, where the 3 month border war with Laos and Vietnam occurred in the late eighties. Blame the French mapmakers of the late 1800s.

The wonderful Phu Suan Sai NP was closed, so we rode down into Na Haeo, a lovely little town right in the "elbow" on the Laos border.

Before you reach the town proper, there is possibly the most beautiful temple in the north.
Hundreds of years old, the viharn of Wat Sri Po Chai stands on a large paved ground

It has a new roof, made of hardwood tiles.

In the Laos style, it has a very large and low roof and low wall around it.

You have to wonder if if may just fall down one day. The steel cable around the body of the building appears to be stopping the walls from collapsing

The patina of age is oozing out of the cracks....... just wonderful.

There were guardian lions either side of the steps here.. many years ago..

The 4" thick hardwood doors are also magnificent and ancient.

A very special place and well worth riding several days to see this old wat.

When the border is open, people cross the river in small boats and pull themselves over using the suspended steel rope.

We could see this observation tower from the main road.

Next stop was Wat Sri Po Chai Na Phueng, south of Na Haeo on the 2113. This is also a lovely ancient temple with murals along one outside wall.

Sadly, the old viharn roof had collapsed since my last visit in 2017 and it is closed. A temporary metal roof now covers the ancient building.

Here are some pics of how the temple looked three years ago.

Next morning we headed up onto the bluff. 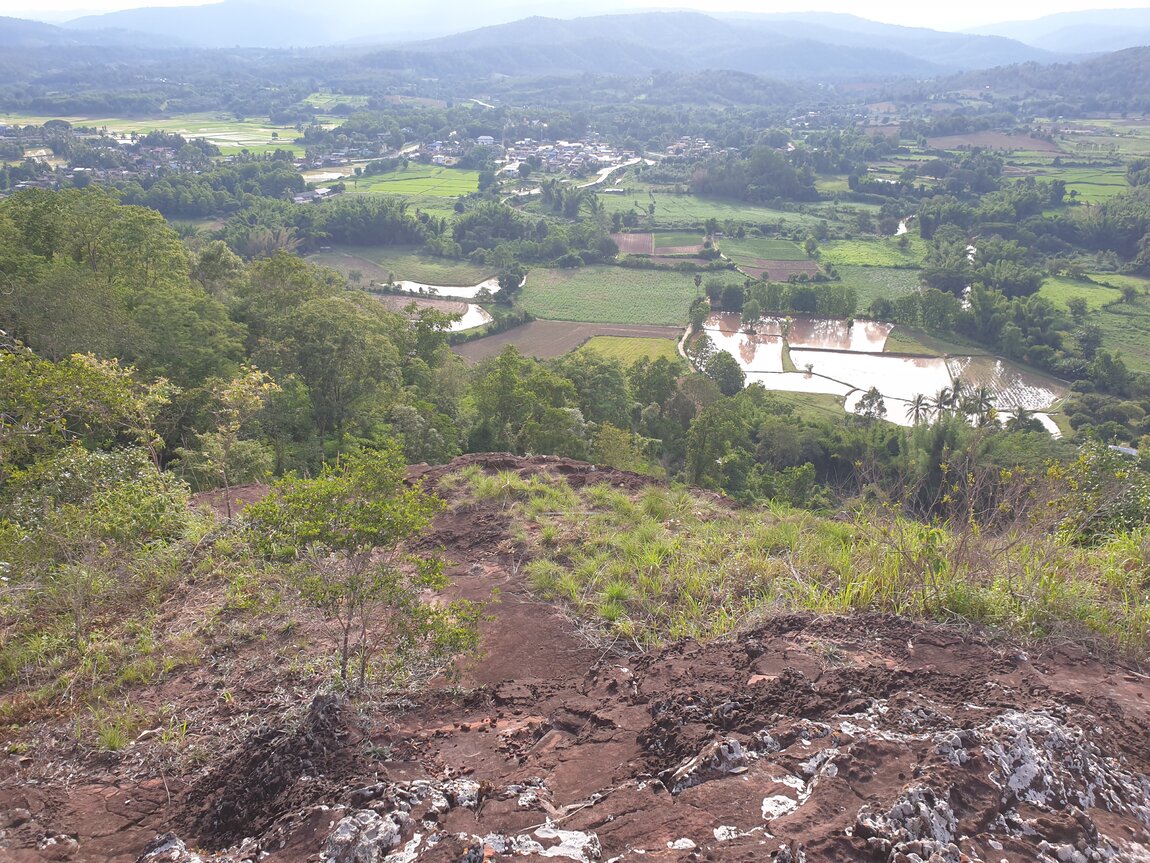 The border runs along the river which passes between these two mountain ridges. Here looking across to Laos.

We found the observation tower at Phu Pha Hmok.

Then it was off along the wonderful 2195 river road. The road runs next to the Hueang river. A beautiful morning with a little Talay Hmork in the valleys.

Almost no traffic on this road as most vehicles travel to the south on the Phu Ruea road.

Later, the 2195 runs alongside the Khong and into Chiang Khan.
Not a favourite place for me, too touristy, but love this old building on the river road drag. Wattle and Daub..?

Further east on the Khong.

From Loei and into NongKhai.

We made it far east as Sangkhom, about 40klms before Nongkhai city.
This restaurant looks like a fave stop for bike tours going to/from Nongkhai.

She's a wide river down here, compared to the Golden Triangle. Must be impressive when the river level is up.

Back to swoopy quiet roads into Na Haeo.

Next day, we rode back north up the eastern border roads through Uttaradit, Phu Soi Dao and Bahn Koke.

Back to Pineapple Junction.

Then the really good stuff.....

This friendly moggy wanted to ride shotgun...
He lives with the soldiers in the little army camp there, up to the right.
This would be a super place to camp in the cool season and see the morning Talay Hmork.
Bet it gets damn cold in January.

The next section into Nan used to be dirt for 16 klms. I took the old Triumph along it many years ago, nearly shook the bike to pieces on the rocky sections. Now it is a super quiet little road, thin tarmac and a few potholes..... lovely.

There were about 6 of these roadside slippages.... very mountainous here.

Then it was head back home, via Mae Charim for the night.
Next day, up through Nan into Phayao, the 1148 to the Malaengpor restaurant in Chiang Kham for our goodbye lunch.

After 6 days, we had had a couple of light showers. Then on the last day it rained a bit heading up the 1155 past Phu Chee Fah.
The finishing flourish to the ride was the Paradise Road back from Chiang Khong.

6 days, 2000 klms. What a fantastic ride. That will keep me high for a couple of weeks.

Thanks for joining Nigel, it was a gas...

NOT A CHANCE. We have thousands of miles more to ride together.

Just the finest touring bike I ever owned!

It may be time to fix a few oil leaks though... haha..

I am guessing Edward Turner would crack a smile if he were around to read this report....

Note; Big Thanks to Mike In Udon (Thailand's Meriden Triumph expert), for fixing up my iron head.

Excellent, Ian - Thank you for sharing a wonderful part of the Country.

I wonder what the story is there?

R1243 - isn't that an amazing descent when you cross the provincial border from Uttaradit to Nan?

Great report Ian,
All those magnificent roads, with no traffic. Amazing Thailand.