I was lucky enough to be in Laos for the Hmong New Year, and one of the best towns to wittiness the celebrations, was in Phonsavan.

There were a few small activities in the centre of town, but the big show was about 3 km out of town.

There were a lot of bulls, and I thought they were going to judge them and pick a winner like they do in Australia, but that wasn’t to be the case.

There was what you call a natural amphitheatre, which was usually used for a soccer pitch.

I couldn’t work why everyone was so far back from the animals.

Next thing they bring two bulls in to the arena and it was then I worked out what was going on.

The bulls started fighting, and it was pretty gruesome to watch really.

These two went at it for about a minute, and when the loser fell to ground he didn’t look in good shape, it wasn’t a pretty sight. After being hit with a stick a few times, he got up and seemed ok.

A lot of the bulls didn’t want to fight, or they just had a quick fight then ran away. This was when I realized why everyone was standing back so far, and why I shouldn’t have been right up the front... It’s amazing how fast you can run when there’s a not so happy bull running in your direction.

Further up the hill the bull fighting made way for people in search of love.

There was a large flat area with a stage up one end, where performers danced and long winded speeches were made. 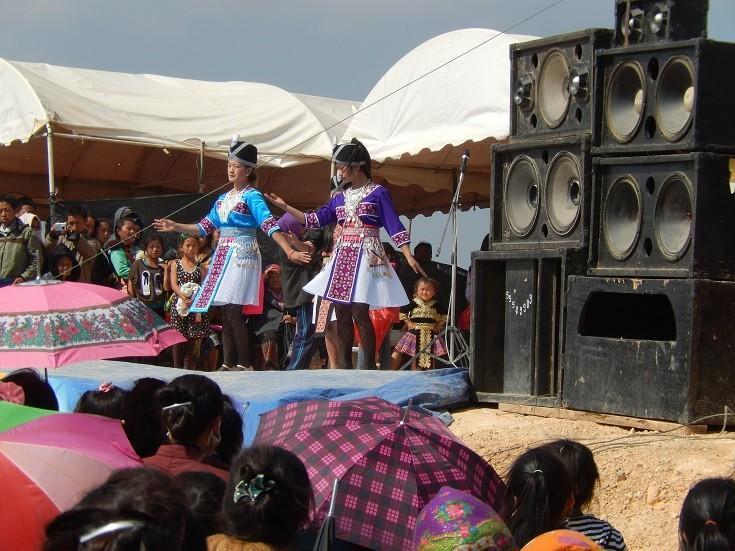 The view from the stage was amazing, it was a sea of umbrellas, and under those umbrellas the Hmong courting rituals were well under way.

There were so many different styles, and colours of dress.

There was plenty of food, but no beer what so ever.

I left about 2pm, and more and more people were arriving as I left.

This was really something to see. The photos don’t show just how just how good it was to be there. I think the celebrations went for about three days, well worth checking out if you get the chance.

Thanks to Davidfl for the info regarding this brilliant event.

Wow, you were a lucky man picking up on that - I wanted to be there too, but had an appointment in Mae Hong Son that I could not cancel.
That must have been an amazing turn out alright.
Some of those costumes are absolutely beautiful too with quite a few I have never seen before, some new modern variations, but some traditional ones too! Jurgen & I would have had an absolute field day there!
...I really must try & get there next year.

There were so many different styles, and colours of dress.

Nice report, Rex. That's one to put on the too do list. I have never seen the bull fighting before. Not really sure if I want to. Have a safe ride.

Excellent Neil - how lucky are those who leave the bitumen to participate in such events.
F

Beautiful and colourful ! A festival not to be missed !

great report, i want to go next ear!!!