This week I had the Pleasure of Hosting at the X-Centre the "Pirelli" Motorcycle Tyre Importer for Thailand and His Newest Venture "Thailand SuperBike Magazine". We had a Dinner here on Wednesday night which was a quiet affair but good to see some of the Locals turn up to have a Chat! So interesting Talks and Topics. A Couple of Pictures of the Dinner: 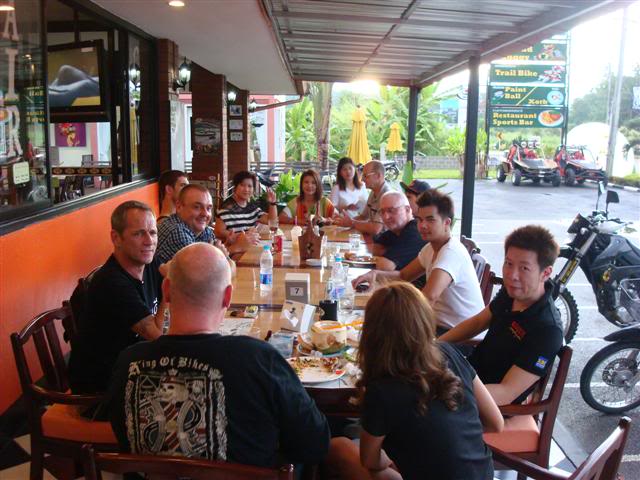 The Next day everyone was here for Breakfast before spending the Rest of the Day Filming and taking Pictures of various places and some Action shots around the Samoeng Loop. The new SuperBike Magazine were doing an Article on Local Biker West a well known Racer and Road Rider! He had His New Multistrada out along with His New KTM 690 Motard which He changed between different Photo Shoots depending on what was wanted? He was also Joined by John on His Motard and Pat on His Immaculate BMW S1000RR. Take a look at this:

Pat is the General Manager of Pirelli Motorcycle Tyres Thailand and is very active in the Track scene both in Sponsorship and Riding Himself! For all You Guys needing Tyres You can't go past Him both for Price and Service! Check it out here www.pirelli.in.th .
We finished up things by early evening yesterday with a few Beers. Great Guys and looking forward to seeing the Completed Magazine. I will keep You all Posted and let You know as soon as it is Published!

Ian, great stuff; sorry to have missed it!

Good stuff Ian. Looks like the weather held out and I reckon there must be some nice Pirelli Diablo Corsa rubber laid down on the Samoeng loop now!

bung;268992 wrote: Good stuff Ian. Looks like the weather held out and I reckon there must be some nice Pirelli Diablo Corsa rubber laid down on the Samoeng loop now!
Click to expand...

Thanks for the invite and shame I couldn't make it. Looks like you all had a good time and Pat's Beemer looks wicked. As a multi-time customer, I'll second the opinion that Pat and Charlie of Pirelli provide excellent service for a great product!