Tragic news
Tom Forde, active on GTR & a pioneer rider in S E Asia was killed in a bike accident - "hit from behind" just out of Phayao, Sunday 28th August 2016.

we had some outrageous times & adventures.
It was never a dull moment with Tom - he always enjoyed life to the full..
There were no half measures, especially with Doris, his beloved 650 BMW Dakar. 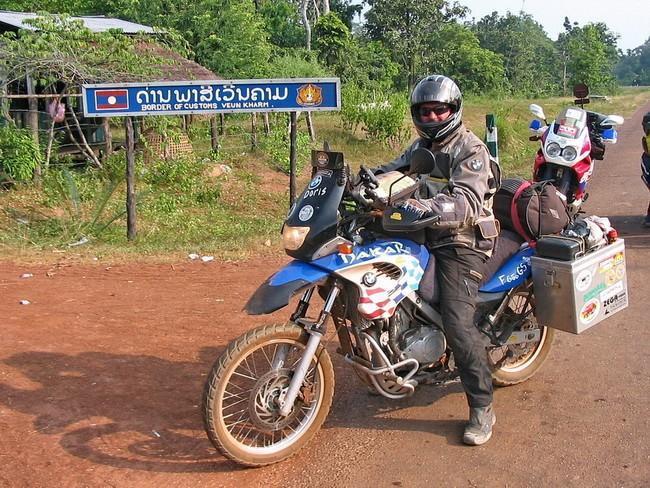 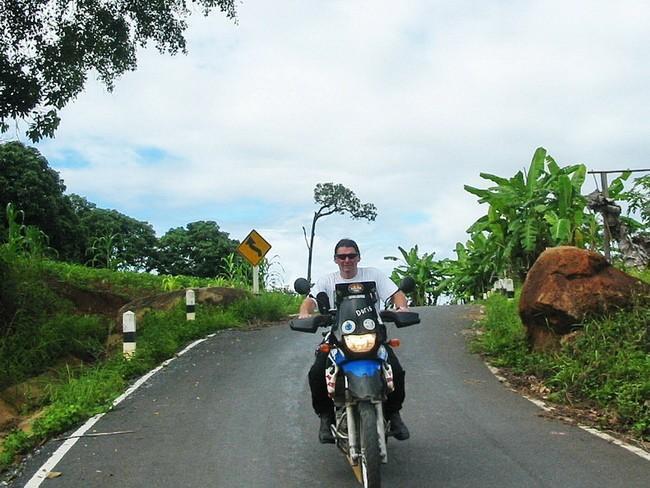 Tom was a character & respected as such 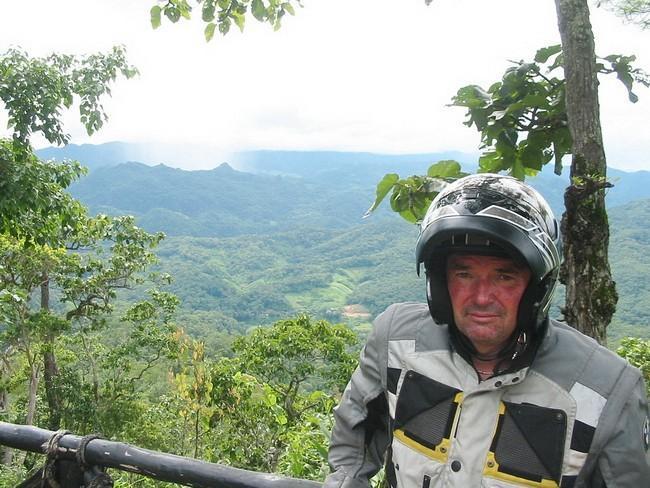 See you on the next GTR MHS Memorial Ride, mate.

Tom was with me surveying for the first Laos guide map in 2004
View attachment 1951
we had some outrageous times & adventures.
It was never a dull moment with Tom - he always enjoyed life to the full..
There were no half measures, especially with Doris, his beloved 650 BMW Dakar.
View attachment 1952

Tom was a character & respected as such
View attachment 1954

See you on the next GTR MHS Memorial Ride, mate.
View attachment 1955
Click to expand...

Very sad indeed. A great contributor to all & in everything he did. I'm shocked by your report of how it happened. RIP

Very sad news. I didn't know him well but on the few occasions we met, he certainly came across as a character. R.I.P.

RIP Tom.
It is a tragic loss to the riding community here especially those in the region.
Surely he will be riding his next adventure up there on those heavenly routes with the Lord.
K

Sorry to know of this. He will be missed.

Tom in MHS speaks of his love of biking in Asia

All being well there will be a funeral for Tom this weekend, with his cremation on Sunday 4th September 2016.
Full details coming once we have it all set up & confirmed; but the wat will be a local wat near Tom's house in San Sai.
Please stay tuned.

I met Tom a few times over the years and found to be a real character and true motorcyclist.
RIP Tom.

The funeral for Tom will be held at Wat Mae Kuang 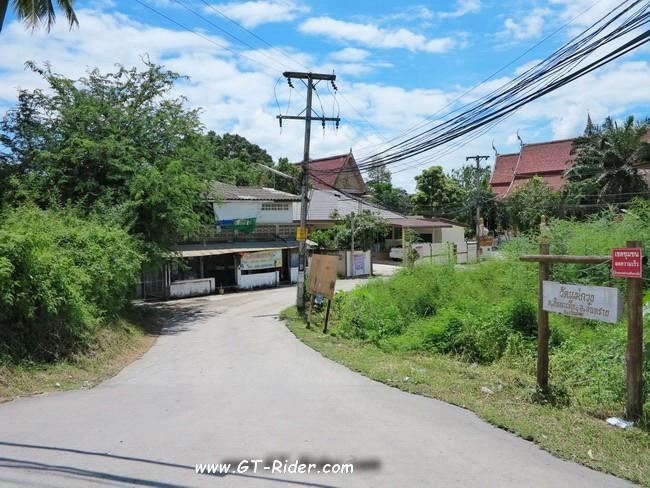 There is a sign for the Lahu Development Foundation

go down the soi 50 metres & the wat is straight in front of you.

it will be a Buddhist ceremony.
From Thursday 1st September -Sunday 4th September.
Prayers will be held in each evening from 7.30PM on Thursday - Friday - Saturday nights.
Light drinks & snacks will be available in the evenings.
All are welcome to come & show your respects to Tom.
4 members of Tom's family will arrive from Australia on Friday.

The actual cremation will take place on Sunday after morning prayers & ceremony.
There will be a light meal, drinks & speeches made in the morning.

On the Sunday morning for the actual cremation we would like all the bikes to be lined up in a guard of honour for Tom's final journey.
A Marshall be will on duty to tell you where to park & line up.

Thankyou everyone in advance for your help & attendance.
Last edited: Aug 30, 2016

For the Sunday cremation & prayers we would like riders to be present 10.30-11.00 AM.
The actual cremation should be early - mid afternoon but we would like to be organized in the morning & people to participate in the ceremony.
A light lunch will be served, the monks fed & then the cremation, I understand.

Thanks for your help & understanding.

So sad for Tom I know him a lot of years. Armin

There will be a post funeral wake - food & drinks & speeches commemorating Tom's life at the Bamboo Bar in Sansai Sunday 4th September.

See you all there for a rousing send off for Tom

I wish to thank those who informed me, via the grapevine of co-workers of Toms earlier life. A workmate, Tony, from Brisbane relayed the message.
Tom was a lot of fun to be with and constantly doing and planning of, the next adventure. Knowing Tom since our 30's in a work capacity in Newcastle , he did have an extensive drafting career both in Newcastle and overseas, loved his surfing and keeping fit. With another friend Ian, the three of us secured work contracts in Invercargill NZ. For 6 months after work and weekends we toured around "gumboot" country (the area south of Dunedin) in an old falcon ute that Tom bought. A few years ago he returned to work in Brisbane to finance a restaurant in Thailand for his Thai partner. That was the last I saw of him. My sympathies to his family. May he be remembered for the good times.
R.I.P Tom 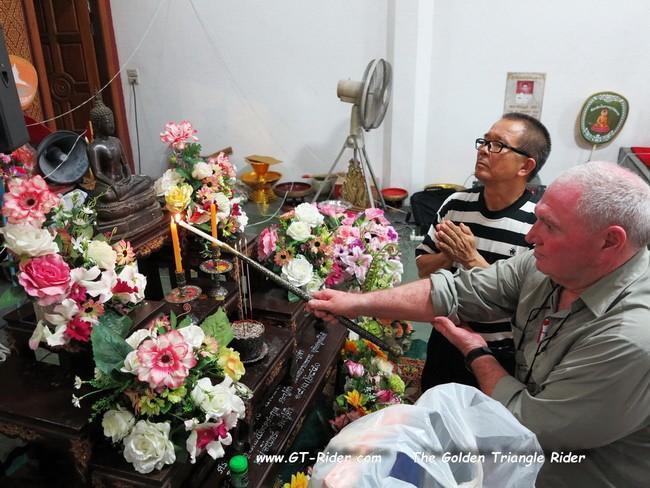 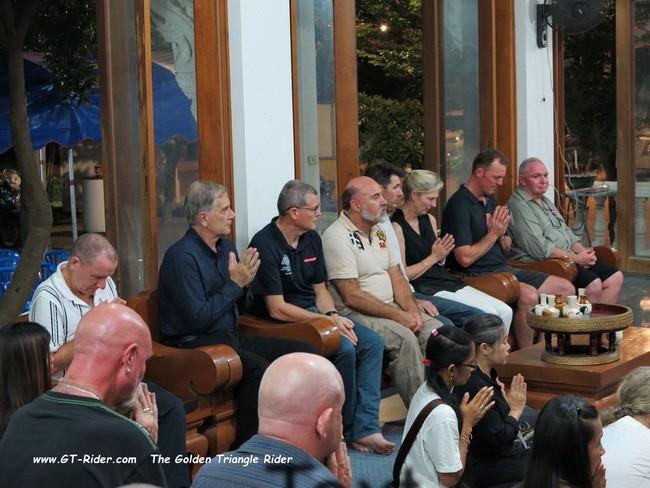 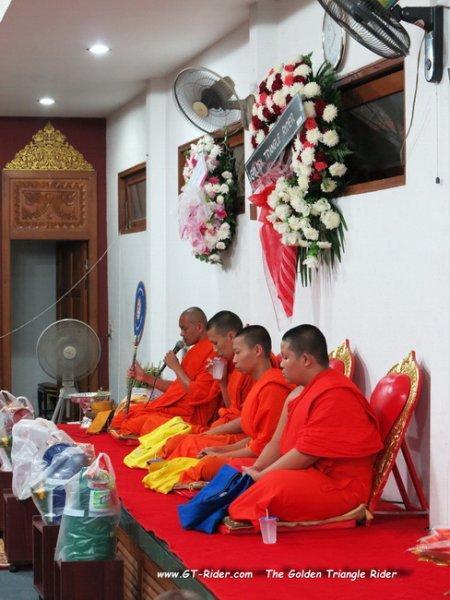 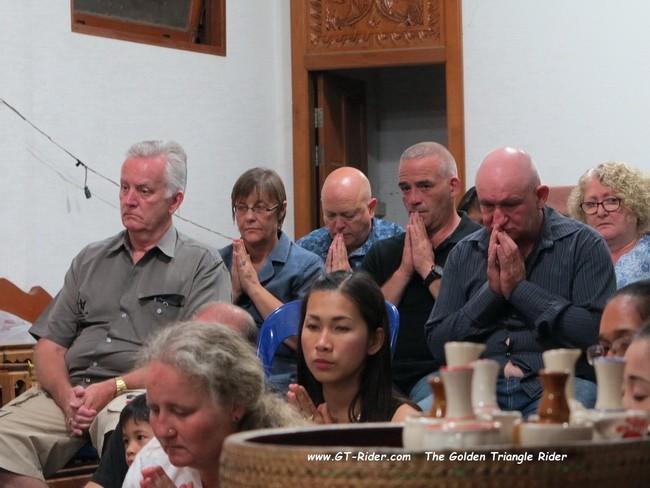 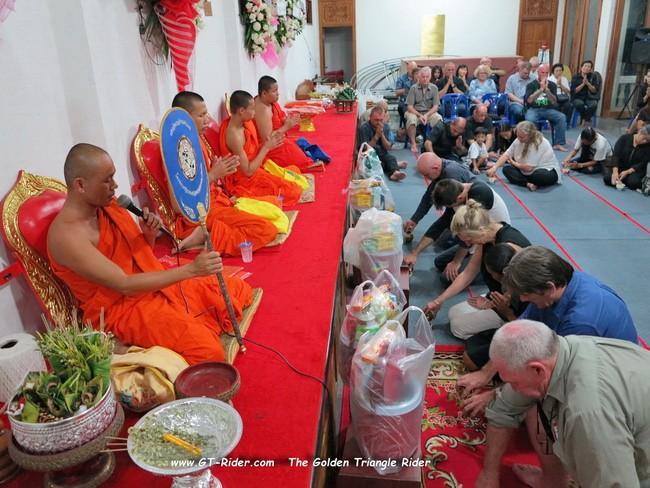 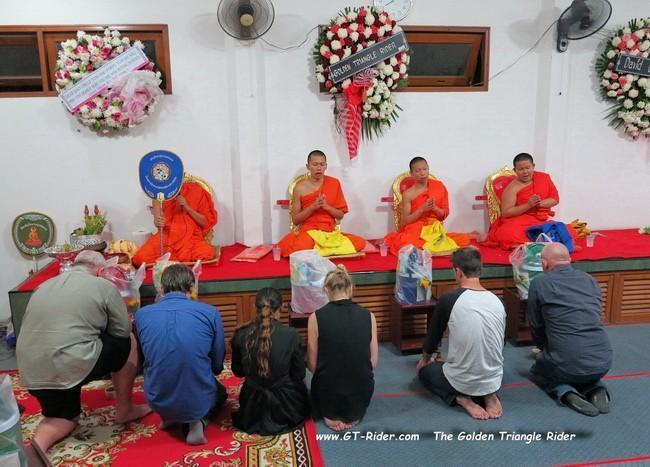 Thank everyone who came.

Please note that the final prayers tomorrow morning now starts at 10AM.
We would like all the guys with bikes to be present 9.30-9.45AM, so we can be organized before the ceremony starts.
Thanks.

Preparing for the main event

27 riders turned up with their bikes to send Tom off as a fellow biker.
Thanks to all those guys who came. 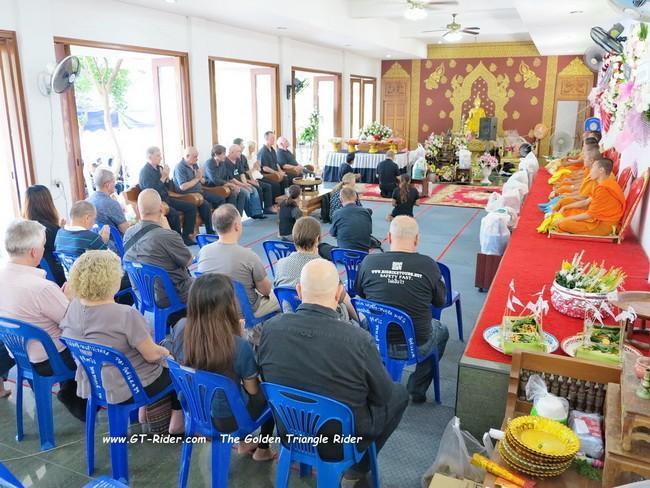 Tom was a strong character & you always knew where you stood with him.
And on the day 73 people came on the day to show their respect for a man who stood for what he believed in. The attendance was considerably more than we had anticipated, & a remarkable show of respect for Tom, the biker, the adventurer, the man.

Some riders came from afar - Khon Kaen & the south. Mates of Tom from his original Samui days.

Nom, the wife of Liam (Tom's best mate) who did an amazing job organizing the temple funeral . 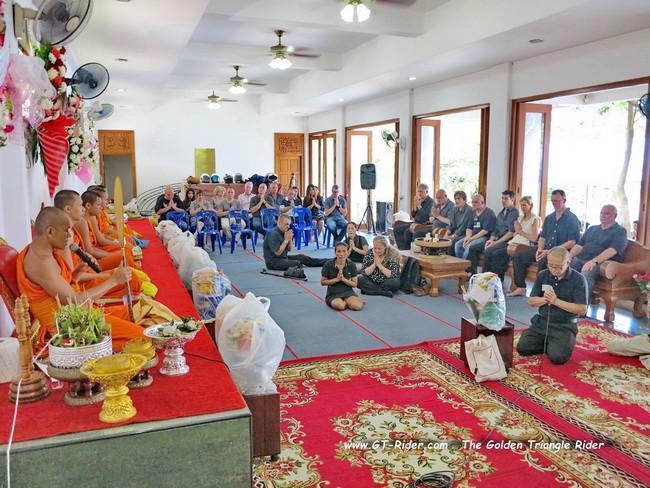 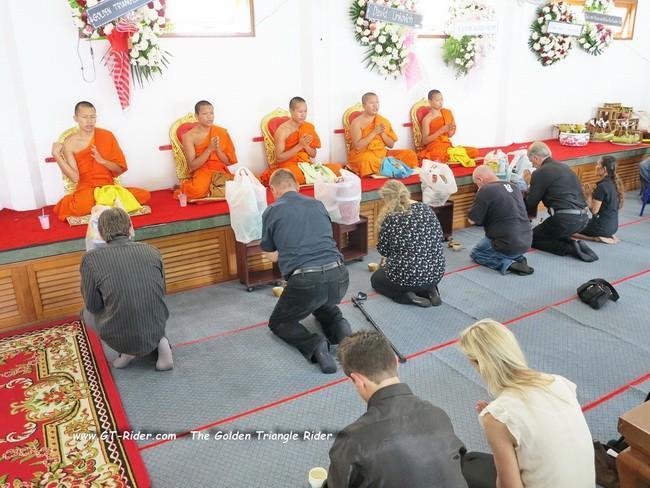 Kylie, Tom's daughter, handing out cloth to be presented to the monks.

Matt's first time in Thailand & it was an emotional surreal experience for him. 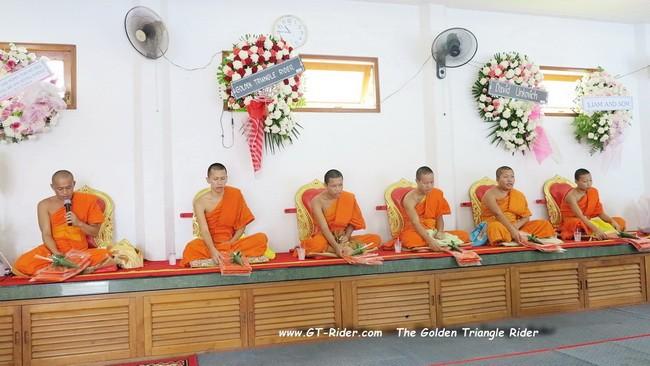 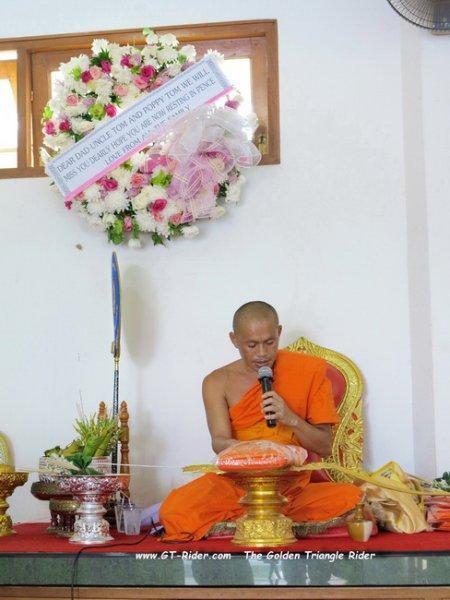 who after the funeral, expressed the opinion that it had been one the warmest most sincere emotional funerals he has ever conducted, such was the warmth & compassoin shared around by everyone.

The 73 people who came 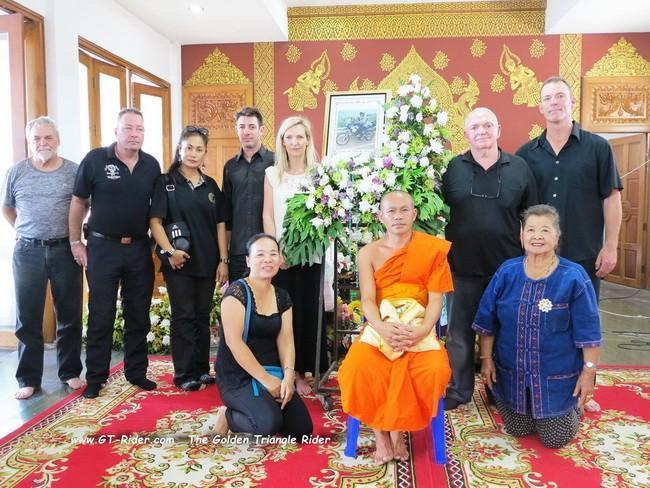 Tom's family with Con, the last guy to share a burger with Tom the night before.

Final prayers before moving Tom on 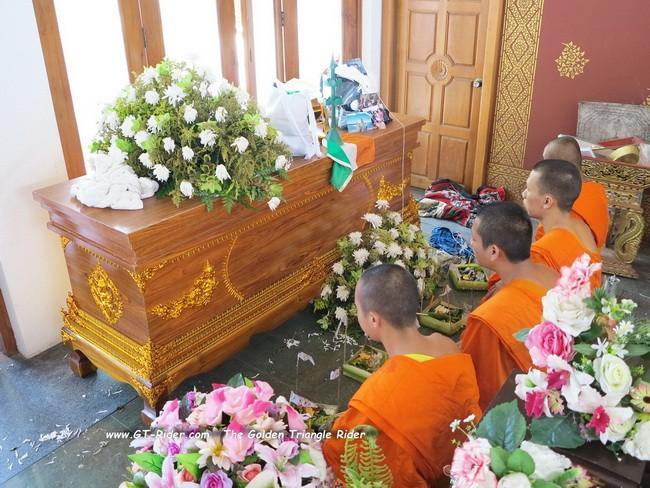 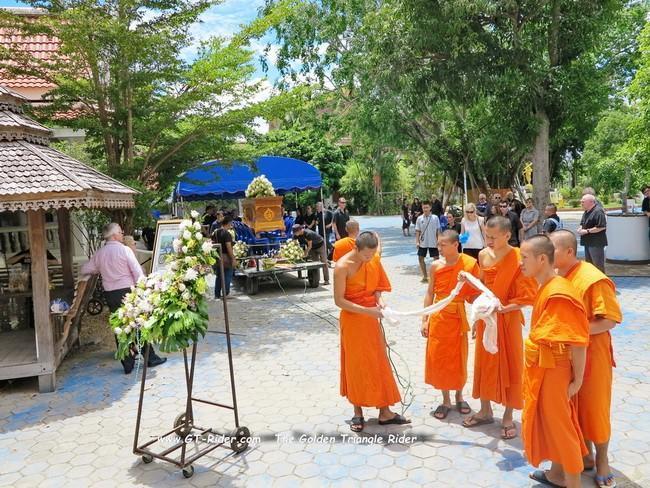 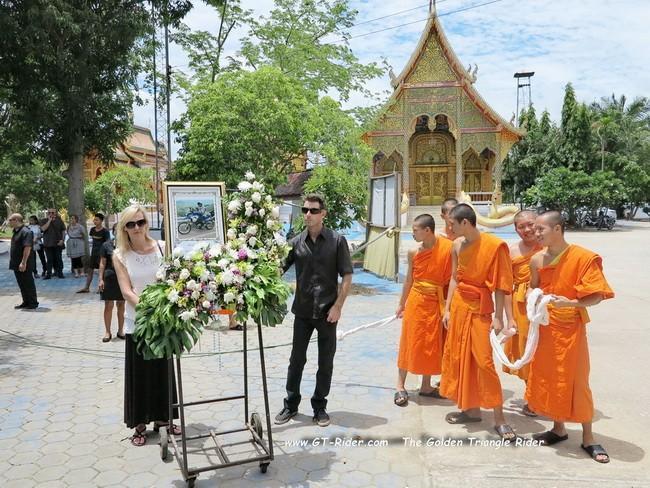 Bikes were lined up as a guard of honour for Tom

As his coffin passed, engines were revved up & horns tooted to make sure it was a rousing send off 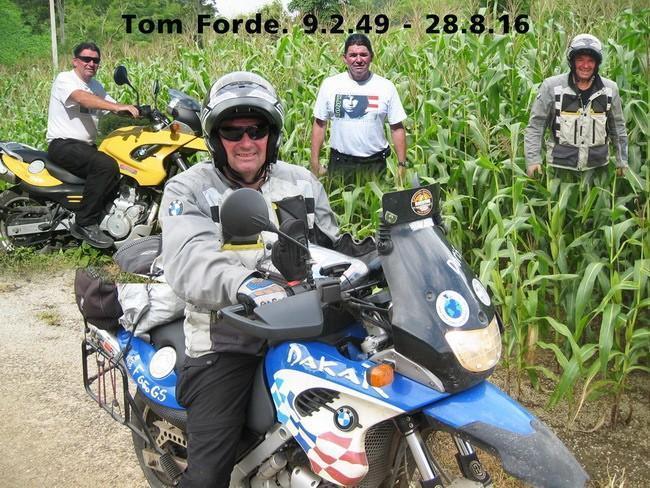 The funeral wake to celebrate Tom's life & adventures held at the Bamboo Bar in San Sai.

Despite the occasion, this was a seriously enjoyable evening & I believe that Tom's family all felt as if they suddenly had an new extended family in Chiang Mai. 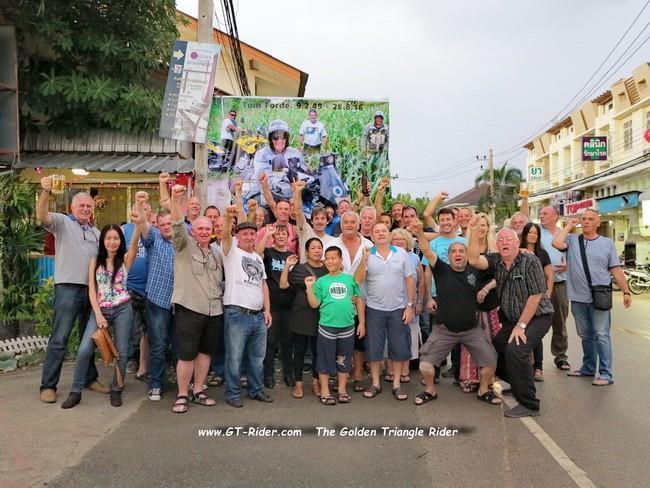 Thank you thank you everyone who came.

A special mention must be made of

Tony Stride for his brilliiant efforts in handling the events in Phayao, for without you, we would have never got to first base organizing the funeral & being able to set up such a smooth event.
Liam (Tom's best mate) & his wife Nom
Tim & Veronica for organizing everything in Chiang Mai with Tom's family & the Australian embassy.
Joolz Price & the Bamboo Bar in San Sai for hosting the wake for Tom.
Kirstin at the Australian embassy for some sterling work, perhaps above & beyond the call of duty​
See you all on the next GTR Mae Hong Son Loop memorial ride.
The TJ John Hamilton – Simon Siinthai Grant Memorial Ride # 7

If ever a funeral could be described as a "good" funeral - this has to be one.