Just in from 3N4D on the Mae Hong Son Loop-
Whilst it's generally wet out there, it was nice a ride between showers all round the loop.

Getting away from the super at 3.45 PM for a quick ride on R108 to Mae Sarieng for the night.
100 kms out I stopped in Hot to put on the waterproofs at the PTT & have lunch - a bottle of Gatorade, a Birdy & 2 Beng chocolate bars.
Putting the waterproofs on was the right decision because less than 5 minutes later it was bucketing down on those nice twisties beside the Mae Chaem river, so I was not able to really enjoy that bit of the ride.

After the Mae Chaem turn off it was only wet 'n greasy up to the ridgeline where after it was overcast but dry. The road was good & nice & clean, such that I could not be bothered to stop & take off the rain gear.
However by Mae Ho & the descent into Mae Sarieng I'd had enough & thought that if I left the waterproofs on I’d be nice & sweaty by the time I rolled up to the hotel in Mae Sarieng. So off they came 16 kms out of MS.

In Mae Sarieng I checked into the Fawlty Towers “Riverside Resort” on account of the fact that last time round sweet Ben from the Sawadee Restaurant had just taken it over with the joint thoroughly cleaned.
Happy Hour was at the Riverhouse Resort & dinner was at the Sawadee with Ben, where she revealed her lease & management of the Riverside Resort had lasted a mere 2 months. Oh well back to the drawing board & next master plan for the sabai life in MS. At least the Riverside Fawlty Towers was a lot cleaner.
Anyway the night was a good one, where I ended up closing down the Krua Gan Eng Pub & Restaurant with Miss Tukta, Ben’s beautiful friend from the Goodview next door to Sawadee. I then fled the scene when the girls suggested another hour or two in the Goodview karaoke at 1.30 AM. No thanks. Good night & see you next time round.

The next day it was on the road by 11.30AM & heading for MHS.
R108 was in magnificent condition

&
it was a perfect dry run all the way into MHS.

I met these guys on the road looking for GT Rider membership, but politely declined their application....

but I was impressed with their signage!

Again I was incredibly lucky with the weather, lucking out & sneaking through on this rainstorm pictured below.

In Mae Hong Son it was the Piya Ghouse, a But massage at the Baan Thai, plus dinner & drinks at the Crossroads with Franz. Followed by a late night at the Chalet Disco. All in all another hard day at the office.

Joy's got a new coffee house right beside the road outside the Soppong River Inn, to make it even easier 'n quicker to drop in for a hot cappuccino or two on the way through.

Franz who left a day earlier than me had a wet ride all the way back, but still managed a very respectable 4 hrs MHS - Pai - Cnx.

What I enjoyed about the loop in the wet was, except for part of the 1st day, doing it without having to wear the rain gear all day everyday.

MHS - Cnx was dry except for heavy showers going over the mountain Soppong-Pai, & Pai Mae Sa. It was incredible sometimes you were riding into sunshine, and then the next corner was either misty rain or heavy showers. 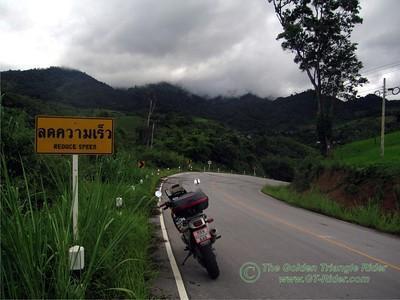 All in all extremely enjoyable & I was very happy to pull off MHS - Cnx without having to wear the rain gear.

Keep riding, despite being the wet season, its good fun out there on a motorbike.

Your trip comments and pics reminds me of the recent trip and most of all it makes me feels incomplete as the I was unable to stop more frequent to appreciate the lovely mountain view.

I intend to ride again up north perhaps on a slightly different route...ie. Tak to Mae Sot and then proceed to Mae Sariang before going to MHS. The intended trip will be early 2009 as one of my friend has bought a Kawa Versys for the trip as his existing ride, Kawa ZZR1200 is not suitable for the trip...btw he's 65 yrs young and fit.

Hopefully I wiil be able to get more guys join me for the trip otherwise
I ride with my veteran buddy or even solo. The wonderful trip up north is worth all the effort & time as it is still the best place to ride in this part of the region.

I would like to ask why is that the local banks' website for sale of foreclosed properties...ie apartments in CNX are all written in Thai?

A couple of other developments in MHS.
La from the Sunflower Bakery Restaurant & Tours has taken over the Lakeside Moo Krataa restaurant & should be having a opening in the first week of August. The new joint will NOT be a moo krataa & I wish La well with his new venture - almost anything would be an improvment to the poorly run place that was there before wasted in Mae Hong Son's "best location" beside the Jong Kham lake.

The Water Bar in the main street, just 50 metres from the main intersection by the Crossroads Bar, has closed. Um / Ganya from the Baan Thai massage has an "option" on the lease for the ex Water Bar & is looking for partner(s) who want to join in with her to develop a nice little cafe "pub & restaurant" on one of the best locations in Mae Hong Son.

Lipmeng I dont know about an English language website on properties repossessed by the banks in Thailand. But I do know of a 7 rai property in Chiang Khong, 400 metes from the main ferry landing, "reclaimed" by the bank, with full title deeds & "cheap." The buy of the century in my opinion.

Hi David,
Thanks for the report and pics. I had a very similar ride back from CM on Friday, stopping at Petchabun, and on to Khon Kaen Sat am. Also very lucky, kept riding towards these huge black clouds, but magically, the road always seemed to bend away towards the blue sky at the last minute.
Very clear air, very bright colours in the hills and the Sky, rainbows, heavy rain in the valley below, wet roads with blue sky above.
Entirely agree, this time of year has much to offer compared with the dull safety of dry dusty roads, and haze or smoke covered hills.
Sorry no pics this time, always expecting that big black cloud to dump on us, must be more optimistic.
You must log in or register to reply here.
Share:
Facebook Twitter Reddit Pinterest Tumblr WhatsApp Email Share Link
Top Bottom