A Failed Attempt at Reaching Emerald Pool via the Back Roads.

Fed up with trips to the hospitals with illness and for getting vaccines I thought I would use a break in the rainy season to get out on the bike and go somewhere new. Since seeing pictures I have been keen to get out to Emerald Lake in Lampang Province and used Google Maps to help plot a rather different route. They showed a road, a less than 2 hour journey, what could possibly go wrong? Being in Doi Saket for yet another doctor visit I plotted a country ride through the mountains east of the 118 and down to Chae Hom, first on the 3005 past Doi Saket hot springs (like everything, closed for Covid), up through coffee country on the 4063 (almost everything shut) and out onto the 1252 heading to Pan.

After a hard nights rain the route was wet but the sun broke through to lighten the mood and the joys of the forest on this road are hard to ignore. At the junction I turned left onto the 1287 and then right onto the 1035 until I got to Chae Hom Witthaya School which is about where the roads stopped having numbers and the signs were all written in Thai. By asking for village names taken from Google Maps I find my way onto the 3155 and after about 10 kms a right onto the 4005 into Ban Mae Tan Nai and onto Wat Ban Hai where I ran out of signs altogether. Sure I was on track and doing well I stopped at a m'bike repair shop and asked the boss and his wife if this was the road that would take me all the way out to Ngao. "Yes, this is it, straight on, keep going" Then as an after thought the wife told me the tarmac ended just around the corner and it was dirt and stones. I was on the bike, pulling away when she added, "I hope it doesn't rain".

At first it wasn't too bad but as the miles passed the track deteriorated and once I got off the flat and into some hills I was having doubts if this was the good idea it once looked. But I carried on. After an hour of dry road I hit the first of the deep puddles in red laterite clay and without being able to see quite where the wheel tracks led I got into a mess and down I went. It was red mud all down my left side and a real struggle to get the bike back up and out the bog. At the next big village, Ban Piang Chai, I stopped at a communal village water supply, cut the top of a plastic 2l coke bottle and washed myself down. Everyone laughed and a woman I reckoned to be the local teacher told me to go back. 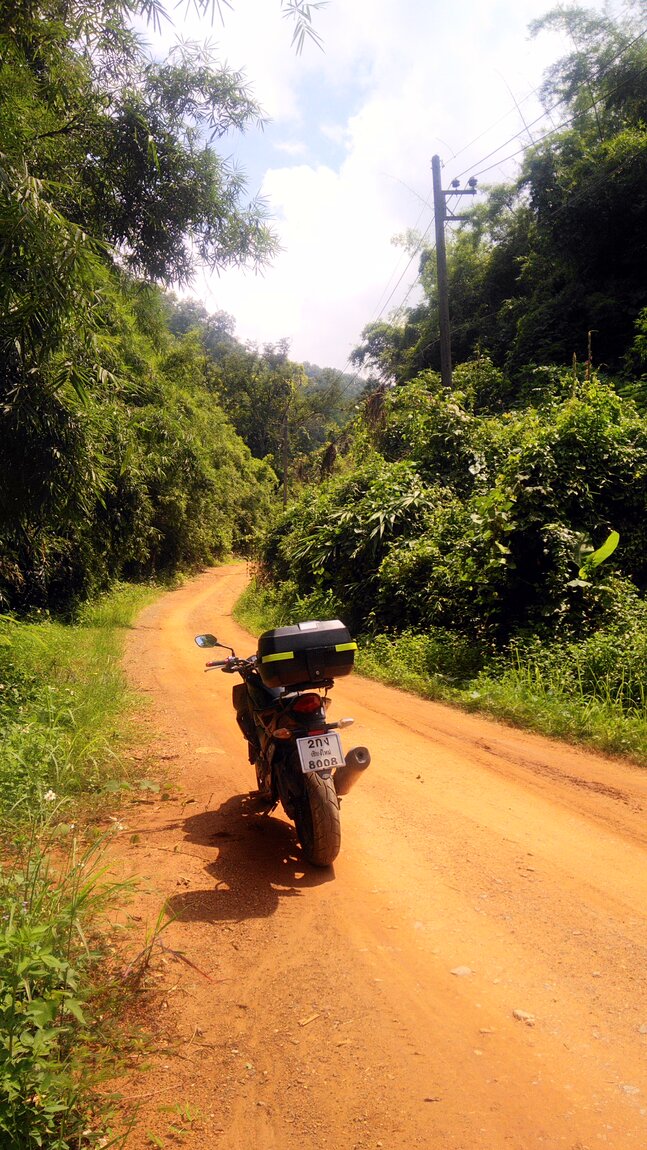 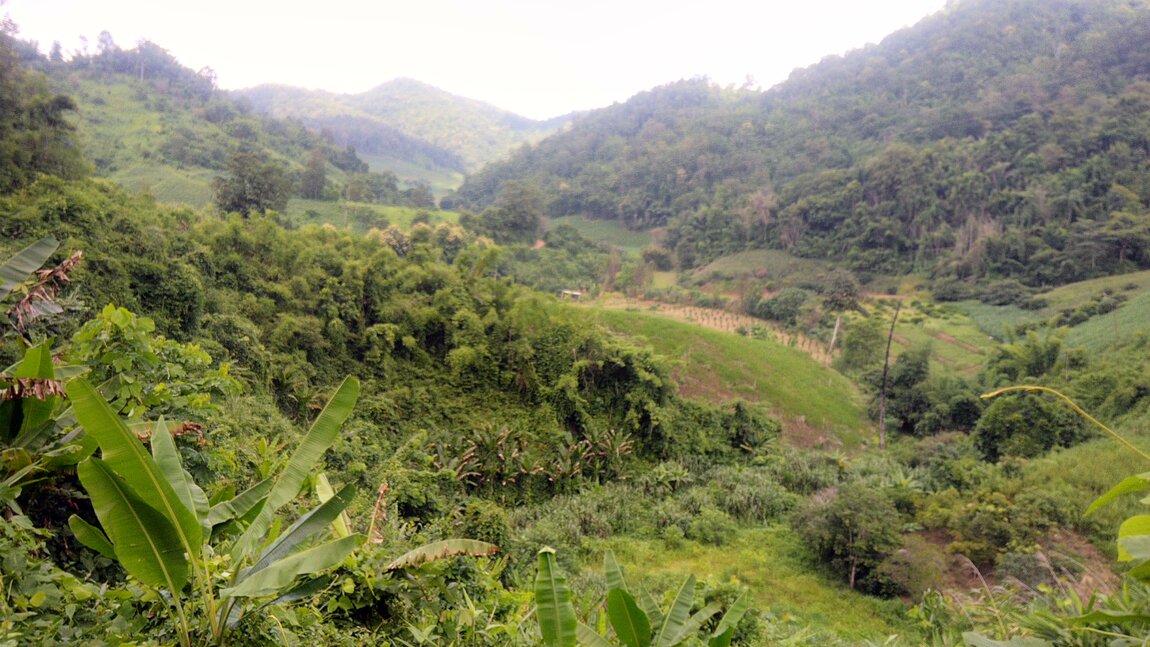 But fool that I am I carried on. Nearly another hour and I was into some steep slopes and rutted clay when the sky blackened and it pissed down. The track now converted into a stream and then a small river and with red water pouring down the track I had no idea if I was in 3 inches or 3 foot of mud. Down I went again and this time I couldn't pull the bike up it was somehow stuck in a deep rut. This was now full panic. A 70 year old man, bike laid out in deep mud and water, the heavens opening and no sign of any local village or hope of a passing vehicle. I finally worked out I had to drag the back of the bike around 90 degrees, get it onto flatter ground and somehow get enough grip on the slick mud to get upright. That done I carried a another mile or so and came into what I think was another Karen village, Ban lao Su, where I took shelter in a guys tractor shed. I must have looked a truly pathetic sight. "No good going on, you have to go back" No doubt in this guys mind, "not a chance of getting down the steep slopes further on". So thats what I did, nearly 2.5 hours of doing it all again in reverse. Lots of near disasters but I didn't go down again. On coming into the first Thai village on the hard road I pulled up at a roadside tap and hose and asked for its use. The local kids came out to watch and from under a mass of red mud and slime out came a old Falang and a black Honda CB300. They had a good laugh at me hosing myself down right from the helmet to the boots. I then took the long way round to Phayao in the hope of meeting up with David Andrew and his local buddies and got there to find them all at the end of a long lunch and drinking session which I was too late for. It really wasn't my day. Both mirrors were knocked loose but didn't break, the gear change lever was bent and the black plastic body work now has a few more red undercoat spots showing. A few bruises, an aching body in the morning but no real damage, so quite lucky.

The next day it was sheer joy to be out on the Phayao - Doi Saket highway with smooth tarmac, the bike in 5th gear and not a bucket full of laterite clay in sight. I must admit the hot springs looked tempting to a man who still felt he needed a proper wash but I passed on it. Now, if anyone asks me about Google Maps and its less than 2 hour journey on a road that really doesn't exist I may just get a bit excited.
Last edited: Sep 4, 2021

55 great report Steve. I've been wondering about that road acros to Ngao for a long time. What was it like to day?
And now you've saved me a lot of stress and trouble = I'm glad it was you & not me.

That route is probably one of the "last mystery roads" of the North?