Vassana and I went on a 12 day bike tour with Himalayan Roadrunners from Kathmandu to Lhasa in Tibet with a side trip to the Everest Base Camp. This was a challenging but highly satisfying trip with some great riding and spectacular scenery. There were 6 of us on this tour and we were riding Royal Enfield Bullet 500s. These tough bikes were well suited as we did not need great speed or power. We rode out of the Kathmandu Valley which was very attractive up into the mountains and crossed the border into Tibet. Then after staying two nights in Tingri we had acclimatised to the altitude and took the dirt road for an 80 klm adventure across to the Everest base camp at over 5,000 metres. Then 100 klms back to the main road again. This part involved frozen river crossings and dry river bed sections as well as flat dirt riding. The massive north face of the tallest mountain in the world takes your breath away. Then we crossed several more passes over 5,000 metres on the way to Lhasa. The constant views of snow covered peaks were wonderful with great expanses of space across the high desert. The Tibetan people we met were all super friendly and invited us into their homes. The bikes were reliable, well prepared for the trip and we had a support vehicle with spares and a couple of excellent Nepali mechanics. Himalayan Roadrunners have been operating for many years so know how to do these tours and our tour leader, Rob Callander has been leading tours around the Himalayas in several countries for twenty years. We had no breakdowns and with a good group of experienced riders, no-one fell off. We visited several Tibetan temples and remote villages along the way. A trip of a lifetime really. How many people have ridden a classic bike to the highest mountain in the world? 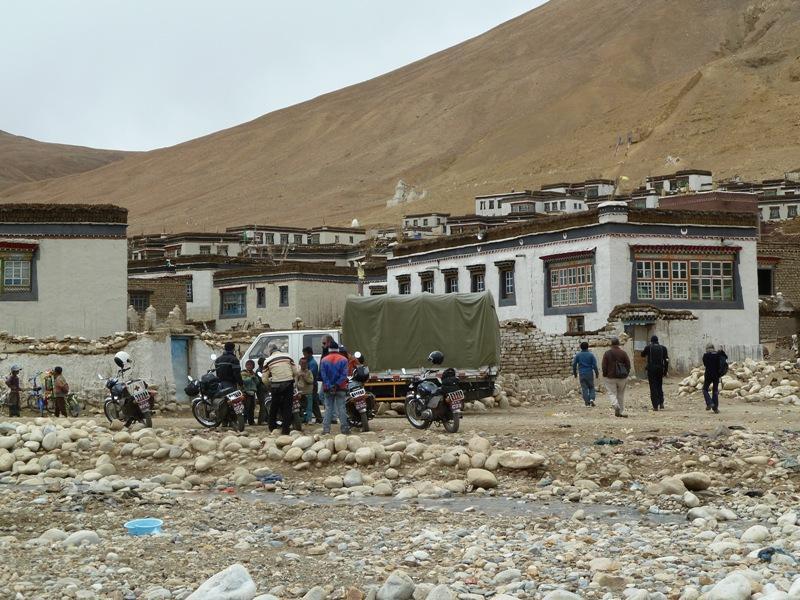 me and ED at Everest

another great view of Everest

how to survive at Base Camp 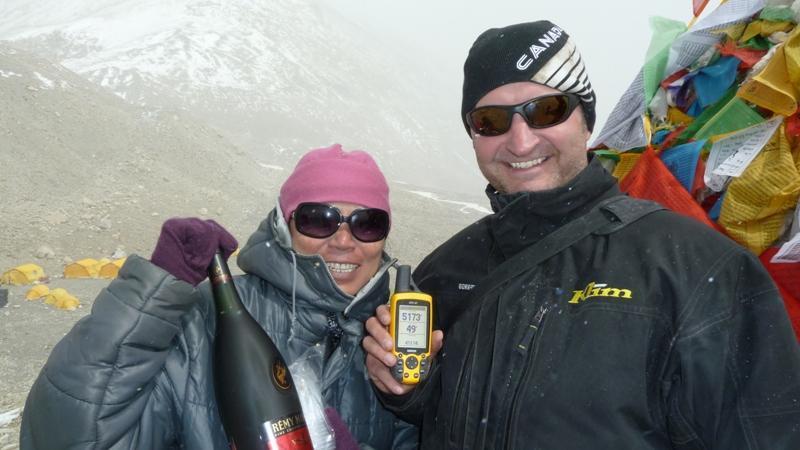 Me & Vassana at Base Camp 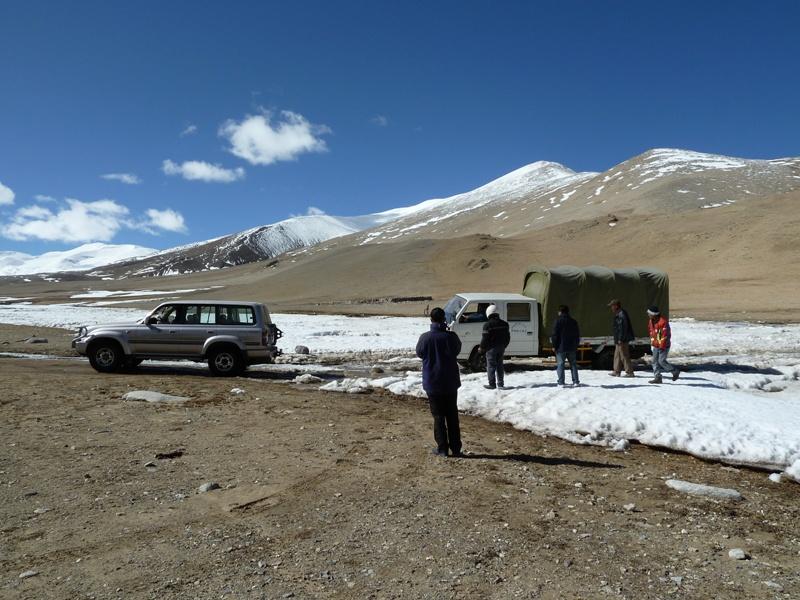 support truck towing out of a part frozen river 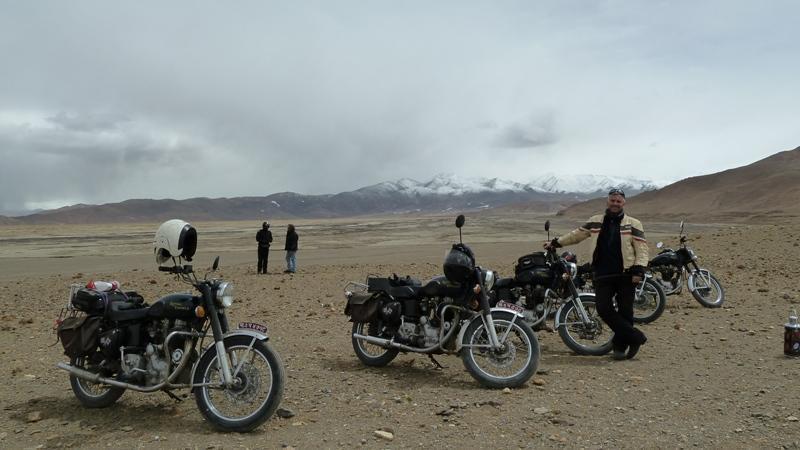 no roads out here

PangLa pass and Everest behind 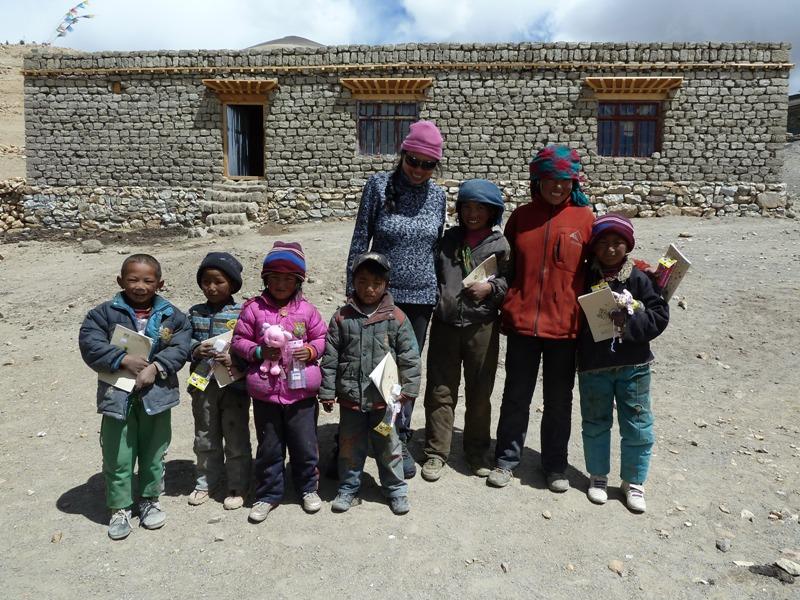 Vassana took books, pens and toys for the kiddies 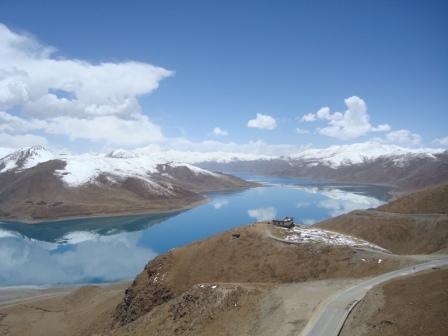 note the ice hanging off the bike 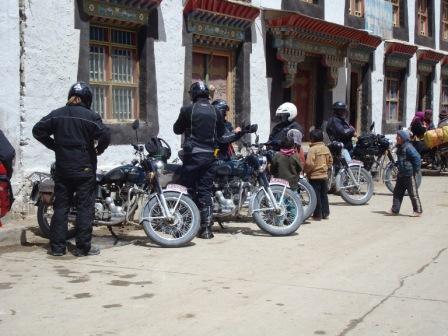 translation on a chinese tour 4 x 4 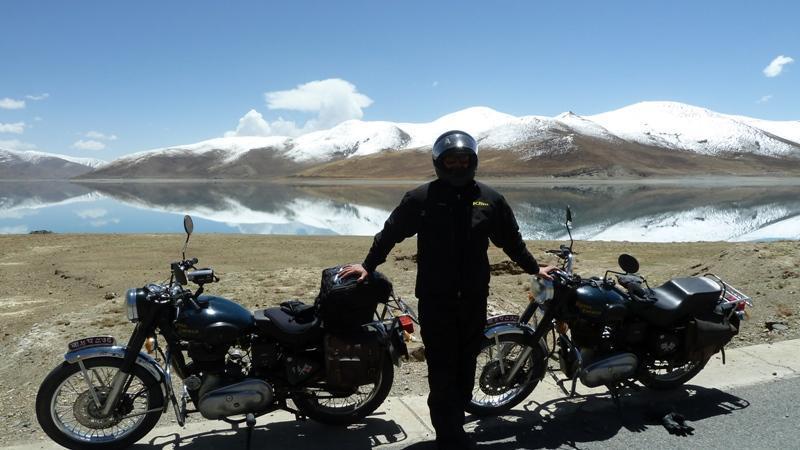 down by the lake

If you want a great adventure somewhere different, then try riding the high roads of the Himalayas.
contact Rob at the Himalayan Roadrunners, see link below;

This is fantastic. Combining my love for the Himalaya and bikes is a dream. Many thanks for posting.

What a Ride, Great Trip and Photos! I wouldn't be to keen on the Right Hand Gear change though? I have only ever ridden with it on the left! Fantastic untouched Scenery! Lucky to have experienced it! Look forward to meeting up when You get back to L.O.S.

Some really good photos! Thank you Ian for posting. Have a soft spot for this company - Thanks to Rob & Ed I'm here in Thailand now! Did a trip with them in November 2004. Right hand gearchange does take a bit of getting used to, but these bikes are quite forgiving! My last experience of right hand change was in 1975 on a Norton Commando & prior to that 1971 on an AJS 350 - you would have liked that one Ian Yanok - big single cylinder that fired about every lamp post & had a total loss lubrication system. One way to remind yourself would be to put a big piece of coloured tape on your right hand glove! My only problem would be starting the bugger - I had enough trouble with two good legs - with this bad right leg it would be impossible! Would need one with an electric foot that's for sure. Could get Fon to try & start it, but if it kicked back - at only 48 kilos - she might never be seen again!

Great report and pics thanks for sharing.
I was looking into doing something similar at one stage.
F

Ian, what a fantastic ride report and marvellous fotos !! Must admit getting a little bit jealous in seeing you doing this trip 55555555. Did you have any troubles with the elevation, both your G/F, yourself or the bike ? Cheers, Franz

I'm used to right hand gear change, so no problem there, but it was one up, three down, which I had to think about as I'm mostly used to the other way.
We took Diamox medication every day to prevent altitude sickness and stopped in Tingri, about 4,500 metres high, for a couple of nights to get used to the altitude, so no-one suffered from this, but it does happen occasionally on some of the tours up there. We saw a lot of chinese tourists using oxygen in cans, but this is only a short term fix, the problem is really the pressure change as well. HRR carry a gamow bag for this, that you go in and get pumped up, so you get pressurised and this is very effective apparently.
The lack of oxygen was noticeable walking up hotel steps at night, you quickly got out of breath. On the bike of course you have an advantage over car passengers, as you get a good blast of air in the face when riding.......
Didn't have any issues with the bikes, but there is a trick to starting them with a decompressor lever and good hard boot. The mechanics were always around to help with starting or plug change if the carb got flooded. I had a headlamp glass smashed by a stone kicked up by a passing 4 x 4. I also sort of lowered the bike on it's side, when I lost grip up the top of one snowy pass, but crash bars on all the bikes so just pulled her up again.
At the base camp and the morning after we had to pour hot water on the engines and ignition switches to de-ice before starting. HRR had experimented with changing jets in the carb, but we didn't this trip. On the top of the high passes, the bikes start running a bit lumpy due to lack of oxygen, but it wasn't a problem for riding.
What also interested me was that we had no problems with grip during the off road days, even with normal road tyres, I think cause the Enfields have a low C of G, but of course you dont hammer the bikes. Got to have some respect for the machine that's going to carry you to Everest and back.
The missus loved it, but we were a bit cold some days, being used to Chiang Rai weather.... She took over the kitchen at base camp and made Thai noodles for the group and mechanics which went down well.... of course we had the num plah and prik pon with us.....! A bit of spice to warm everyone up.....

Fair enough Ian - that looked simple enough! Next time there's one down at your place I'll bring Fon & you can show her how!!!!
R

Ian
Cracking good report that makes me green with envy as the ride appears to be epic not least ending up at the Potala.
I understood that they had closed Lhasa recently - were you aware of this or heightened security when you were in Tibet?
Having been watching the IRT [Ice Road Truckers] riding the roads north of S[h]imla the conditions were far from fun as Bungy and friends found.
What was you experience and how do the Enfields handle in chaotic traffic?
Once again thanks for taking the time to post and when is the next trip setting out?
Cheers,
Rhodie
N

Absolute dream of a trip... that one's earmarked... I'll do this someday.

Thank you so much for the report, I didn't even know about this.

Hi Guys,
Rhodie, The chinese did close the dirt road section to Everest soon after we went through for a day or so, some bigwig was going out there. They also close the Tibet border periodically, when they think there may be civil unrest. There's no certainty of what's going to happen out there.... makes it more adventurous....
The Chinese Nepal/Tibet border guards search everything and all baggage crossing. All trucks have to unload all their cargo. They're mainly looking for photos of the Dalai Lama..... a big NoNo. Took us a couple of hours to get the bikes cleared to cross, even with local agents to assist. You need to have your paperwork in order.
The weather was testing at times. As we rode up one 5,000m pass it started snowing. As we got higher, it was forming ice on the road, so we were riding dead slow with feet dragging and riding the edge of the road where possible. At the top, we waited a while to work out how to get down the other side. Then the sun came out, so we proceeded gingerly and after a few hundred metres got low enough to where the ice was melting. A real test of riding skills. On the tour we had a couple of guys from Canada and and very competent bikers from England, all in all, well experienced riders. You need that experience up there.
The Enfields are great tough bikes for this sort of trip, easy to handle and not too powerful. They are ok in traffic, but when they get too hot you need to get used selecting neutral before stopping if you can, same as old brit bikes.
HRR do several trips a year in the himalayas including Bhutan, which looks tempting... They just did a trip up to the remote Spiti valley and Ladakh, east of Kashmir, camping at night, as there are no hotels up there.
I think I might stay in some warm weather for a while though..... I can hear Laos calling again........
take care
Ian

By the way. Here was a tour group of well heeled german bikers, seen going the other way, from Beijing to Everest.

These bikes were made in China. The story goes that the german BMW designs were stolen / acquired by the Russians at the end of WW2, built under a different name in Russia for years, then licenced to the Chinese, where these were built, not sure how long ago. Look pretty cool though, if you like outfits.

Brothers fantastic ride report and marvellous fotos ,thanks for sharing

Great Trip and pics! But on some pics it looks very cold.
I hope on my next trip to nepal i can do a bigger tour with a motorbike.