Some info
The Panigale V4 is Ducati's first large-production street bike with a V4 engine, Ducati having primarily used V-twins since the 1960s, except on prototypes and racing motorcycles. They had sold a short run of 1,500 street-legal V4 Desmosedici RRs in 2007 and 2008 and made two protoypes of the Ducati Apollo V4 in 1964.​
​
The initial development of the Panigale V4 started with the 2015 MotoGP racing engine. Ducati said the Panigale V4 was designed to combine racing features, while also being an entertaining and rideable motorcycle with a durable engine. This created the challenge of designing an engine that could keep the MotoGP engine's counter-rotating crankshaft, and large bore diameter, but have the 15,000 mi (24,000 km) service intervals expected on consumer motorcycles.​
Originally, Ducati was initially keeping the MotoGP bike's chassis, but later changed to a completely new front frame they said has less weight and more stability.​
​
in spite of being a V4, the new Panigale is only slightly wider than the V-twin 1299, Ducati claimed weight is 10 lb (4.5 kg) heavier than the 1299, with foot pegs 10 mm higher. Unlike the prior 1199 and 1299 where the engine is the primary element of the frame, the engine is surrounded by a more conventional twin spar aluminum frame.​
​
The Panigale V4's electronics include a wheelie control system derived from the 1299 Superleggera, along with traction and drift control.​
The brakes have a new ABS designed for high speed cornering.​
Ducati and Brembo designed 70 g (2.5 oz)-lighter brake calipers than the 1299's.​
The bike's tires, the Diablo Super Corsa SP developed by Ducati and Pirelli, have a new rear compound.​
​
Engine​
The Panigale V4's 1,103 cc (67.3 cu in) desmodromic 90° V4 engine, unlike the prior 1199 and 1299 where the engine is the primary element of the frame, is surrounded by a more conventional twin spar aluminum frame.​
The engine is rotated further backwards than other Ducatis, so that the swingarm pivot is mated to the rear cylinders, rather than lower on the engine near the crankshaft.​
Unlike most street bikes and previous Ducatis other than MotoGP racing machines, the Panigale V4's engine rotates in the opposite direction of the wheels, counteracting the rotating inertia and decreasing the force necessary [bcolor=#ffffff]to change the bike's direction.[/bcolor]​
​
Panigale V4 S​
The Panigale V4 S is a more performance-oriented version of the base V4. It has an Öhlins suspension that the rider can electronically adjust, or set to the sport, race, or street modes typical of contemporary performance bikes. It also has a lightweight lithium battery, and forged aluminum wheels, reducing the bike's overall weight.​
​
V4 Panigale S Speciale​
The Ducati V4 Panigale S Speciale has the S model options, and adds adjustable footpads, an Alcantara-trimmed seat, a top triple clamp, carbon mudguards, a data analyzer system, and race fuel cap. It also has a titanium exhaust and race kit that Ducati claims increases the power from a claimed 219 to 226 hp (163 to 169 kW).​

In the workshop was one on display with the plastic off

Ducati Chiang Mai took the time to present their business & introduce their staff.

The presentation was top class professional.

They aim to deliver a first class service for Ducati bikes and with David Lek as the head mechanic, they have the best bike mechanic in North Thailand.

Ducati's presentation was so slick they even had Dovi on the big screen saying Sawatdee Krap Chiang Mai. 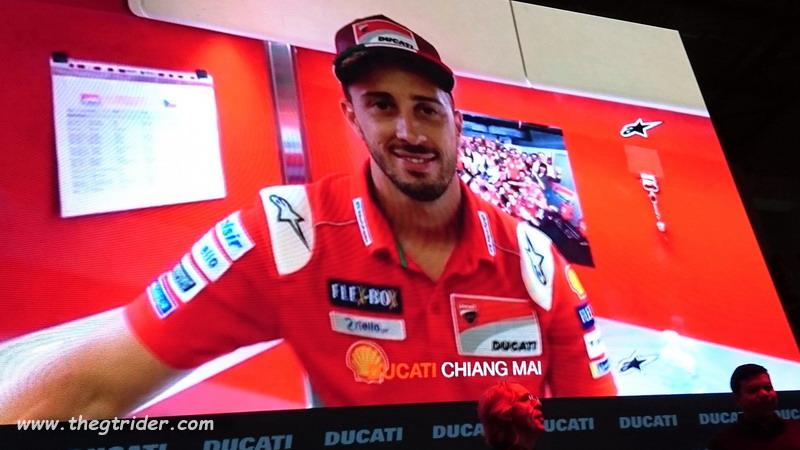 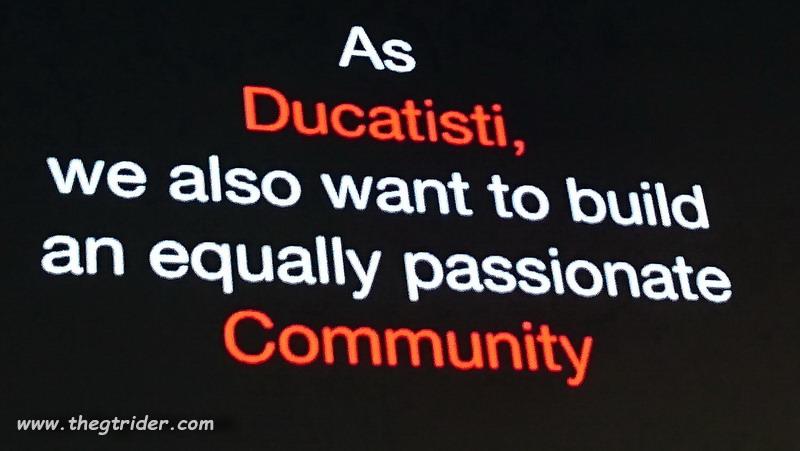 With Bungy & Richy, not together since the Chiang Mai Toy Ride events we organized.

the old hands now, with close to 80 years in Thailand between us.

With the Ducati bosses: Kevin, Pepper & Dave (from Bkk)

Wasa is the new Ducation Cnx employee, but she rides well and has competed in the BMW GS Trophy competitions with the ladies S E Asia team.

Back to the bike. Ducati Chiang Mai had a sale already & the first owner of the V4 Panigale in Chiang Mai was Khun Jay from Chiang Mai. 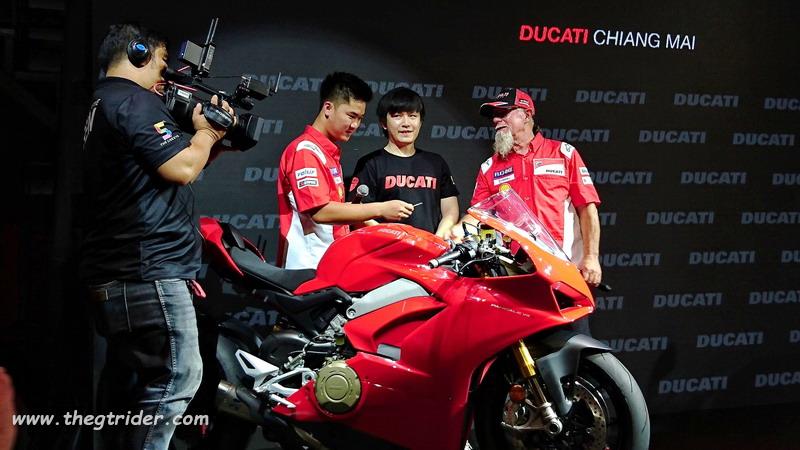 if I understand correctly, his Mum bought the bike for him. It's always good to have a nice Mum.

Brad from BDS Performance Suspension Tuning in Bangkok was up for the show.

Naomi was just back from Ducati Bike week in Italy. Some people get all the luck.

Being a Sunday it was MotoGP day, & they were some big screens to watch the show.

No expense was spared for the presentation and a top level band & singer capped off a magnificent night. They certainly starred & impressed the guys.