GUTHRIDGE. - Clinton Mark (Gus). Detective Superintendent Gus Guthridge passed away this week after long illness. Many of the older members of the forum will remember Gus fondly from the days when he and Nok operated the Downunder Bar & Restaurant in Chiang Mai.

Gus served the Australian Federal Police in various posts across S.E. Asia for many years, and was highly thought of and respected by friends and colleagues. A professional photographer and enthusiastic motorcyclist, he had a great passion for life and a huge love for his family. His friendship and unflagging sense of humour will be deeply missed by those who knew him. Our condolences to his wife khun Nok, his son Matthew and to Gus' extended family and many friends. 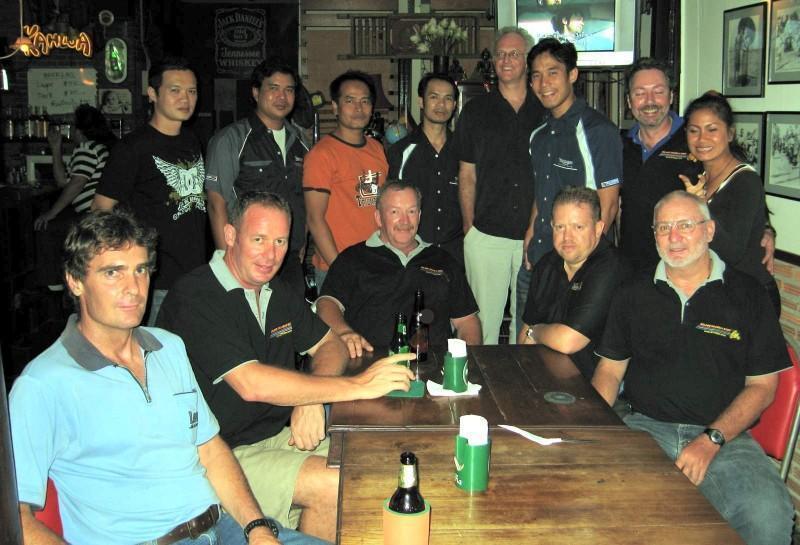 Gus Guthridge - front row, seated next to David Unkovich at a Triumph Motorcycles meeting in Chiang Mai. When he lived in Chiang Mai, Gus boldly rode a Honda CB150, but purchased a brand-new Triumph 650 on his return to Australia.

The Funeral Service for Mr Clinton Mark Guthridge was held at the Darebin Arts and Entertainment Centre, cnr Bell St and St Georges Rd, Preston on FRIDAY (Jan. 6, 2012) at 12 midday followed by a private cremation.

Rest in peace, my friend.

Thanks for that Post Ben. I was shocked to hear the News this morning from Pikey! Gus was a Real Character and Genuine "Good Guy". He emailed Me frequently and I never even knew He was Sick. He had a new "Street Triple R". I heard it was Stomach Cancer. Life is too short. Rest in Peace Gus! We will remember the Good times and see You again on the other side!
My Condolences and Best Wishes go out to His Wife Nok and Son Matthew.

Tragic news. I'm shocked.
Gus was a true friend, a wonderful person & family man for Nok & Matthew. His emails & photos were always a joy to receive, & to light up my day.
How cruel the world & life can be taking someone so suddenly. R I P Gus.

Deeply saddened by the news, I was wondering why I had not received any of his side-splitting emails recently.

Gus was a Top Bloke, great photographer [see Link removed], good restaurateur and true friend.
Jessie & I saw both Nok & Gus when we were in Melbourne not too long ago.
Nok without saying anything had put some thai-sustaining spicy meal for Jess who was having withdrawal symptoms, whilst Gus threw some meat on the barbie for us.
Afterwards, whilst the gals chirruped away in thai, he talked about his job crime fighting Somali & Lebanese gangs AND bikes. Especially the problems of riding a performance bike like his 675R Street Triple in a city festooned with speed cameras. I still remember him chuckling, as he said that the only way was to ride like you stole it and know where the gatsos were! Not something one expected from a copper. A commute time would take 45+ minutes on 4 wheels and he usually did it in 20!
His house still contained many mementos from his time in LoS, which they both hoped to return before too soon, as well as pictures of their son and many examples of his stunning photography.

Jessie & I send our deepest sympathies to Nok & Matthew, their family & friends.
Those who were fortunate to know him, will miss the passing of a biking brother and a very big character in spite of his compact size.
It’s typical of the man that he suffered in silence, as those who have already posted would have been all-too ready to have wanted to be “there for him” in whatever way he would of wanted.
Blue Skies & Fair Winds.

Great Photo Rhodie! Maybe We should have a Remembrance Column and Post a Picture and Report on those of Us Past? Like the Ulysses Club thread, "Ridden On". Not going on to much. Just a Good Picture and Brief description of the Person? Just an Idea Gentleman?

Nok and Matthew are in town and Nok has a ceremony planned for Gus at Wat Chai Mong Kon on the 28th at 1.00pm.

As she has lost contact with a lot of his friends here could you please pass this on to all that you know who had contact with Gus.