He kissed his mistress goodbye, in Phuket

[Not really a 'trip' report...just some thoughts & observations]

And I was sorry I'd missed a photo opportunity, as Keld kissed the bike's windscreen!

Arriving in Phuket, I was surprised when I first met Keld.
I'd previously only seen his photo posted in his 6/2008 Cambo trip report. He is a young guy, now in great shape, and looked nothing like the overweight guy seen in that report. Good for you, Keld!!

We got down to the business of me buying his F650GS. We had agreed on his originally posted price (200K-Bt) prior to my going to Phuket. He patiently answered a number of questions I had about the bike. All was handled in a friendly and gentlemanly fashion and he even gave me a load of extra BMW parts, plus filters, tubes, oil, etc. Pretty nice of him, I thought! As I got to know Keld, he very much proved to be an easy going and trustful person, and not someone who would ever stoop to making rash judgments of others he'd never met, unlike one poster on the BMW sale thread.

We then went and transferred the bike's insurance over to my name.

Late that afternoon, I began my journey back to Pattaya. I managed to go a whole 2-kms...before spending the next 3 hours at the police station!! I think everyone uses the width of their handlebars to assist when splitting lanes and judging clearances. Approaching a signal, in the dirt, left of the paved road, I heard a horn honking behind me. In my rear view mirror I saw a Toyota Fortuner with it's left side front bumper pulled out 20-degrees. Well, I soon learned that the aluminum TouraTech panniers stick out about 4-5" (10-13cm) further on each side, than the handlebars. I never even felt hitting his bumper and the blow didn't even dent the pannier, yet I was sure it was my fault as the bumper was intact when I passed the Fortuner. This was the first accident I'd ever caused in 50-years of driving, though more than a few idiots which have hit my cars back in the States!
The Fortuner was the airport pickup vehicle for the Avantika Hotel; I guess they won't be presenting an upscale image to new patrons for a while.
The local traffic cop escorted me and the Fortuner to the police station. An insurance estimator later arrived and I got tagged for 13K-Bt in damages (ouch!) plus 400-Bt for the report of the driving violation. I must say that there was never any hint of police graft. Everthing, though painfully slow, was done in a friendly yet businesslike manner. 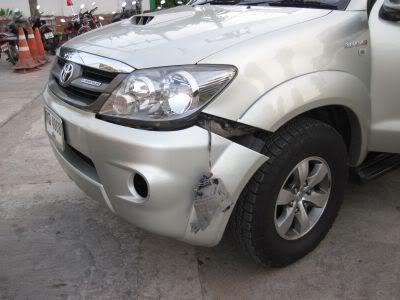 When I first arrive and later left Phuket, I held the same opinion. I don't like the place. It seem like a farang filled city with some Thai's rather than a Thai community. I much prefer visiting smaller villages than tourist centers. I had the same feeling when I spent the night in ChaAm. Yet, I did like Rayong and also discovered a brand new hotel which I thought offers excellent value. I'll report about it later in the Phuket Forum.

After leaving Phuket, I wanted to see what has been done to Khao Lak since the tsunami devastated that area. Just days after the event, I was one of 2 farangs that accompanied 50-Thais' (from Pattaya), 7-semitruck loads of supplies and 2-million Baht to assist those in the area. I was amazed at the amount of building that has since occurred and didn't even recognize the area. In Phangna they now have a memorial monument for the tsunami victims. I thought it modest compared to the magnatude of devastation and loss of life it represents.

Of the beach side tourist communities I passed through, I've come to the conclusion that Thailand must be the beachside umbrella capital of the world. Such as Thailand also holds title to having the most 711 stores, per population, having one store for every 1,700 people! Compare that to Canada 1:70,000 and much higher ratios in some countries. 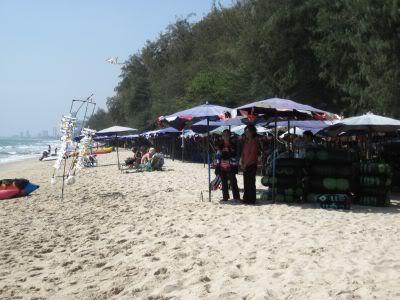 I made about 6 detours to observe some waterfalls. I was shocked. All but one demanded that I pay farang prices. My Thai license has always helped in getting Thai prices everywhere else in Thailand, but not along this penninsula. I think this is due to areas large number of tourists who will unknowingly pay the higher entry fees. Of course I made a quick exit. At the last waterfall the entrance was completely free...probably because it was also free of any water (dry).

After passing Samet Sakhon and seeking to get to Chonburi and onto Pattaya, the most harrowing part of the journey began. I somehow ended up lost in Bangkok. I had no idea where I was and kept driving around asking all who might assist my escape from Bangkok. Many kindly tried to assist me. Some drew directions; cops even lead me to areas from where they thought I could begin leaving BKK; two local shops had one of their employees lead me to a point where they had drawn maps, all to no avail. I was feeling hopeless! Due to the panniers on the bike, I couldn't split lanes and had to wait behind the lines of cars at each signal. I was wilting from the heat!
Finally a guy in motoshop gave me directions, in English, to get onto Rama-4, which I again managed to screw up and get lost. I stopped another local cop who then lead me to Rama-4 and I began my escape from Bangkok hell. I had spent 3-hours befuddled in Bangkok! At the turn onto Rama-4, at the Thai-Belgium bridge, I'd pulled off the road, to rest a few minutes under the bridge. With loads of cars entering Rama-4, some guy saw my bike and brazenly stops his vehicle, blocking traffic, just to give me his business card for his motorcycle accessory shop! Once on Rama-4, the ride home was easy.
In hindsight, I think I need to get a recent BKK map. I've been using one that I purchased 7-years ago and surely a new map will may well avoid my repeating an episode of BKK hell! :shock: Or, better yet, I just need to take a 'long-haired Thai dictionary' with me next time I venture into BKK

The Thai & cop that lead me to freedom, and the bike under the bridge

Addendum:
The bike rode great. No heating problems in BKK. And, now I have a red bike which matches my existing bike wear, making me a fashion statement. :roll: Though not suitable for the GQ magazine, maybe they'll want me to appear on Fashion-TV...well surely not, as I'm way TOO old, the wrong gender and definitely don't have tits.....:lol:

Congrats on the bike. Too bad about the accident though. In hindsight, would have been cheaper/easier to ship the panniers up to you. Oh well, at least you were not injured.

Morning Jay and conrats for your New beemer.

And again it was prooven how poor quality fortuners are,,as they are just normal pick-up's :wink: can't even take tiny tiny "kiss" from little beemer bike before falling a part... :lol: :lol:

anyhow, im sure you and your new "Missus" will have tons of fun and will ride long time together,

if you heading to this way,let me know and let's pump some fortuners here as well,,,,wel maybe not,,

Thanks for the very open and interesting, bike buying and collecting report, and echo feejers comments about you not being injured.
I hope you enjoy the bike. I am glad you found the purchase straightforward in the end, I followed the thread on the purchase, and it did get a bit 'unneccessary'.
Have you thought about a GPS, it has the advantage of constantly recalculating if you do take a wrong turn, which does happen to me in BKK, even with the GPS, because of the complexity of some of the multilevel road interchanges, not easy to see which lane to take before the junction, and some may have altered since the GPS map. BKK heat and traffic is bad enough without spending unnecessary time in there.
Also on panniers, on my FJR they were not too wide and certainly within the handlebar width, but the back of the bike when splitting lanes and turning in, does not always follow the same line as the handlebar and I always felt very restricted in that situation. That is why on the BMW R1200GS, I have made do with the topbox and a tankbag. Topboxes are easier to load and access as well than side opening panniers.
Just my pennyworth.
Concur with your feelings about Phuket, maybe a bit unfair as I visited on Christmas and Boxing day, so very busy. However I cannot say I am a fan of Pattaya either.
(Just waiting now for one recent contributor to ask what all the above has to do with buying a BMW, or is this actually a social networking site )
F

Hi Jay, once more congrats !! Finally she's in Pattaya, also glad that you like her handling, also not feeling anything while hitting the 'not so rich-important-famous but would like to be' preferred vehicle..... :lol: . I sometimes touch some fenders or they are hitting me on the FJR's panniers and I hardly notice.
In the end no one was hurt and that's the most important one !! Things can be paid for and be repaired......
Yeah, HKT and Khao Lak are getting too much two-tier pricing also for my taste. I always avoid these places, prefer Trang, Chantaburi and Cha-Am.
Concur 7/11 are too plenty and are the ones that really kill all the 'Mom and Pop' shops not what they always want everyone to believe that it's only the big ones......
So enjoy your new ride and servicing it !! Cheers, Franz

:lol:
Maybe not so funny at the moment, but I do like the match "german aluminium product" against "japanese plastic one"!.. What? Oh, sorry, not even noticed!..
But seriously, best of all: nobody injured... only your wallet, Jay!..

For sure BKK is a bit "labyrinthic"... But thanks to the thai people's kindness, you found your way...

Old? who is TOO old here?
After your flash-report, Jay, I bet the new trend on GT-Rider is going to be be: RIDE IN COLOURS!
:wink: