Comment: And here comes another Lao Motorcycle Ban entering the Lao PDR by the "Friendship" Bridge!

Will this make one less location to cross into Laos? Once the bridge is built no more ferries? No bikes over the bridge like the other "Freedom Bridges" seems like it is less freedom for motorcycle riders.

harrythefinn wrote: Will this make one less location to cross into Laos? Once the bridge is built no more ferries? No bikes over the bridge like the other "Freedom Bridges" seems like it is less freedom for motorcycle riders.
Click to expand...

My guess is - probably, until they realize that generally motorcyclists with big bikes coming to tour their country are worth having.
The problem is the agreements they make for managing traffic on the bridge - they dont want every man & his dog with a Honda Dream riding backwards & forwards across the bridge. So NO motorbikes.

(KPL) The 4th Mekong River Bridge Construction Project in Bokeo, which was scheduled to commence in May 2009 will be postponed to November 2009.
This bridge will connect Bokeo province in northern Laos with Chiang Rai province in Thailand.
The local authorities of Bokeo province told KPL News yesterday that the six month postponement was due to the fact that the Chinese government proposed several new policies to the Lao and Thai governments. The Chinese called on the two governments to waive taxes on construction materials, levy on workers and others.
While the Lao government has agreed to such proposals but Thailand is not able to make any decision because Thailand does not have a government in place and the officials said that they are not authorised to make such decisions.
The budget of the 4th Mekong River Bridge Construction Project is US$ 60 million, with Thailand and China footing the bill on a 50-50 basis. Laos is also paying a portion of the cost as it has agreed to compensate four billion kip to the 171 families who will have to vacate to another place as their houses are in the path of the bridge.
This bridge, 400 m long and 14.7 m wide, will span across the Mekong River. It will act as a linkage for four countries, Laos, Thailand, Myanmar and China and it follows that it will boost trade investment, tourism and transportation. Mr Thavone Voravouth, Director of the 4th Mekong River Bridge Construction Project, said that any delay on the construction of the bridge does not only incur losses in time and money but it could lead to a derailment of the project as the present global financial crisis is certain to adversely affect the governments’ coffers
B

The link is no longer valid. It now points to an article about a planned bridge across the Mekong at Champasak, to facilitate access to Wat Phu.

A fourth bridge linking Laos and Thailand across the Mekong River in the north of the country has been postponed again, pending the signing of a financial agreement between Thailand and China .

Director General of the Roads Department of the Public Works and Transport Ministry, Mr Luakham Somphet said the financial agreement was set to be signed last month, but was delayed due to the processing of documents by the Thai authorities.

The Lao and Thai governments will each contribute 50 percent of the cost of construction of the bridge, with the Chinese government will provide a grant aid to cover the Lao government's share.

Mr Luakham said the bridge's construction would cost about US$50 million.

Under an agreement signed last year, the Chinese government will provide US$20 million to the Lao government to help build the bridge.

“Our country is ready to build the bridge and we are waiting only for the Thai and Chinese governments to sign the agreement. We expect to begin working in February 2010,” Mr Luakham said yesterday.

He said technical staff from the three countries met earlier this year to discuss and agree on the project.

Survey and design work wa s finished last year. “We are ready to start clearing the construction site and have already negotiated compensation with local people affected by the project,” he said.

“We can not do anymore work until we get the all clear from the Thai side,” said Deputy Head of Office of Personnel Management of the Public Works and Transport Department in Borkeo province, Mr Phoukeo Sylipanya.

The project will help to promote communication between the three countries and trade and communication in the region, which is expected to improve people's living conditions.

The bridge would be 9km from Road R3. The design will be the same as the first international Friendship Bridge built between Vientiane in Laos and Nong Khai province in Thailand . The new bridge would be 14.7m wide and 480m long with two lanes, each 3.5m wide.

Currently the nations are linked by two bridges, connecting Vientiane and Savannakhet province to provinces in Thailand .

A further two bridges are planned for Khammuan and Bokeo provinces.

Vientiane - Construction of the fourth bridge linking Laos and Thailand across the Mekong River was scheduled to start in early March, state media reports said Wednesday.

The 480-metre-long bridge is to link the Huayxai district in Laos' Bokeo province to Chinag Khong in northern Thailand's Chiang Rai province.

'Now we are clearing land and compensating people who will lose their land, houses and farms,' Thavone Vorlaboud, deputy head of the bridge construction project, told the Vientiane Times.

'It is expected the bridge will be finished within 30 months after building starts,' he said.

The Lao and Thai governments are each due to contribute 50 per cent of the cost of the bridge's construction.

Laos received a grant of 20 million dollars from the Chinese government in 2008 to finance its half of the project.

That makes the estimated completion date Sept 2013. I wouldn't start making plans yet.

The dirty road immediately in front of the site

The official royal "Post Site" yet to be blessed, postponed once.

Slight movement on the river bank (there's a dog paddling while he still can. )

The real site on the river

It was an idyllic & glorious day, to be by the 'Khong

and I look forward to a return there once construction really gets underway, in the hope of a few more photos.

GPS Waypoint: N20 12.819 E100 27.106
9.3 kms south east of Chiang Khong & 1 km north of the confluence of the Nam Ing & Mekong rivers.
And if you have the GT Rider Golden Triangle map, just follow the narrow asphalt road that goes S-E of town to the Mekong, stopping just North of Pak Ing.

Davidfl wrote: Yeah yeah, not a lot going on yet....
Click to expand...

Maybe not on the Thai side but on the Laos side there are quite a few things going on. Just north of the site where the bridge will be built is a large new development called AAC Dream City. This includes a new hotel and casino smack on the Mekong and various other "tourist things" like a golf course, tax free shops, etc. The foundation of the hotel/casino was more or less finished a few months ago. Up into the hills there was quite a bit going on but the guards did not let me enter to have a peek.

Bridge development on the Laos side 16th December 2010.

There is also a master plan for a new Houei Xai City, just upstream / north of this bridge & resort - golf course development projects.

Lets Hope they Allow Bikes over it when Completed? My how Laos will change over the Next 5 Years!!! Look at the Last 5 and look at the Old Trip reports from the Past! Amazing!!!

Photos from the Thai side. 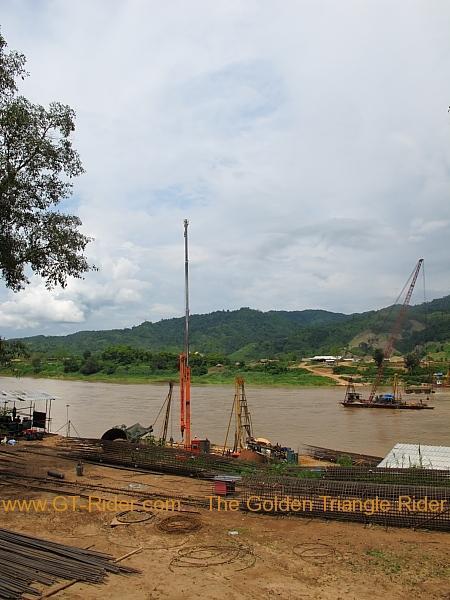 The bridge approach on the Thai side

A scenic view from 1 1/2 kms upstream

Vientiane - Construction on a bridge spanning the Mekong River between Laos and Thailand has been delayed by more than six months due to financial shortfalls, media reports said Wednesday.

The 480-metre bridge between between Bokeo province, Laos, and Chiang Rai, Thailand, was initially scheduled to be completed by the end of 2012.

"The work has been delayed slightly as project financing was impacted by the global financial crisis," Thavone Vorabouth, Deputy Head of the 4th Mekong River Bridge Construction Project, told the Vientiane Times.

The 44-million-dollar project is a joint venture between the Thai and Lao governments, with each side contributing 50 per cent of the costs.

The bridge is part of the Greater Mekong Sub-region&#8217;s economic corridor project that will eventually link northern Thailand with Kunming, China, via Road R3 in Laos.

The new highway approach from off Route 1021

The entrance to the bridge on the Laos side.

This is how it looks today….there’s plenty of work to do.

The KLX waits at immigration/customs.

Service was very slow, in the end I gave up waiting.

Me throwing my arms up in despair at the lack of service....just practising.

I get the feeling the new bridge, and immigration check point, are still a while away from completion.

Hello All,
Does any of you have any update on the friendship bridge?
Is the construction on hold or continue?
I love to visit chiang khong when the bridge is done.
I want to visit Laos with easy entry.
Please post any update.

koi;281693 wrote: Hello All,
Does any of you have any update on the friendship bridge?
Is the construction on hold or continue?
I love to visit chiang khong when the bridge is done.
I want to visit Laos with easy entry.
Please post any update.

If you look at the post from Moto-Rex 2 places above the date is June 2012, so it certainly does look like it is not on hold but still going ahead.

Well on 12.12.12 they had a party at the bridge for an official soft opening - the bridge was joined.
And that was it, the spans are complete.

Since then there's been a lot of speculation when the bridge will really open.

Take a look at the photos below & then decide - think again

Still a safety - keep out gap

needs a bit of landscaping. NO fencing.

Then you come to the Customs / Immigration / Bridge control centre

Power, furnishings, computers have all yet to come.

For my money its gonna be another 9 months yet.

What do you think?

And will they let motorbikes across the bridge - what a scary thought?

Hi Dave,
Did you just go for a nose around or are you planing to cross at any point ?

Unlike Nong Khai..
Looks like the lane change will be on the Thai side this time judging by the pic below

The Thai side is pretty flat this side of the Khong.. Lao side backs right on to the mountains..
Guessing this is the reasoning.

bsacbob;287634 wrote: Hi Dave,
Did you just go for a nose around or are you planing to cross at any point ?

I am planning to cross at CK Monday (18th) with some guy's
Click to expand...

It was part of a a weekend nose around

no trouble if you're not a tour group.

Ok, i will report back on Monday sometime...

Just to update crossed at Chiang Khong into laos this morning on three Thai registered bikes no problems at all.

bsacbob;287752 wrote: Just to update crossed at Chiang Khong into laos this morning on three Thai registered bikes no problems at all.
Click to expand...

Great to hear that.. Thanks for taking the time to keep us all updated.