Hua Hin has a small but noticeable biker scene with the Harley Davidson crowd. Every year a biker festival takes place known as the Hua Hin Bike Week. Located just off the canal road on a large patch of waste ground it rocks for 3 days. We sent Johnny, Rider and the local HHAD crew out to check it out.

The first day of the biker fest was on the night of the 5th December but being a day late was no sweat. On arrival things got off to a good start. Rider and the rest of us paid 100 baht to get in, yet he got his picture taken with a pretty wench! Never did see the photo though, his mysterious persona must of destroyed the evidence!

The Harleys were out in force, even at the day time. In fact they all went on a city tour at about 2 in the afternoon and were back by 4 pm.

Plently of stalls were set up with biker gear for sale, most of this was for cruiser type set-ups and leather atire for the hairy harley davidson brigade.
But food was available, the city-renowned Bintaburgers had set up a burger stall and that did thriving business as hungry bikers started roaming.

Kites were flying nearby too, not sure if this was for the festivities or just a kite dude doing his thing. 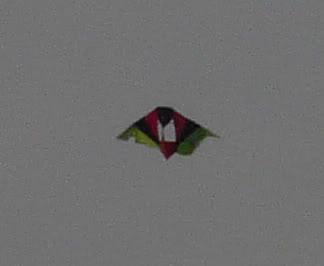 Then, when night fell, more and more bikers started showing up, mostly in small to medium groups but a few lone wolves in their custom machines made a scene and a roar as they arrived.

The biker gangs were out in force! As far south as Phuket and as far north as Phitsanoluk and beyond had journeyed to Hua Hin.

The Vampires organised pretty much most of the event as far as we could see, the band certainly displayed the name clearly enough and a fair few of them were roving about.

As far as security and safety was concerned the local police and Vampire gang did a pretty friendly and safe job. They didn't need to do much though, the crowd and atmosphere was carnival-esque and pretty soon they all got drinking with the rest of us!

The beer started flowing early on, there was no Tiger beer for the drinkers who liked the refined ways nor San Miguel for the lounge lizards, just cans of Chang beer!

While we didn't document a dossier on every biker chapter at the venue we did notice a wide range of bikers.

This brooding, lone biker of Nonthaburi Bikers seemed solo from his chapter house, a scout perhaps? He didn't say or do much apart from look mean from his beast of a harley. Which is kinda cool I guess. 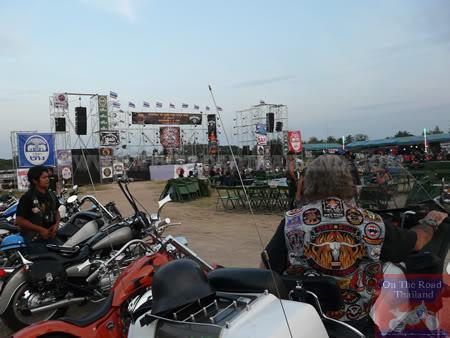 Then we saw the V-Bikers their were plenty of them around, bopping away to the music beat and who, arguably, had the best looking girls in tow.

The local biker chapter the Headstone Riders were here along with the Easy Riders. Some say they saw Phuket's benevolent but biker-lite crew The Sunriders but this only a rumour.

The band kicked off at about 8pm and got going soon after.

The Vampire Rock got rocking for hours into the night, table dancing and mooching was good from the get-go and yes that is a native american in the crowd!

All the while more bikes started arriving, they got more outrageous with each one that rolled in. First came the Batmans prototype Batpod!

Next came a bright and shiny assortment of custom choppers. 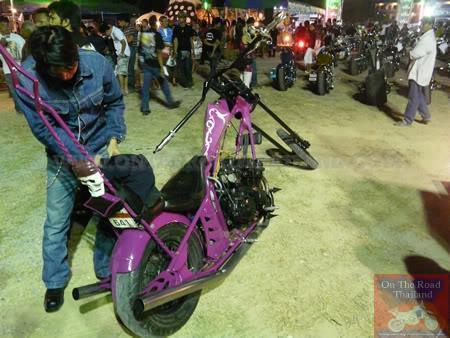 More Chrome than Chrome city's chromeworks for this next bike.

Then came the meek.

And then last of the bikers arrived.

Who surrounded this cool car from the classic car era of motors. He aint going nowhere! 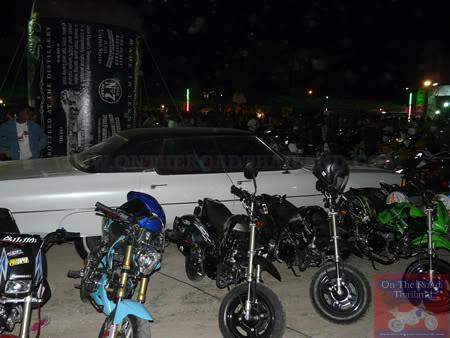 The party got really going when out of nowhere two coyote showed up with an eccentric showman and really got their groove going, along with the crowds! 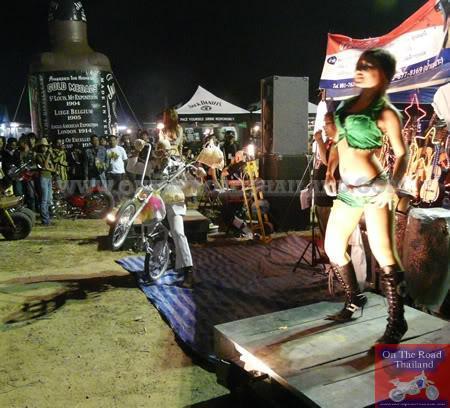 The festival finally winded down at about 3 a.m when we all staggered to our machines and blasted back to base happy but with very sore heads the next morning.

Getting to Hua Hin Bike Week

Hua Hin Bike week is normally held each year at the same spot, a large patch of wasteground located on the canal road. Once you get on the canal road there are a series of signs that the bikers will post in the previous days leading the way to the event. Follow the yellow signs and you'll soon find the venue then.

I've got about 6 videos to stick on the net but I'm still editing and chopping the footage etc.
And yes one of them is of the coyote girls doing their thing. Watch this, and the video sections space!

Source: On The Road Thailand.

Thanks for the report, well done, great pics! Now I know what I've missed, had to put my little daughter to bed around 11PM.
I was surprised at the american cars, looked like a seventies Cadillac and a Buick Wild Cat to me, guess it was a '74 model.
You must log in or register to reply here.
Share:
Facebook Twitter Reddit Pinterest Tumblr WhatsApp Email Share Link
Top Bottom