The signing was witnessed by Burmese President Thein Sein during his two-day visit to Laos.

The Lao-Burma border is defined by the Mekong River, which flows from southern China to the Mekong Delta in southern Vietnam.

In his talks with Lao President Choummaly Sayasone, Thein Sein agreed to join the Mekong River Commission as a permanent member, the Vientiane Times reported.

China and Burma now have observer status on the four-member commission, which seeks regional consensus on the management of the Mekong’s resources.
G

David another positive sign for Burma. With their democratic election result from the weekend and their new openness maybe we are just that little bit closer to getting our bikes inside. maybe......

Why not, I doubt either country will be paying for it.

Some of the officials might even get a merc or two out of it, so they can knock down poor people that don't matter in style.

Gary D;278124 wrote: David another positive sign for Burma. With their democratic election result from the weekend and their new openness maybe we are just that little bit closer to getting our bikes inside. maybe......

Laos and Myanmar have begun the construction of the first bridge to link their countries, and expect to complete it in 2015.

The building of the Laos-Myanmar Friendship Bridge over the Mekong River between Laos' Luang Namtha province and Shan state in Myanmar was launched after the two countries held a ground-breaking ceremony on Saturday, The Vientiane Times reported on Monday.

The construction cost is US$18 million (540 million baht) and the two governments aim to use it to boost trade and investment, and enhance cooperation.

The bridge will be 690 metres long and 10 metres wide and will have two vehicle lanes and two sidewalks. Construction of the bridge will take 30 months to complete.

Xaysongkham Manotham, director of the Laos-Myanmar Friendship Bridge Project, said the bridge will be a new symbol of cooperation, relations and solidarity between the two countries.

The Laos-Myanmar Friendship Bridge linking northern Laos with Myanmar across the Mekong River is set to open officially in early May - ahead of the original plan slated for August, a senior government official has said.

Construction work on the US$26 million project, which began early in 2013, is set to complete by March, the Project Manager Xaysongkham Manotham told the Vientiane Times yesterday.

Progress on the project and preparation for the official opening of the bridge were discussed at a ministerial meeting held on Friday at the project&#8217;s site.

Minister of Public Works and Transport Dr Bounchanh Sinthavong and his Myanmar counterpart U Kyaw Lwin led officials of both sides at the meeting held in Long district of the northern Lao province of Luang Namtha.

The meeting agreed on the revised opening date and pressed on the need to accelerate all necessary works to ensure that the works are done before the official opening, according to Mr Xaysongkham.

He added that the meeting touched upon the need for relevant sectors of both sides, including officials in charge of foreign affairs, immigration and customs, to work out all related procedures so that transport across the bridge between the two countries can begin once the bridge is opened to public services.

The ministers and concerned officials inspected the construction of border control facilities and roads approaching the bridge.

The bridge is built across the Mekong River, linking Thakhelek district in the Shan State of Myanmar and Luang Namtha province in Laos.

Built with a two-lane motorway, the bridge will be capable of accepting vehicles with a maximum gross weight of 75 tons and it can withstand earthquakes of up to 7.0 on the Richter scale.

Once opened for public service, the bridge is expected to significantly boost trade, investment and tourism between the two neighbours, whose current volume of trade is still low compared to other neighbouring countries.

Through the bridge, officials said the two countries will see smooth and speedy road transport contributing towards a swift flow of commodities, driving economic development.

The bridge is a joint investment by the Lao and Myanmar governments. The Laos-Myanmar bridge is 691.6 metres long and 10.9 metres wide.

So far, four friendship bridges have been built across the Mekong River linking Laos and neighbouring Thailand, with the bridges having reportedly caused a remarkable increase in two-way trade volume and tourism visits.
Click to expand... 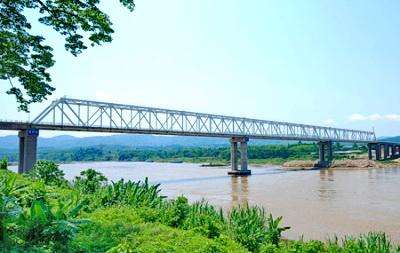 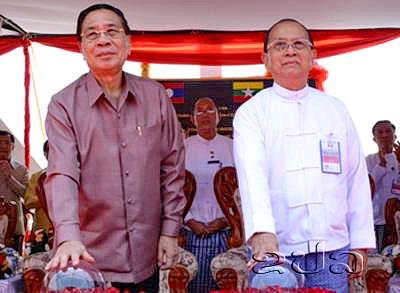 (KPL) The first ever Lao-Myanmar Friendship Bridge linking northern Laos with Myanmar across the Mekong River was officially opened on Saturday by President Choummaly Sayasone and his Myanmar counterpart Thein Sein.
The opening of the bridge was done in the presence of high-ranking officials from Laos and Myanmar, along with local residents from both countries.
“This bridge represents a noticeable achievement in cooperation between the governments of Laos and Myanmar,” noted Deputy Prime Minister and Minister of Foreign Affairs, Mr Thongloun Sisoulith, adding that the opening is a milestone in the history of friendship, close cooperation, trust and understanding of the two nations.
“I believe that this bridge will contribute significantly to economic development and communication as well as strengthen friendship and cooperation between Laos and Myanmar,” said Mr Thongloun.
The governments of Laos and Myanmar reached an agreement on building the bridge during an official goodwill visit to the Lao PDR by Myanmar President Thein Sein in March 2012.
A groundbreaking ceremony for the project was held in February 2013, according to the Project Manager, Mr Xaysongkham Manotham.
Equipped with a two-lane motorway and 1.2-metre-wide sidewalks, the bridge is capable of withstanding vehicles with a maximum gross weight of 75 tonnes and earthquakes of up to 7.0 on the Richter scale. It was also designed to allow ships of less than 500 tonnes to pass underneath.
The 30-month construction project cost US$26 million and was completed five months ahead of schedule.
The bridge, which is 691.6 metres long and 10.9 metres wide, is a joint investment by the Lao and Myanmar governments with each side financing half of the cost.
The Laos-Myanmar Friendship Bridge is located between Houay Koum village, approximately 13-km north from Xiangkok village, Long district, Luang Namtha province of the Lao PDR, and Kenglap, Thachilek district, Shan State of Myanmar.
The bridge is expected to significantly boost trade, transport, investment, communication and tourism between the two neighbours.
Increased economic activity and employment are also expected as a direct benefit for Luang Namtha Province.
With the existence of the bridge, the two countries are expected to witness smooth and speedy road transport contributing to a swift flow of goods, commodities and driving economic development.
The bridge links National Road No. 17 of Laos to National Road No.4 in Myanmar, and was built to both improve transit service and facilitate trade between the two countries, thereby bringing benefits to both nations.
It will also link the countries within the Mekong sub-region especially Myanmar, Thailand, Vietnam and China.
“The opening of this bridge is a historical moment because it is the first bridge connecting Laos and Myanmar and also the only international bridge built by Lao and Myanmar,” added Mr Thongloun.
The four international Mekong bridges that link Thailand and Laos have led to a remarkable increase in trade volume and tourism between the two countries.

Now wouldn't this be great if its was full international.

Told recently that Lao registered bikes will be allowed to cross up to 2 provinces in Burma.

Check out Jurgen's report on the bridge & the road

from Muang Sing to Xieng Kok on GTR here: