About 20 years ago, I had visited several times the remote city of Mae Hong Son, traveling by plane or by motorcycle. When I decided to do the tour again, I took with me a couple of faded out pictures, just to see what toll development had taken on that touristic destination. It is also fun to meet the same people so many years later and I packed a bunch of Karen Padang (long neck) portraits, in the eventuality that they were still there.

Usually, I travel alone, but for this trip, my brother Klaus decided to join me. He took an Honda AX1 out of his stall, so that we rode the same bike, quite appropriate along the 1420 curves of the Mae Hong Son loop.

This classical trip has been described in detail by several authors on GT-rider. I will thus only concentrate on highlights and focus on visits to the Padangs and to the flower fields (it was the right week for a full blossoming of the Mexican sunflowers).

After an early departures, I am always keen on a shot of fresh coffee and our first stop was at the beginning of route 1095, not long after we left route 107, that we followed since Mae Rim (Chiangmai). At eight o'clock in the morning the coffee machine had just warmed up.

Winding, diverse and with great viewpoints, route 1095 is an enjoyable and well known ride.

I had visited Pai, by car, about a year ago, and the changes were not a shock to me anymore. This slippy village has developed from a backpacker's “smoking heaven” to a full fledged touristic destination, where foreigners are looking for a lazy, peaceful environment and Thais are seeking an opportunity to wear a winter jacket, to speak about movies filmed in the region an places for shopping. Bikers get plenty of choices for a late breakfast and possibilities to rest.

My return to Mae Hong Son, after 19 years, was also amazing. I had to reach the centre of the city before recognizing some places. We stopped at “Crossroads” an appealing hangout for meals and drinks. It was a hardware store in the past but, now-a-days, seems to be “the place” to be. In the evening, I met David there, as he was also in town, and got some insider's advices.

In the winter season, people are flocking that province to admire the sunflowers. As it was a November week-end, guesthouses in Mae Hong Son were overbooked. Driving just a couple of kilometres outside, we found an enjoyable small resort, absolutely deserted. We were the only customers in Mae Nam Cottage.

Late afternoon is a good opportunity to visit the temple on the hill (wat Phra That Doi Kong Mou) and to get a panoramic view of the valleys on both sides. A little coffee shop on the mountain, with a terrace, is a good spot to relax whilst waiting for the sunset. 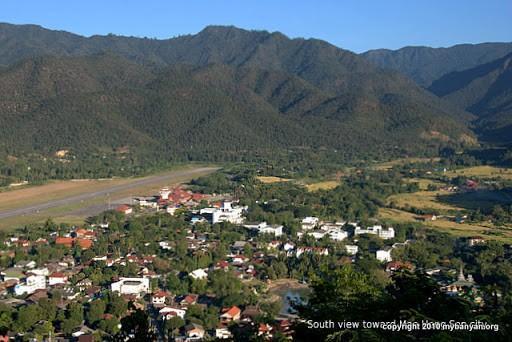 Mae Hong Son does not have a lot of nightlife (maybe we did not search hard enough). Strolling down the streets of the night market and visiting the illuminated lakeside temple (wat Jong Kham) is, nevertheless, a fun way to fill the evening.

Saturday, we departed from Mae Nam Cottage in the fresh morning hours, as fog was still covering the landscape. The only available early “coffee” breakfast was in Bayoke Chalet. This hotel has not changed so much in twenty years. It used to be my usual accommodation, quite cheap in these times, when only Tara and Holiday In were hotels of “international standard”.

In the past, all traffic would briefly stay still at eight o'clock in the morning, whilst the national anthem was played. At the airport, the runway could be crossed by motorcycle an joggers used it for their exercise, as there were only two daily flights from Chiangmai.

After breakfast we took the road to Na Soi (35 km) and to the Karen Padang settlement (Kayan Tayar) near the Myanmar (Burmese) border. We followed the old road and passed a “new” concrete bridge who has replaced the hanging one. Looking at my vintage picture, I wondered that I had no fear to drive a chopper across that, not really reliable, construction. The old bridge still exists, but can not be access anymore.

The road to Na Soi has undergone quite some improvements but, at the very end, the river Mae Soi has still to be crossed. It is the same concrete dam on the water level. During my last visit it was flooded but this time the path was perfectly dry. Twenty years ago, my hairs where already grey so that the only noticeable change is the helmet. Now-a-days, I take it more seriously.

Finally we arrived at the place where the former village was located. A barrier was cutting the road and there was no village in sight, only a couple of soldiers. I remembered the warning on David's map to check if the “long necks” were not relocated. Fortunately the guards indicated that the settlement still existed, just a walking distance away, it had been totally rebuilt. I showed them some of my old Padang pictures and they were quite amazed as they recognized the women.

We arrived in the Karen Padang village early morning and the families were busy taking breakfast. When I showed the old pictures, it created a lot of excitement in the community. I did not expect this, as I thought that the “long neck” women have been photographed so often, that they would already possess thousands of their pictures. They had a great pleasure to get these images and to comment about the destiny of the people who were no longer there, but most of them still leaved in the village. I deeply regretted that I did not bring more photographs with me.

We were of course very welcomed and spent time to discuss topics of the Karen's daily life. Several of them could speak some English or Thai, a real change compared to twenty years ago, when communication was near to impossible. One young man was very fluent in English, he went to school in the neighboring Karen refugee camp. 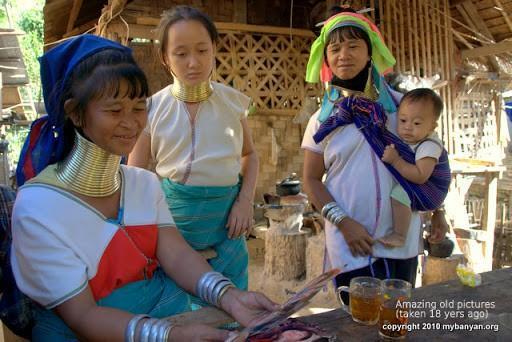 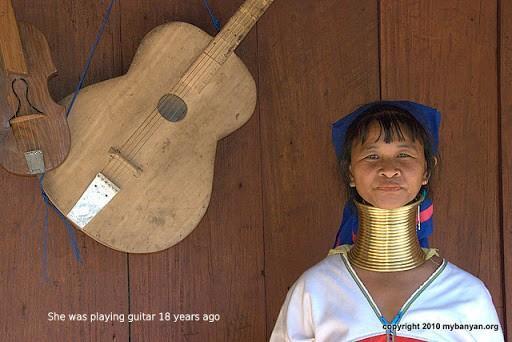 It was difficult for me to take leave of the friendly Karen Padang and I promised myself not to wait so long before the next visit.

The journey went on in direction on the flower fields, following route 108 till Khun Yuam. After a lunch in that city, we headed down route 1263 and drove up again to Mae U-Khor mountain, were the majestic fields are located.

The Mexican sunflower fields provide great opportunities to shot “postal card” views of one of the best known attraction of Mae Hong Son province. Thousands of tourists were enjoying the view and taking pictures. 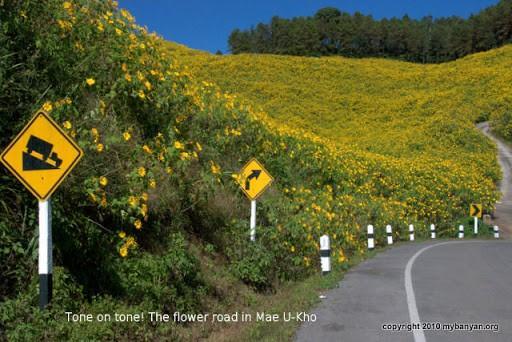 As it was already afternoon, we decided to "short cut" the tour toward Mae Chaem, instead of going back again and driving down to Mae Sariang. To avoid surprises we called a hotel and made sure that we get a room for the night.

Route 1263 is again a nice ride. As there are few coffee spots available, I was happy with a “Carabao” (it might contain it's share of caffeine). The only regret is that the way down to Mae Chaem, in the late afternoon, is against the sun. Driving in the opposite direction would be more comfortable. We crossed an amazing number (certainly more than one hundred) off-road bikers heading toward Khun Yuam. There must have been a big concentration somewhere.

Sunday morning we left Mae Chaem in direction of Doi Inthanon through route 1192. The landscape was again enveloped in heavy fog, till we reach some altitude.

Doi Inthanon, with his temples dedicated to the King and Queen of Thailand and the crowd, rushing to reach the highest point in “old” Siam, is worth a visit and route 1192, up from Mae Chaem, is quite interesting. The return journey to Chiangmai is just a “way back”. Nevertheless, I prefer the side road 1156 (over Lamphun) to the main road 108, but this is a question of taste, as the noodles that we had for lunch before returning home.

Beautiful pictures Juergen, I'm sure you 2 enjoyed this ride. I remember when I was there some 22 years ago it was still a little adventure to go to CNX over the weekend especially taking the Pai route, but nowadays very good roads.
Finally this post worked out I see and is not spammed or virus infected anymore..... :wink: , cheers, Franz

Did the that route in November but didnt bring a camera so really good to see the photos .Heading back this November but going to do a different route probably go to Laos from Chaing Mai.

Hello Black ... I always forget something when touring but my camera is part of my body ! There are so many great roads around North Thailand ... and I am lucky to be retired here! I also wish to go to Laos but as I have recently changed motorcycle twice, I never have the definitive papers to pass the border
You must log in or register to reply here.
Share:
Facebook Twitter Reddit Pinterest Tumblr WhatsApp Email Share Link
Top Bottom