Marco came to Khon Kaen for the bike party. Unfortunately on Friday night returning on his bike to his hotel, Marco had an accident.
The attached pic was early Saturday morning when he was in a lot of pain as little or no pain meds had been given, while waiting for a doctor in the government hospital. His wife had driven over from Ubon and was with him. Marco is now in much better condition but is still in hospital. Now at Khon Kaen Ram, but maybe soon moved to Srinakarin. He has suffered some broken bones in his shoulder and some ribs broken. Yesterday he stayed in ECU because Ram wanted to check no more internal injuries. I will see him this morning and report how he is improving.
He would probably want me to tell you that his bike is a bit better off than he is, rideable, with some fairly minor damage to the LHS, It attended the bike party on Marco's behalf as the accident was near the venue, so we moved it to the bike parking there.
Marco's wife is quite keen to be able to get him home which should happen in the next 2 or 3 days.

I am sure we all wish him a speedy recovery.

Get well soon Marco, I am looking forward to seeing that famous Finnish sense of humour back in action

Get well soon. Eddie The Eagle.

John, thanks for the information.

Lets hope you are up & about soon Marco, we need you on this forum to bring us your light hearted humour & fun.

Hi John thanks for letting us know. Hope that Marco will recover swiftly and please send the best regards to him...

mbox
PS: any idea what caused the accident?
F

Hey Busdriver, get well soon !!! John thanks for all the help & posting !! Ahh the Finns are tough ones, as soon as his bones are healed, he'll be back on the road, making again more kms a month than some people in a year on his German Bus. Rgds, Franz
D

Hey Marco Buddy, sorry for your misfortune, get a smile on yer face and get well.

Thanks for the info...though not good news, John.

I guess that Marco's BMW motorhome is not impervious, after all, to the wiles of driving in Thailand.

Ouch, those broken ribs will not make for a comfortable ride home with Bee.
But, the bad news is that the 141/83 heart reading, indicating cardiac hypertension, means less beer for you.

My best wishes for a speedy recovery, Marco...and you...and the motorhome should again be on the road in 6-8 weeks.

Very sorry to see this. Too many guys going down lately. All the best Marco and I know we will see you on your feet soon.

Get well soon - wishing you a speedy recovery.

Very glad to see you will be OK. Scary stuff there bro. I lowsided my LT in some gravel once and if it wasn't for the tip-over bars, that beastie would have taken off half my leg. Hope the pretty nurses are giving you some hefty doses of opiates :smile1: while you heal up. Get better and back on the road soon.
C

Get well soon Marco.
I have a fair idea how you're feeling at the moment having been in a similar situation (broken ribs) in Pai hospital back in February.
As CDRW has mentioned, I don't envy you the ride home in the car.

Best wishes for a speedy and full recovery.

Take it easy Marco, and get well soon mate.

Bumped into Marco and Harry last Sunday in Nan and had a few beers with them. They really looked forward to the Khon Kaen bike happening as they are always game for some fun with fellow bike-riders. Anyway, hope you recover soon and that you will have many more happy kilometers on the road again with the Bus.

All you guys out there riding.....despite what we may sometimes feel when riding our bikes we are all only MORTAL beings. Please take care.

It can & does hurt when you go down - physically & financially. Your immediate family & closest friends will also feel the pain.

Sorry to hear about your accident Marco, on the way TO the party as well. You have a big advantage having a wife in the "trade" so I am sure she will see to it that you are soon back on your bike.
Get well soon.Cheers,
Peter

Hope all your injuries resolve themselves, Get well soon!
R

Sorry to hear thins Marco was always one to stop by when he was in Udon. Just good people. Looks like your going down a tough road for a bit. Let Poi and I know if we can help.

Happily better news to report by the end of the day on my second visit.. Now in the third hospital in 3 days, (Marco is not an easy patient to look after, let alone for slim Thai nurses to lift and turn over in bed) Srinakarin the University Teaching Hospital, and I kid you not they have asked if they can make him a study case for the students---Marco’s response “How much will they pay me”.
First a look at a very crowded garage, Not really room for the Panzer Wagon, but a D-Tracker will shortly be delivered to Ian, and please someone make more room by buying the FZ1 (Oh dear wrong thread for sales pitch)

So this morning Marco was really feeling sorry for himself and was not what you would describe as a model patient, when asked to turn over this was the response (the finger tells the story) 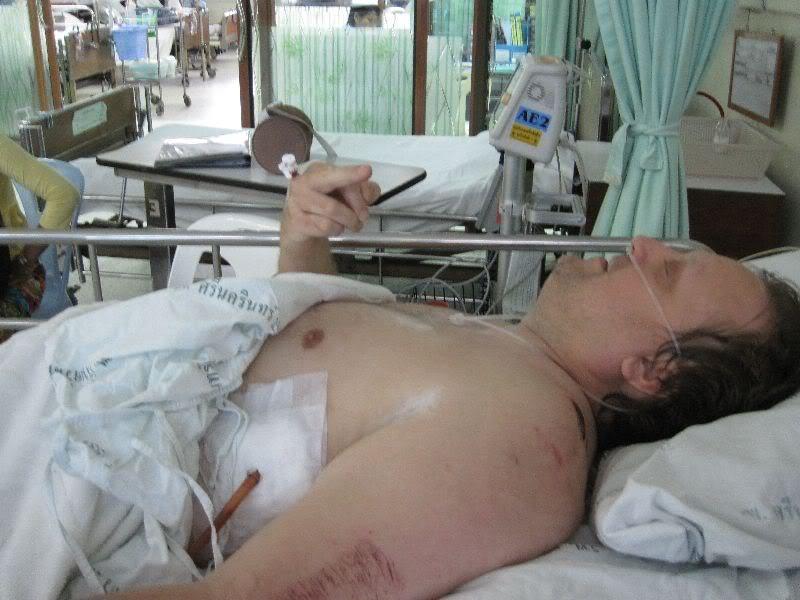 The tube coming out of his chest is because they needed some blood for his case study, and other needy patients, but Marco refused, so they stuck the tube in and helped themselves. Actually not much use to him anyway because it was somewhere in the chest cavity not in the blood vessels,
Marco is actually very lucky as he is in an airconditioned private room, very peaceful, but much more importantly, his wife Khun Bee is medically trained, actually studied at this hospital, has relatives working in the hospital, who were at Marco’s bedside very quickly even when first checked into the not so good government hospital.
Khun Bee, show in the picture with one of the many nurses who want to see this large case study. 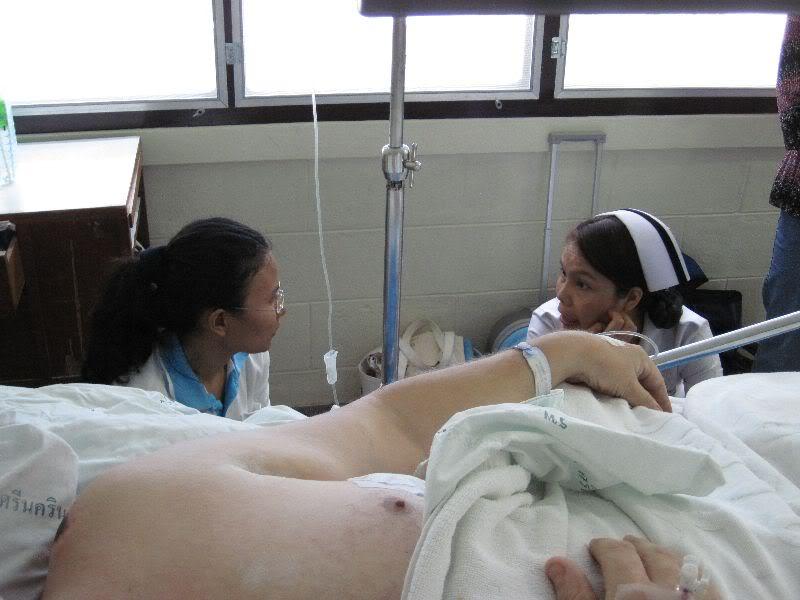 These nurses spend long times in conversation with her and are asking her advice on pharmaceutical matters.

Members of the family who drove over from Ubon today to see Marco, and amazingly they did not even pose and smile when I got the camera out, too interested in Marco’s condition. He explained that to them in Finnish, which was about as clear to everybody as if he had done it in Thai.

Sort of do it yourself here. The nurses had left a stethoscope hanging up, so Marco asked Bee, (wife) if she could listen to see if he had all four cylinders still working.

Now even more nurses turn up to take advice from Khun Bee and beg to hold the hand of the Panzer Wagon Driver (ex if Khun Bee has her way), but we all know Marco!!
Now the thumb changes orientation, and things are looking up on all fronts.

That was this am, this evening I went back on behalf of Khon Kaen Rider, and gave Khun Bee the lovely flower display they had made and some presentation T shirts from the bike week.
Marco had eaten some food, the first since the accident and I knew my visit would not be too long because the bed pan was ready for the expected flushing effect of the food.
Marco is not using his computer, so will not be able to respond yet to your kind thoughts, but I printed out the thread and read your comments to him which he appreciated very much, although I did hear the odd muttered comments which sounded something like “cheeky barstool”, or “bus, my foot”.
Things are on the up and when they finish helping themselves to Finnish blood and various other important samples for the case study, from inside Marco, and take out the tube, when he has some motions, (does that mean he can move about more??) and is not in too much pain, he will go home probably in his car with the seat reclined, because as Marco said “ The ambulances are built for short slim Thai people and the ride is Bl****Y F********G Uncomfortable”
I obviously was brought up completely wrong with respect to politeness, cooperation etc, because by being downright awkward, uncooperative and sometimes a teeny bit, (no quite a lot actually)rude, Marco is getting amazing treatment and attention, much better than us quiet guys.
So the path is well on the upward trend and thank God for that, or Bhudda, or Khun Bee, or whoever you think appropriate........
R

Remind me to call Khun Bee on my next accident LOL :happy1:

Sorry to hear that, Marco.
Hope you get back on the road soon...

Thanks John for the update.
S

We wish you a speedy recovery Marco. Hope that you heel quickly. Thanks John for keeping us updated .
Gary & Well

Very sad at learning your acident, take it easy, relax and best wishes for a prompt recovery. Don't let down the BMW communauty and courage Mate !

I know that it's all our phantasms to stay over the night with pretty nurses in the hospital but sun is better outside.

Keep on the Power and be with us soon !