Had a look inside Linda guesthouse on arrival in Oudom Xai, this place must be the worst guesthouse on the planet. And as dirty and smelly as this fire death trap was, it was only marginally worse than two others I looked at in town. I finally found the Oudonkhan hotel after a fair bit of riding around, and since it was getting late decided to keep my mouth shut and refrained commenting on receptionist’s attitude to doing what he was getting paid for.
The Oudonkhan Hotel is about 1km out of town on the right, on the road heading to Pak Beng. Big place, you cant miss it.

The best and the worst of Oudom Xai.

Off to Muang Khua.

The first 30km out of town is great (hwy 2E), hardly a straight bit of road and the tar surface in pretty good nic.
After that its not to bad either but the road and river seem intent on becoming one.

Now this is what you call a big pot hole.

The hole had obviously been cleaned out, but behind me you could see were the water had come rushing down the mountain and taken out the road 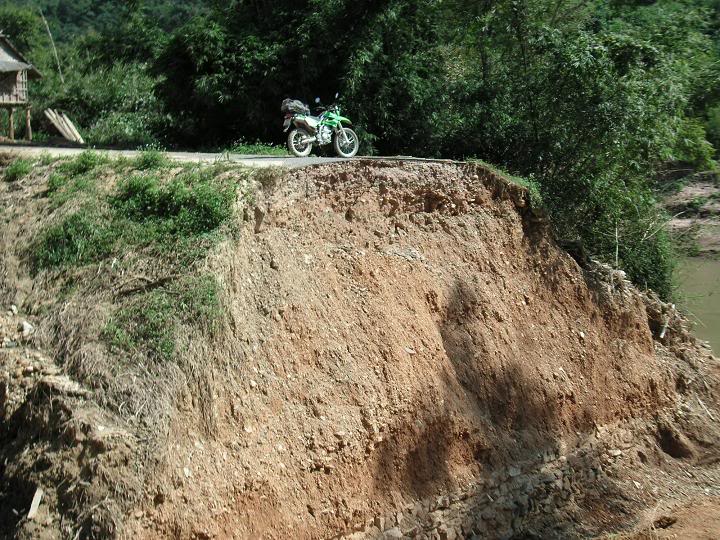 You can just make out my bike on the left, it shows just how far across it is.
In my younger days I mite have given it a shot. Arrrr maybe not.

Here’s another angle, the shade from the tree hides the canyon beautifully.
And note there’s no signs at all to warn you, just a mound of dirt of the other side of the hole.
Imagine the poor Lao guy that’s driving home at 1am from an intense night of karaoke, he’s pick up having a hard enough time staying to road as it is,
then all of a sudden airborne like the Dukes of Hazard.

Arrived in Muang Khua without being swallowed up by the road.

Muang Khua…..is a small town with a big thrust. 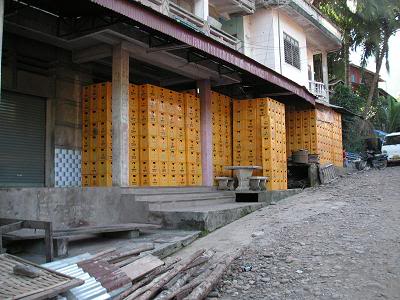 Muang Khua is a good little town to roam around. Its perched on hills both sides of a river, and joined by a suspension bridge.

There’s a car ferry that crossers the Nam Ou river. This is the road that takes you to the Vietnamese border at Taichang, which is now open to tourists, but not there bikes.
Borders about 50km’s away.
The blue boats go north to Phongsali and south to Nong Khiaw. Could go further south to Luang Prabang, but Im not sure.
So with the opening of the border, and all the backpackers from the ferrys. Muang Khua is doing pretty well I think.

The road to Vietnam. 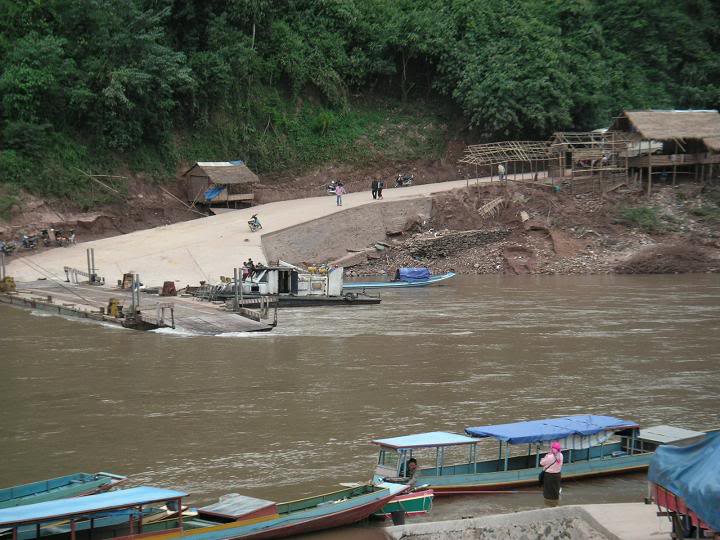 Stayed at here at the Chaluensoak Guest House, great place, brand new, bike locked away at night, and 200 metres to the river. 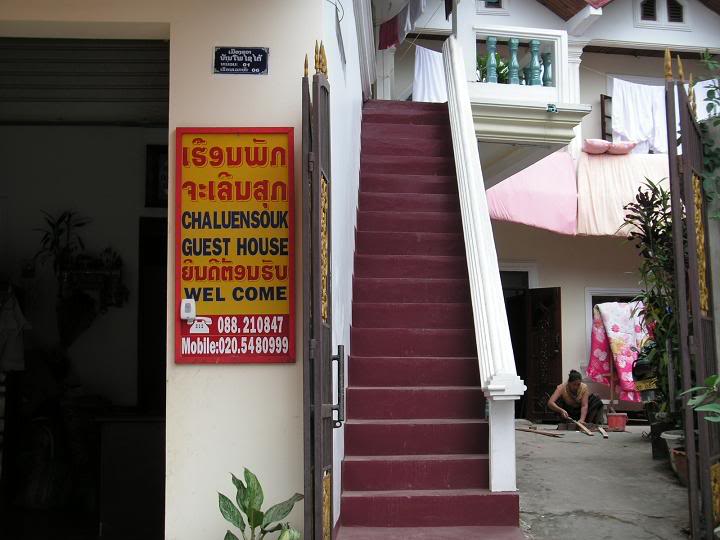 Good food with a view, only three doors down.

Next day headed to Luang Prabang. Twenty km’s out from Muang Khua got a flat.

No fixing this one for a spare.

Everything was going fine till it came pumping up the tyre with the new tube in it.
The brand new BETO pump I brought before leaving had one major problem…it didn’t pump air. So luckily a lao guy stopped and rode 3 km’s to the next village and came back with a pump…thankfully not a BETO, we swapped air for kip, both happy with the deal, and I was on my way again.

Spotted this sticker on the back on a government ute.

Thanks for writing the trip up. Excellent stuff. Pity about that awesome tarmac being eaten away a bit, that road is great.

Your meaty puncture made me laugh. Almost a carbon copy of one my mate had while we were in Laos...

Hmm Rexy Boy, that must have been a Moment and i'm sure you had a flash back there to 1993 at a place outside of Innamincka S.A. on a KLR650 Tengai'

Looks like you are doing some good adventure riding there mate.

Gday there hoony.
And welcome to the board mate. Yes, that was a big “get off” I had that day out there in the desert. Expensive trip that one.
Ive been doing a few trips here, it’s a great part of the world to go riding.
I hear your a TV motorcyclist celebrity now…..the make up artist’s would have there work cut out on you. :lol:
Good to here from ya.
Rex 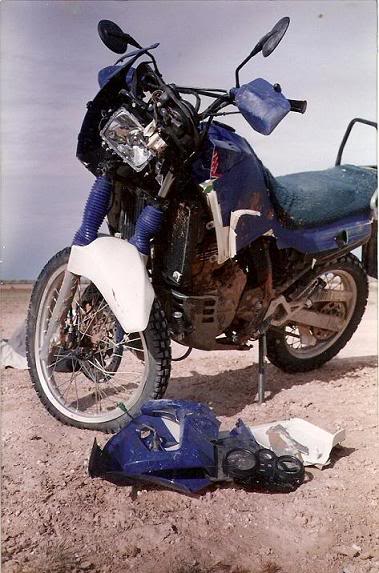 Moto-Rex
Yep that sure was one hell of a flood they had out there around Oudom Xai wasn't it!

I used to stay at the Linda guesthouse in Oudom Xai years ago when it first opened, it was sweet & clean, with a Thai connection. However like many good things it slowly but surely ran down over the years with neglect & eventually I gave up on the place because of the disturbing night time noises & scruffiness.
I'm glad you found the Oudom Kham hotel then, because it is a great value for money in OX, although just a bit out of town, but well worth it when you've got your own bike 'n transport.

That nail in the tyre was a beauty alright.
In Laos you really need to do watch where you’re riding through all the villages, because there is a lot of Mickey Mouse construction going on & the villagers just seem to leave / throw the refuse everywhere - including nails.
I wonder what you're real words were as you frantically pumped away on your new pump realizing you weren't going anywhere? Did you take the pump back to the shop in Cnx, politely complain & get your money back?

The Kwacka crash was a ripper - luck to survive some would say?
What was the broken bone score?

Davidfl wrote: I gave up on the place because of the disturbing night time noises & scruffiness
Click to expand...

.
Mmmm....... I hope there wasnt any "disturbing noises" comming from your room. :shock:

I'm glad you found the Oudom Kham hotel then, because it is a great value for money in OX, although just a bit out of town, but well worth it when you've got your own bike 'n transport.
Click to expand...

Your right there, its a good place to stay. There was a couple of other places that looked OK, but had no were to put your bike.

That nail in the tyre was a beauty alright.
Click to expand...

The nail was in all the way. I pulled it out for the photo. What gets me is how its gone right through the knob.

I wonder what you're real words were as you frantically pumped away on your new pump realizing you weren't going anywhere? Did you take the pump back to the shop in Cnx, politely complain & get your money back?
Click to expand...

Ill just cut the loss. I can do without the drama of taking it back.

The Kwacka crash was a ripper - luck to survive some would say?
What was the broken bone score?
Click to expand...

I was a very lucky fella that day. I only twisted my ankle a bit, but the 2 week old Kawasaki was a right off.