In the years 1989 to 1996, before I bought my own stuff, I enjoyed the company of rented motorcycles in various places around Thailand. I remember “two wheel chicks” from Pataya, Phuket, Chiangmai, Koh Samui, Mae Hong Song, Hua Hin and Korat. It was not yet "digital age" and I wasted only a couple of slides to record some of the ladies. Looking at my faded picture from that period, I wonder how many of my friends still blunder around Siam. Time has covered the years with the haze of nostalgia. My mind has difficulties to revive precise instants but my heart remembers enjoyable moments of happiness and freedom, spent in the company of these bikes.

Most of the shops were probably called "Big Bikes" and for me the vehicles were great, despite their heavy rental duties. During the years spent with my "temporary companions", I had only minor incidents. One broken chain, in front of a mechanic shop in Rayong, another one on the road between Surat Thani and Phuket and a flat tire on the highway before Cha Am. I was probably very lucky and other riders might have different stories to share.

I just remember one amusing anecdote. It happened in Phuket, where I had rented a standard "bar hopping" bike, a Honda MTX 125. At that time there were plenty of them, all dressed in yellow. I parked mine in Patong's night life's district, with a freshly filled tank and enjoyed a couple of happy hours! Much later, that evening, whilst driving back to my hotel, the MTX coughed and stopped! She was as dry as my throat and I begun to swear (wrongly as it came out later) against Thai hooligans who had stolen my fuel. The night was no longer young and I had to circle the city by "tuck tuck" to source a bottle of petrol before plunging into Morpheus's bed.

Later that morning, whilst driving around the island I felt that my bike reacted in a strange way and, in particular, that she did not break well! These were only small annoyances on the lovely roads circling Phuket island. I brought the motorcycle back in time to the rental shop ... to hear the owner telling me that it was not theirs! I had no time to wonder, a young Farang jumped out of nowhere, shouting "my bike! my bike!". He put his key inside and disappeared without any comment ... too happy to get his girlfriend back.

I walked straight to the bars and found my own chick, exactly where I had left her. Not only did all the colors of the MTX match at that time ... most of the keys also did.

Years later I still remember my old mates. They were “Fair Ladies”, but despite some lifting and make up, none had ever won a beauty contest. Gentle and docile, accepting their fate, they were used and abused, with very few maintenance. You would often meet them parked here and there, at the corner of a bar, waiting for a casual owner to take them home. 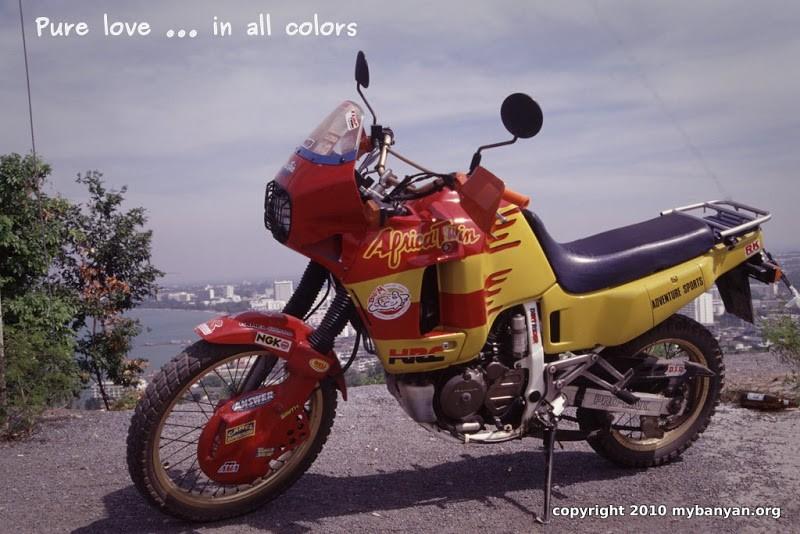 Freedom is what you got during these years in the “Land of the Frees”. Few questions were asked and no license required. You just left a passport to make sure that you would be accountable if you harmed your dooly. People mostly went out “uncovered” despite the known hazards, but safety was not yet a national priority.

Nostalgia probably means only remembering the good things from the past. When I watch the old pictures I see the smiles but I am not longing for what is gone, long time ago. Instead, I just go out for a ride with my new companions of the digital age. However, because we shared such enjoyable moments, I wanted to pay them a tribute. Other readers have probably met them or might still be going out in their company. 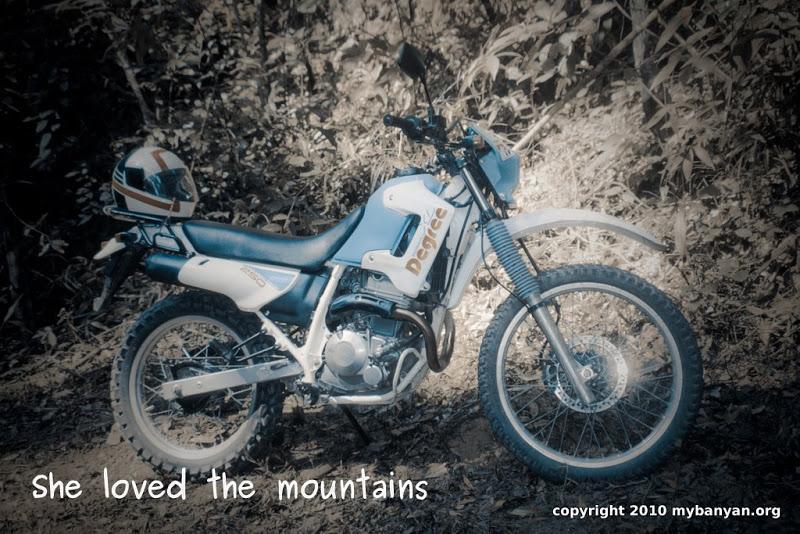 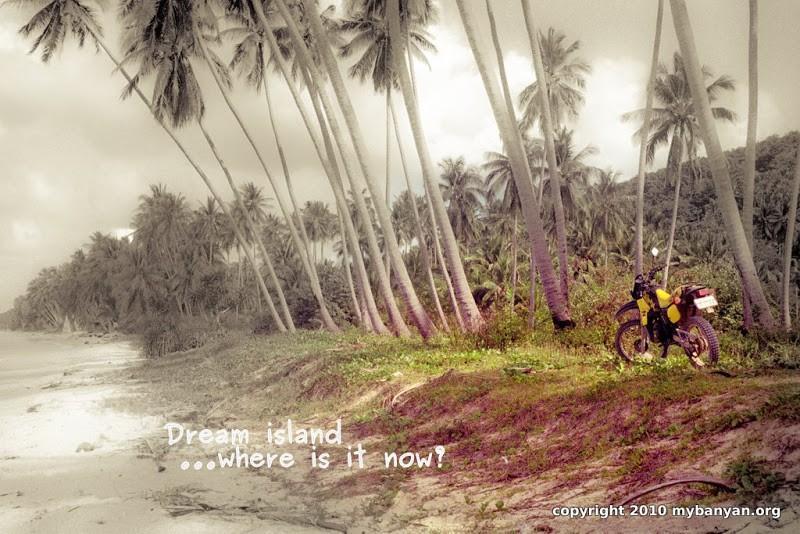 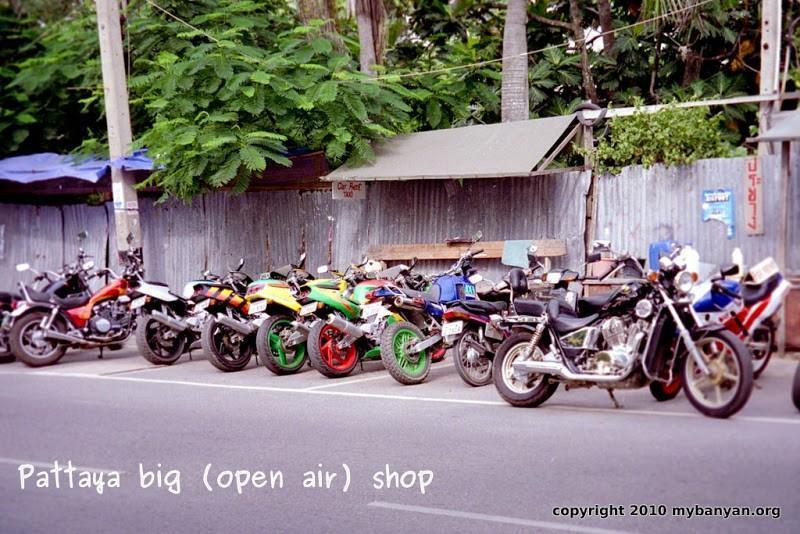 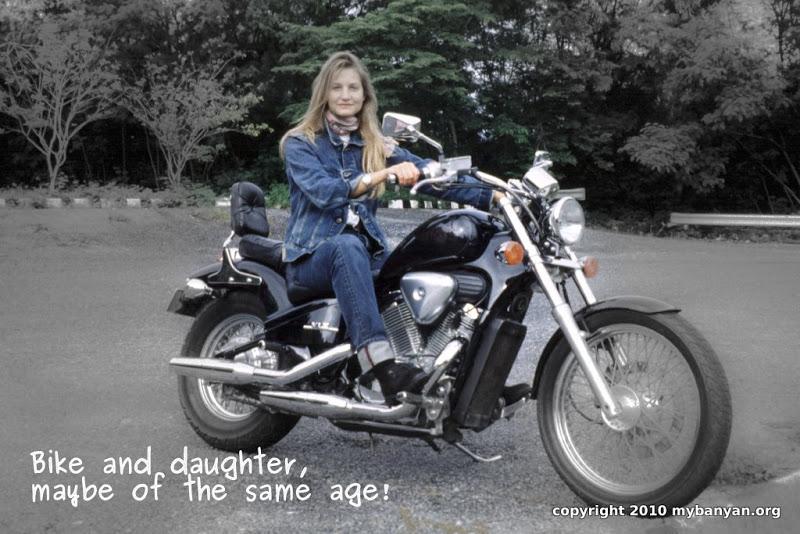 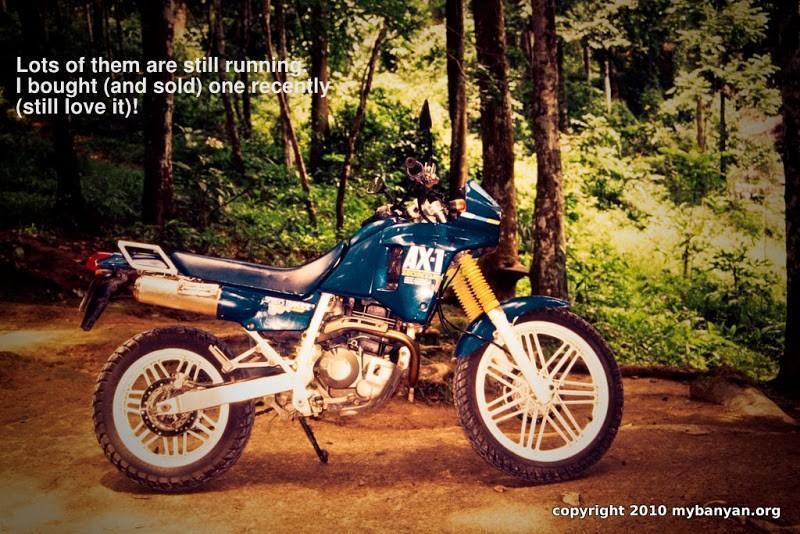 Jurgen, many many thanks for sharing these memories of old bikes !!!! Must say you got an astonishing collection of bikes you used. Amazing also that you even took the time to take a foto of each and everyone and still remember the location !!! As for the MHS MTX'ses, well I used the same shop with Jid as the owner (or by that time his wealthy parents), think I had the P8 several times on long time rent and loved to do MHS-PAI-CNX; such an able bike and powerfull it was too. Another of your bikes I loved is the old trusty AX1, I think Dang rental bikes near Taphae gate still only has exclusively AX1's for rent, Joe used an AX1 to go with DavidFL, Dave-Silverhawk and Armin to VN and according to the report enjoyed it much more than the others.... :smile1:
Funny that you filled up a bike for a stranger and he didn't even thank you or pay you a Singha.....55555555
Cheers, Franz

I don't know which looks funnier, some of the paint jobs or these pants.

As it was about 20 years ago, I do not remember if the pants were fashion at that time :huh: :huh: ... or if I got them second hand :smile1:

For Franz ... since ever I always had a camera on my shoulder and shot thousand of slides who ended in the hardware trash bin. I saved some and during this Summer in Switzerland I scanned some of the stuff. My memories are really not so precise, on some slides you can read the location and for others it is an easy guess !

You are right, Daeng still has AX1, I bought one last November, went around the North and Isan with it and (stupidly) sold it! I still love these bikes but would prefer another Transalp 400! It's just what I missed for a North Laos tour ... but my ERn behaved quite well on the chosen itinerary.

Great Stuff Mate, And Great Memories!!! I was involved with Boy & Alan of the Patong Big Bike shop back in 1991 when I had the First Bungy Jump on the Beach there. Because of this I spent quite a lot of My Free Time at the Shop and had a Fair selection of Bikes to Ride, Great Fun. Times have really changed and all those Beach resorts are no longer the relatively quiet Fun packed Places they used to be but "Such is Life", That's Why We are living here now!!!
F

wouahh! Makes me dream ... I have to consider how much space is left under my roof! Thanks for the hint.

Thanks for taking the time to post all these photos up and add the naration...

I would have loved to have been riding around back in those days, but at 5 years old, probably was still falling off my pushbike with great regularity .

What a massive selection of bikes...

I am not a mechanic and know only a little of the new burden to register motorcycles, but technical and legal aspects probably make it impossible for rental shops to offer a large choice of bikes. In the past nobody cared and most where deep in the grey zone! Nowadays, any unregistered bike might be taken straight to police store room.

Jurgen
Fantastic photos & memories. Could it be that you've ridden & toured on more different bikes in Thailand than anyone on GT Rider?
:happy3:

No great merit David, these were only short time loves  ! At that time I had no own harbour and worked out of hotels rooms. I kept my helmet in one storeroom and boots in another, sometimes forgetting were I left them. Once I was more settled down, life also changed. I did like Ian, abandoned crowded beaches and took roots in the wonderful North. I do not regret it, but still remember these friendly girls  !

I am sure that many other GTR readers have met them and enjoyed their company.

Wow- what a fantastic thread and great pics! I'm impressed at your organizational skills too! Happy Trails! Tony