Ride And Camp To Pos Titom

Pos Titom is situated 55km west of the nearest township of Betau, 15 minutes on Federal Road E102 from Sungai Koyan to Ringlet in Cameron Highland. The road leading to Pos Titom is a cement surfaced road officially initiated in 2014 that connect to a tight, bush cladded, beaten up tarmac-surfaced and dirt road from Pos Betau.

It connects 5 Orang Asli villages (KOA) which are KOA Chincin, KOA Jernang, KOA Sungai Sempat & KOA Titom that has about 700 people mostly from Semai ethnic. Most villages nestled by the riverbank of Sungai Jelai Kecil with elevation above 800m from sea level has a mild high altitude tropical weather with temperature ranging from 30°C to 10°C and 80% relative humidity.

The ride plan is to ride to Pos Betau through Karak, Bentong, Sungai Koyan and camp at a site about 1km from Pos Titom. This is my first ride after more than two months of break during Ramadan & Syawal. During this break, reading and watching ride reports from my ride colleagues honestly is really painful and I am so relieved to back on the bike. Joining me were Ijal, Abang Jani, Ivan, Ali, Zaidi, Ibrahim, Haza, Rein, Zam & Uncle. At least four of these bikers will ride out on the same day and the rest are camping at Pos Titom.

Ijal who was riding on 1986 Honda C70, departed from Puchong around 4am and waited for the rest of us at Petron Sungai Koyan. Abang Jani, Ivan, Zaidi, Ali & me met up at BHPetrol Lebuhraya Karak around 8am and we departed soon after. The temperature that Saturday morning is around 26°C and the weather was clear. Traffic on Karak Highway is normal and smooth heading to Karak toll and we ride smoothly to Bentong.

We arrived at Petron Sungai Koyan around 10.00am and RS3 riders (Haza, Rein, Uncle & Zam) with Ijal has already arrived earlier. Ibrahim who was riding from Bertam, Penang alone and he hasn’t arrived yet when we departed around 10.35am. At this point, I have concluded that Ibrahim was unable to join us.

When we arrived at Pos Betau rest area to have lunch, RS3 riders were separated from us and they went straight to Pos Lenjang. We departed around 11.20am and it was scouring hot and humid when we entered the road leading to Pos Lenjang. 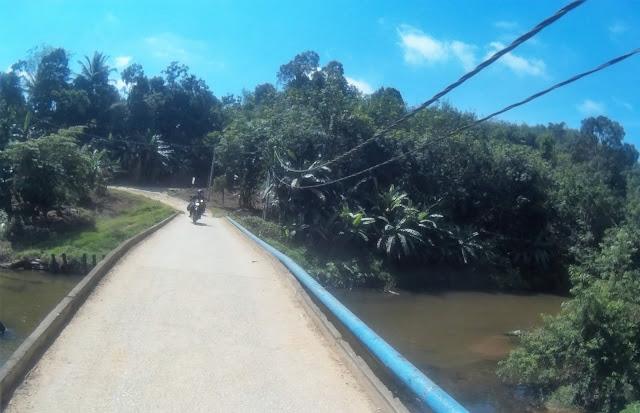 The GPS signal wasn’t so clear and I led the team into a few wrong junctions. It took a while, after a few stops and asking direction from the villagers and we were finally on the correct path. 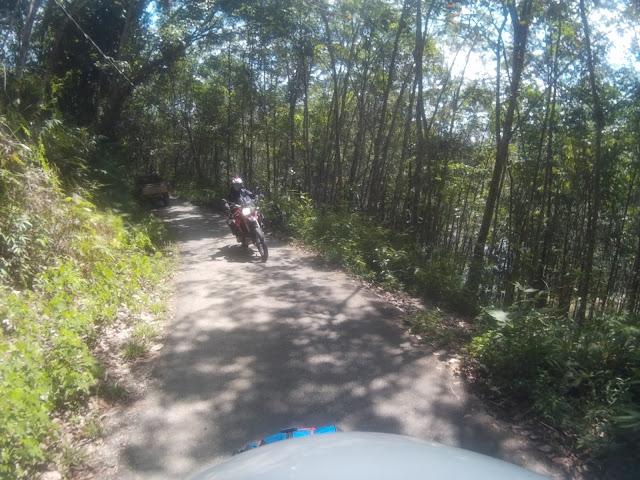 Halfway through the route we met all RS3 riders. They suffered a few falls and the morale was very low. We took a rest on the road for a few minutes. The more experienced riders were soon ahead and I stayed with Uncle and Rein. 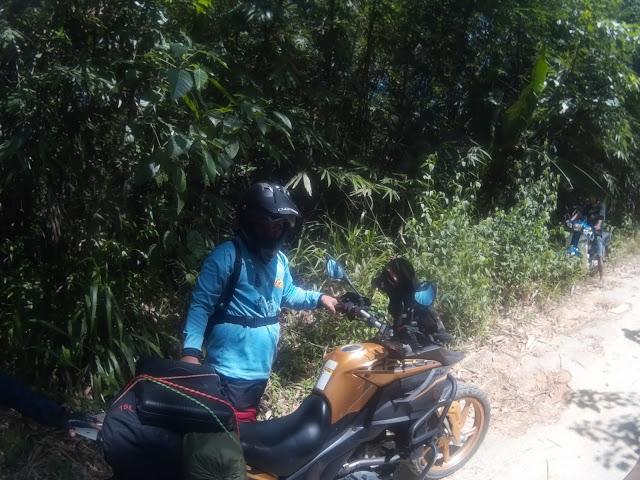 Ivan giving his tips on offroad-ing

The road were very small, with a lot of uneven holes and overgrown canopy of trees.

Despite the absence of rain and hot weather, there are at least 4 mud poles and it was a lot of fun passing through them!

Around 1am and 5km from the Lenjang – Titom junction, we were regrouped again and rested under a big tree. A few local children joined us.

I shared my kitkat with them and they were very happy. After a much need rest and replenished energy, we continued and finally arrived at Pos Titom around 2.45pm.

We went to meet Tok Batin Ramli to distribute used clothes that I brought in and asked for permission to camp. The noon was hot and the weather is around 28°C 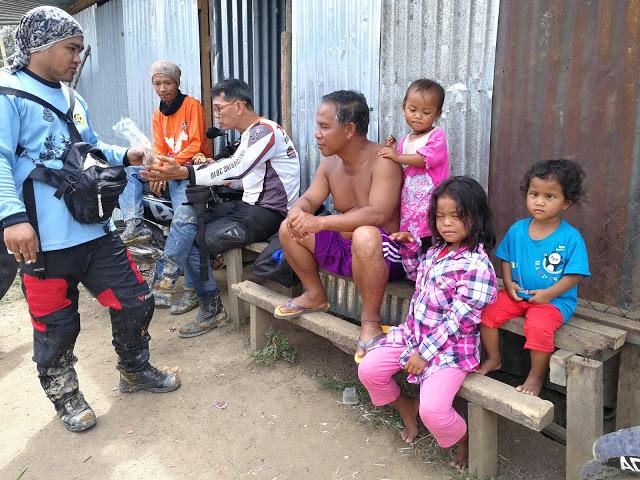 There is a school at this village powered by hybrid solar energy and the villagers are relying on solar energy for the power supply.

The campsite is an opening on the riverbank of Sungai Ineik, with steady stream of crystal clear & cool water flowing from Ulu Jelai mountain ranges.

The road leading to Pos Titom crosses Sungai Ineik on a nice flat concrete block and flowing river water on top. Abang Jani, Ivan, Zaidi & Ali departed soon after they finish cooling down in the water and we began setting up camp. 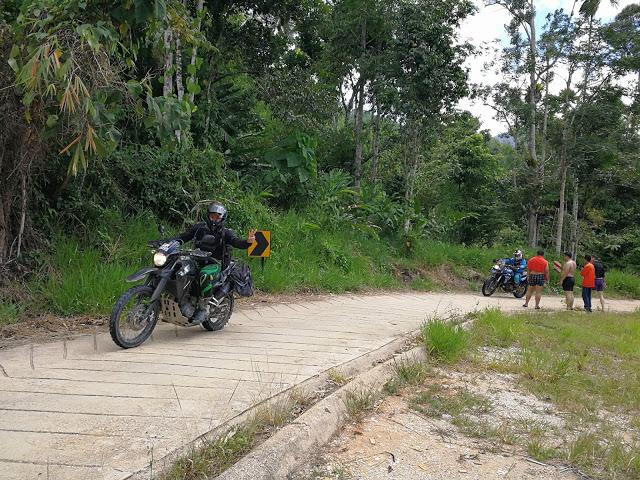 Around 4.30pm, our camp were shocked when Ibrahim arrived with a villager. He said he got a problem back home and unable to depart earlier. He arrived at Pos Betau waypoint around 2pm and began riding alone until he found a local man on a cub, whom agreed to lead him here. We were relieved that he has arrived safely despite this is his first offroad ride.. Kudos Cikgu Ibrahim!

the river was very cold & refreshing

a local man with his new bike 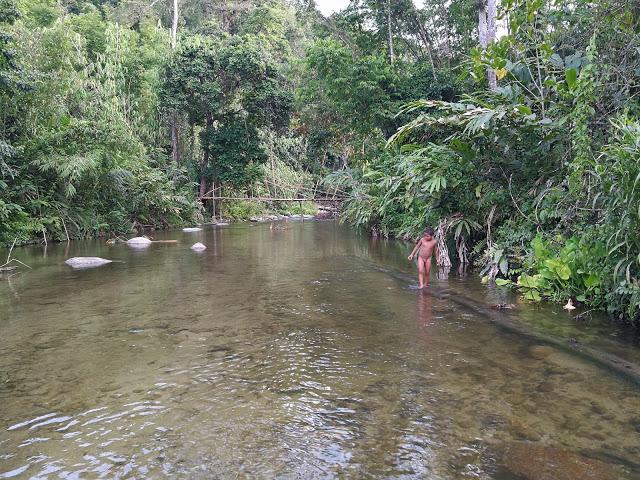 We aren't the only one excited by the river

a tiger in its habitat 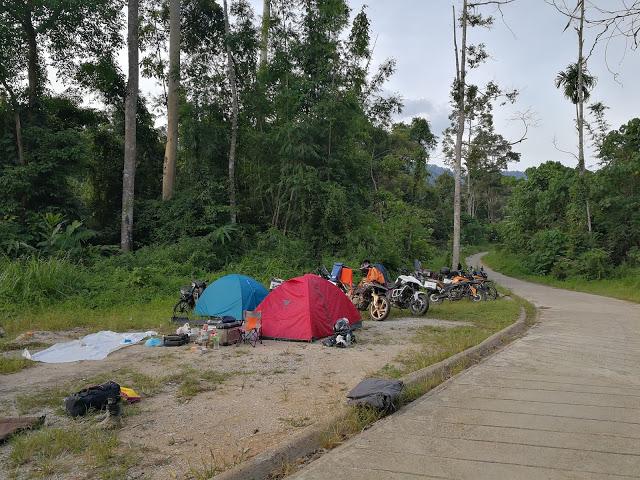 I began cooking oxtail curry and white rice around 5pm and the temperature began to drop. This is my first time preparing curry in a jungle, as we normally brought canned food for dinner. Thank you Abang Jani for bringing Ayam Pansuh for us.

After sunset, we began chatting and eating by a fire pit under the clear night sky.

Rein shared his work experience testing radio with the navy on the sea. Around 9.30pm, Haza prepared coffee and uncle begin to prepare his sleeping bag. I retrieved to my tent around 10.30pm and it was a very cold night. From the initial four guys sleeping under the stars, uncle was the only man sleeping outside through the night.

The temperature continues to drop and it was 12.3C when I checked around 6.05am.

The next day we prepared our own breakfast and I have instant noodle with coffee. We began clearing our campsite and everything were packed around 9.30am. I took Ibrahim to the village school for pictures and regrouped with the rest soon after.

We made a move around 10.00am. On the way out, we stopped by a suspension bridge for photo session. 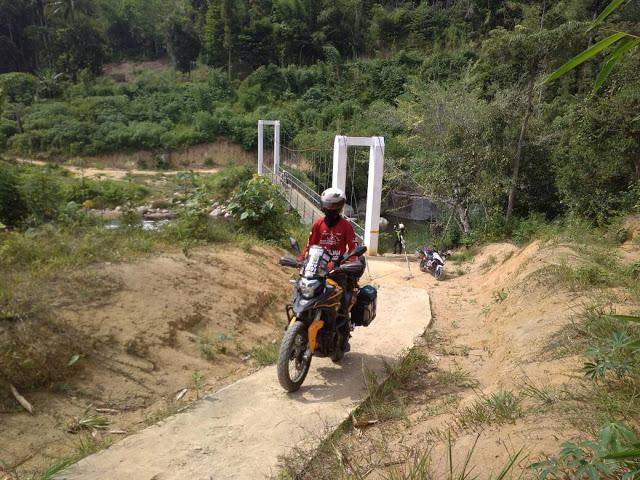 It was 11.00am when we arrived at the raft river crossing junction. Ijal’s was the first to cross the river on a raft maneuvered by 3 local boys. 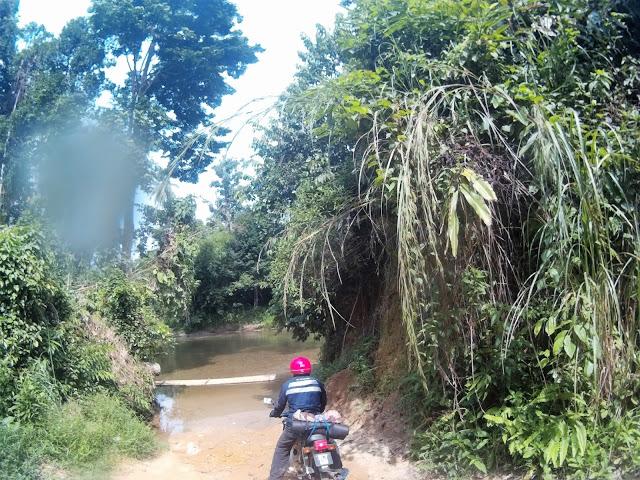 All of us followed soon after and it was a really great experience.

The road after the crossing was a different road from yesterday and it was 10km of logging road with red soil base and compacted rock.

We were fortunate that it didn’t rain that day as there are a lot of steep sections that will be difficult to pass if it was wet. Only one mud pole area on this road and on dry condition, it was easier than yesterday’s. 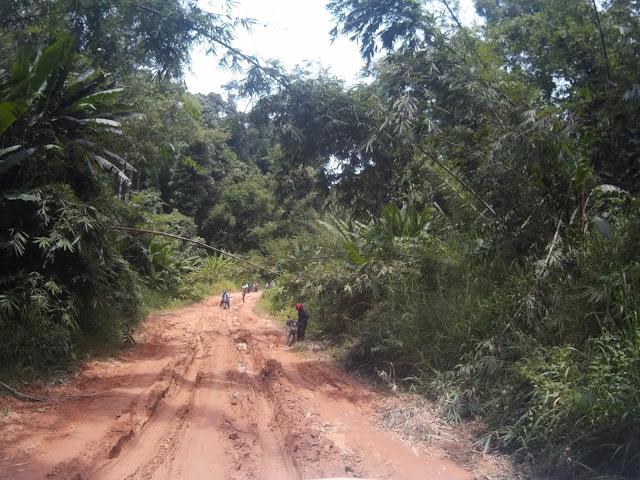 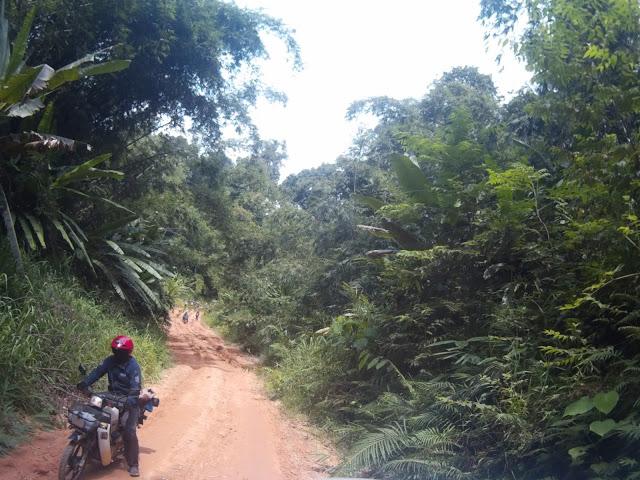 We arrived at the waypoint around 1.30pm and everyone was very happy to complete the offroad sections!

We headed to Shell Ringlet to refill petrol and tire pressure and to Brinchang food court for lunch. The temperature at Tanah Rata was 24°C and the weather is cloudy. I said my goodbye here and head back to Rawang through Tapah and North South expressway. I made another stop at Behrang and arrived home around 6.00pm.

It feels great to be back riding after a short break and a good company to ride and camp is an added bonus. I hope that the jungle surrounding place will be preserved and the river will still be crystal clear for years to come. With the fast diminishing forest reserve in Peninsular Malaysia, I can only wish that I will be back at the same area after 5 years and still be amazed by the fresh atmosphere and lovely people that I met during this trip.

I love these three pics

and these wheels intrigue me

are they standard or..?

This the first time I rode with these KTNS RS3 riders. The bike has two versions, the alloy rims are standard for their "SE" range
Welcome to KTNS - Product

mohdrashidin said:
This the first time I rode with these KTNS RS3 riders. The bike has two versions, the alloy rims are standard for their "SE" range
Welcome to KTNS - Product
Click to expand...

I'd never heard of them.

Fantastic Guys.
I reckon cooking your own food at camp, is better than tinned and packet stuff. More satisfying and not that difficult at all.....!
Love the raft trip.....