G'Day guys, does anyone have a recent update on this road? When I was last in Laos in 2016 and attempted this route it was cut off due to flooding. Road was dirt only. There was talk of it being tarred. Any recent news appreciated. Cheers.

Replying to an old post but may be useful to others, as I was searching the same info recently. I was touring in that area the last few weeks, although in my truck not bike as I had the family along. The Road 23 from Saravan to Phin is still a dirt road, but perfectly passable other than the river crossing by the bombed bridge about half way at Tat Hai. This river can easily be forded in the dry season but not in the wet. Other than that, there are a few small temporary, seasonal streams across the road here and there but nothing serious. The road can be slippy especially on the Phin side of the river, and the Phin side has some new wet season growth from trees either side that could do with pruning, but nothing dangerous. It is mostly used by illegal loggers using the small “toktok” tractors, and the police for collecting their commission from them. There are a few villages along the way that have stores for drinks & snacks.

Another, alternative route I did last week was on mostly sealed roads except for 45km. Just 2km west of Saravan you take the first right turn, up a sealed road signposted to Lalay border. After about 40km you get to a junction and turn right towards the border (left takes you back to the main Highway #13). Google earth has a lot of photos along this route.

You will get to a small town called Ta Oy, which has a few restaurants, mostly Khao Phiak noodles but a few also have fried rice or pad krapow. If you go through Ta Oy, about 1km past the town there is a left turn, with a sign for a guesthouse. This is where you leave the sealed road, and the next 30km or so are on a rough road that is being surveyed for sealing now. 15km out of Ta Oy you get to a river that is about 80m wide in the wet season and 1m deep at the deepest point. I forded it in a truck, but there is a cable-pulled ferry for motorbikes. This crossing is at 16deg 12’06.52” N, 106deg 39” 19.91” E and El.345 on Google earth. On the other side of the river there is another 30km of unsealed road, mostly smooth but with crevices from rain runoff, and a steep rocky road cut up and over a mountain – but people were doing it on Honda Waves. After this 30km you get to Nong, and from there to the Highway 9 junction it is a perfect new sealed road. You come out close to Sepon, 19km from the border – so about another 50km on the newly refurbished Highway 9 to Muang Phin.

Hi Andrew
Thanks for the update there mate - great to have you on board helping out with some info.
Do you have any photos or vdo of your trip out there that we could post.

Heres a few photos of the unsealed sections of the road.. 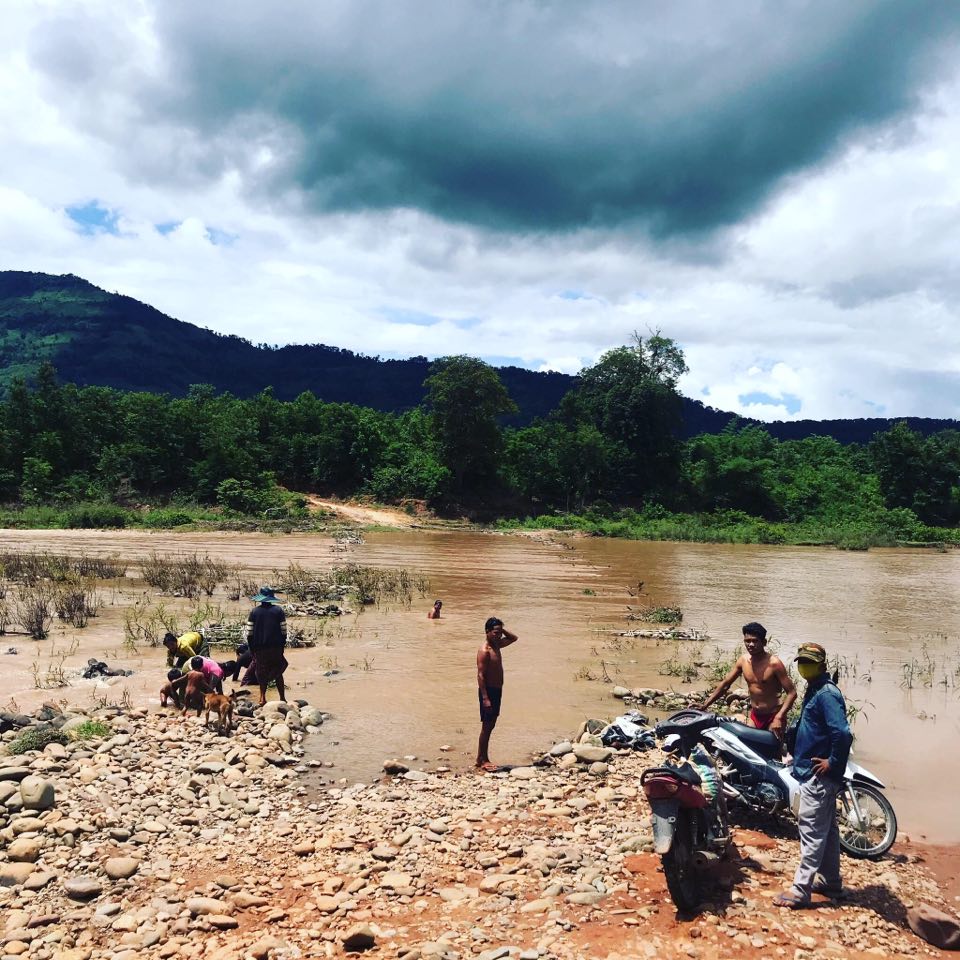