Trying yo recall the conversation last friday (28 May 2010) it went something along the lines of "I think I will go for a bike ride tomorrow" said I, "oh where we go?" came back the reply. "We?" said I but the moment was lost, "we can go and see the elephants and maybe the rafts around mae wang" came the reply.. oh well, give and take not very far but we can give it a go I thought after all I hadn't been there so why not. At least with a small ride there is no rush in the morning to set off, which is a good thing when both of us are going.
The route was simple, 1317 to the 121 and round to the 108. Take a left at thee 108 then turn right onto the 1013 and see what happens.
I was glad to get onto the 1013, the traffic on the 108 can be a bit manic and there always seem to be a lot of drivers who have zero regard for anyone else when I am in the area.
The 1013 is nice, after only a few km you are out in very nice country with lovely scenery.

And pretty soon you are amongst the elephant camps, there seemed to be lots of little elephants, perhaps they have nothing better to do

Shade in the Trees.

One thing there is a lack of at the moment though is water so the rafting areas were pretty deserted so the planned activity around there didnt happen so we just gently plodded onwards and upwards.
Past mae win you start climbing and the road surface deteriorates, the road has changes from sweeping bends to tight hairpin bends and steep inclines

I had looked at the route on the sat nav and seen that in theory it is possible to follow the 1013 to meet with the 1284 then the 1009 so was wondering about simply continuing but when we stopped at the view point it was clear that there were lots of very dark storm clouds in and around the mountain areas.

So we had a chat about out options and the fact that it was past time to eat (very very important where the Mrs is involved) we decidedd that we would do an about turn and look for a nice spot to eat. The view point was about 75km from home.
So about face it was down the steep and windy road which is great until you meet the truck coming up the other way across the whole of the road forcing a bit of a hairy avoiding movement, 500kg of bike and riders forced onto a sloping camber certainly sticks in the mind.
But soon enough it was back to the gentle 1013 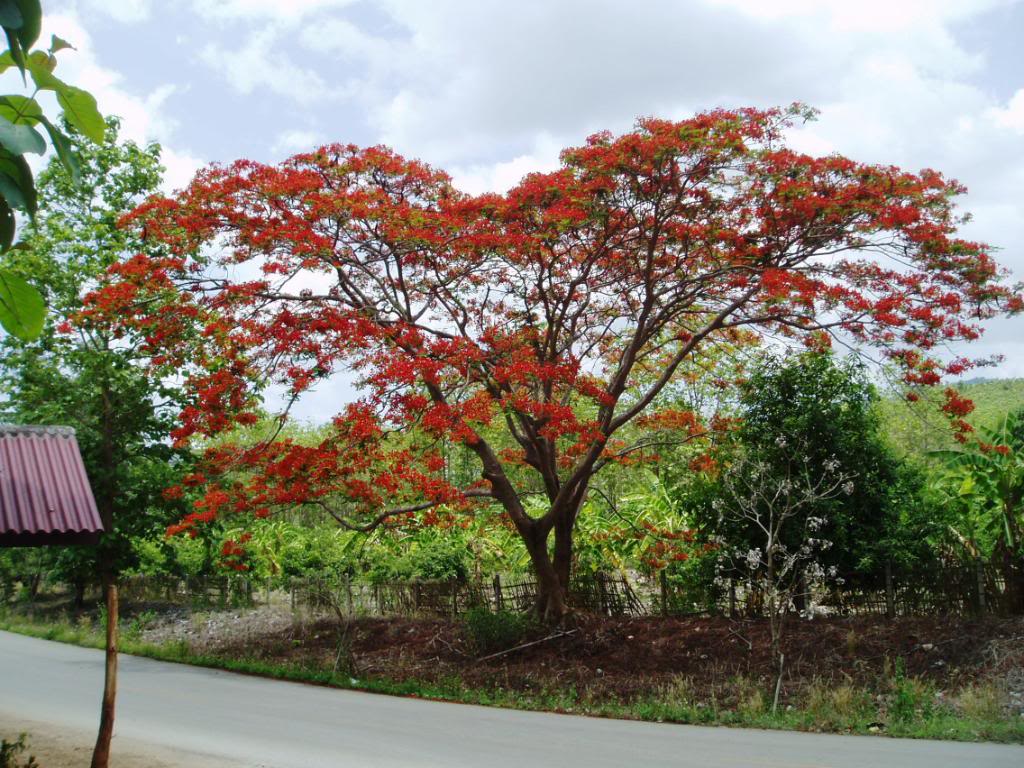 As soon as we were lower the weather seemed to change and it got warmer so we called into a shop for some liquid refreshment at ban kad. I had seen a sign for a Shrine to Japanese soldiers from WWII and I had also seen a dam and lake on the map so we enquired where they were. The shrine was about 800m up the road that we had turned left onto and the dam a further 6 to 8 km I think she said. Suitibly refreshed we set off to the shrine which is at a school.

(into the school grounds, take the left go to the end T junction, right and it is just down on the left)

Bike parked up near the shrine

Then off to the dam, if I didn't feed Pin soon there would be trouble :x 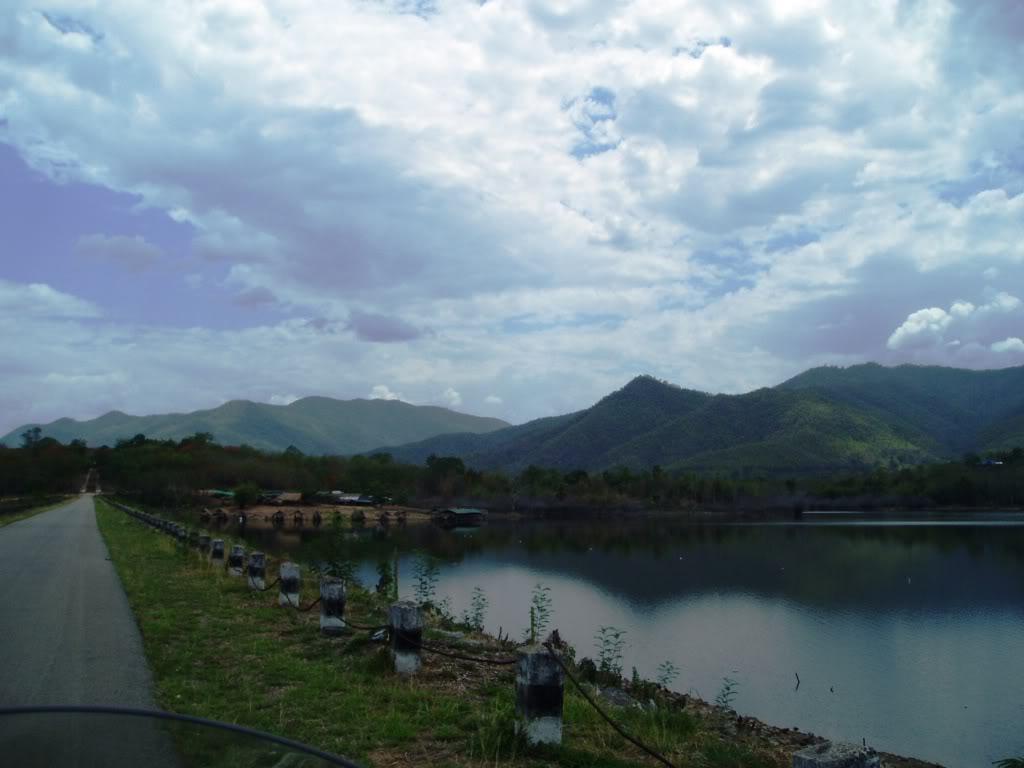 Opted for the floating restaurant 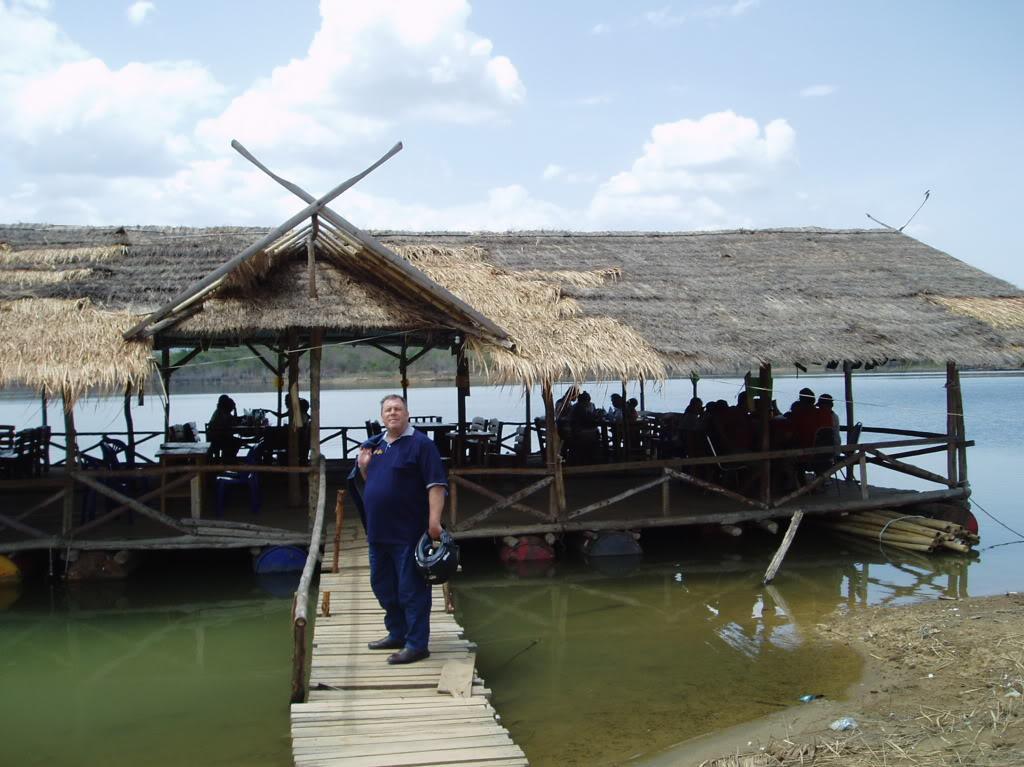 The food was tasty and plentyfull (oh and good value)

The views were nice

Once the meal was suitably consumed it was back home via the 108 but continuing until it hits the 1141 by the airport mall.

It was a really good short Saturday ride (about 170km all in all) and I give the restaurant a big plus. I also had never really thought of a Japanese shrine to their war dead, perhaps nievly, so that was quite an interesting learn for me.
I would like some input if anyone has continued on the 1013 past the view point to the 1284 and the 1009. Is it road or does it become track? Good for a big heavy bike or would you need something lighter?

Thanks for the comment, I had looked at the post about going to samoeng, it looks a little rough for the softail so I would be a little cautious about the bits that become a track. If I was to do it I don't think I would wan't anyone on the back and probably with someone that had done it before. What about the route I was thinking of which goes towards doi inthanon, have you done that?