I successfully took a bike into Vietnam 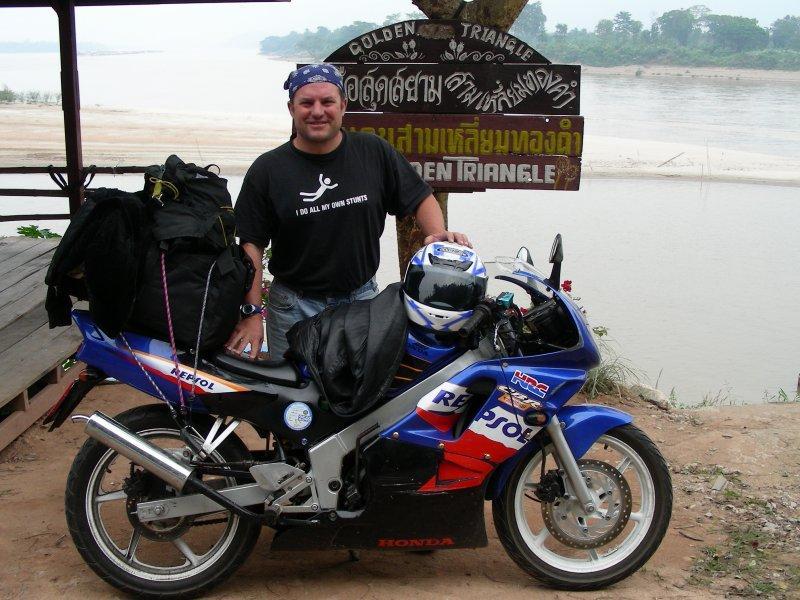 I was reminiscing a bit about my 'round the world trip in 2005-06 today, completed 10 years ago this week. Got back on this website (LOTS of changes David! Hope you are doing well), and realized that while I made some posts about certain segments, I never did a post summarizing my entire motorcycle odyssey in SE Asia. Thought this might help others considering doing something similar.

With not much planning, just a strong desire for adventure, I flew to Bangkok from Denver, CO, USA in Nov '05. On one of my first nights in the city, I met a gent who was finishing his trip in SE Asia. I asked him if he could do it all over again what would he do different. His response? Acquire a motorcycle somehow and do a loop of the countries I was considering. So.....

I spent some time trying to acquire a used one in BKK, but gave up after a few days and took an overnight bus to Chiang Mai. At a large bike swap just north of town, I purchased a used Honda NSR150 two stroke for about $500USD, odometer reading 18,300 km’s. Spent another 2 weeks touring northern Thailand before crossing over to Laos at Huay Xai.

Did a one day boat ride with the bike to Pak Beng, spent the night, then while the rest continued on the boat to Luang Prubang, I got there before them on the motorcycle, on New Year’s Eve. Next stop was Vang Vieng for a few days, then back north and northwest to Phonsovan/Plain of Jars, then on to the Vietnamese border crossing at Nam Xoi/Nam Meo. Would have stayed in Laos for longer, but that was all visa was good for. Loved the country and the friendliest natives I met in all of SE Asia. 2 weeks total.

What followed was the most frustrating part of the trip, successfully getting into Vietnam. I was led to believe that I was one of the first on this website to do so, but it took some work. Below, I have attached links to the posts I made on this website at the time, but in a nutshell:

I tried to pay an “extra fee”, but it is no use. The border guard (a very junior military officer, I even tried breaking out my old US military ID and explained I was a former naval aviator, to no avail) at Na Meo forced me to leave the bike at the border and travel to Thanh Hoa City, the provincial capital, to get a letter of permission from the police headquarters there. I got the letter (copy of it is at 2nd link below, I will also try to attach it here), but it took me three days total to get there, get passed around, finally get it, and return. The best part? Upon my return to the border/bike, the jackass border guard who denied me and forced that 3 day fiasco then asked if I wanted to “make a contribution to him and his men so that they could have a nice meal.” I was already on my bike, laughed hard, told him he’s supposed to ask me that BEFORE forcing me to jump through hoops, and headed off for Hanoi.

Spent some time in Hanoi, did a big loop out to the west, including Sapa and Bac Ha, back to Hanoi and then took a trip to Halong Bay. I then proceeded all the way down the coast, making stops at Da Nang, Hoi An, Hue, Nha Trang, among others, before getting to HCM City (Saigon). I crossed over to Cambodia at the Moc Bai border crossing, no problem, other than getting there late after being denied at the Xa Mat border crossing. They were supposed to have that border crossing fully operational a couple months after I was there, so you shouldn’t have a problem now. I spent a total of 5 weeks in Vietnam, renewing the visa once.

Phnom Penh, Cambodia was interesting to say the least. Felt a bit like I had travelled back in time to the old American west, anything seemed to go in that city. After a few days there, I travelled by bus with some new friends to Sihanoukville, and enjoyed some downtime on the beaches there. Got back to PP, and then headed off to Siem Riep/Angkor Wat. Was definitely nice to have the bike when checking out all the temples around Siem Riep, Angkor Wat just being one of them. A must see, but I have to disagree with the guide books that say you have to spend a minimum of 3 days there. I checked them out one evening, the entire next day, and I was done. To say the ride from Siem Riep to the Thai border at Poipet was a bit challenging would be the understatement of the year, hopefully it is somewhat improved by now. A good bit of it I just rode on the dirt on the side of the road, much easier than trying to dodge potholes every 5 meters. Absolutely no problem crossing the border back into Thailand, just had to show my registration book and fill out some paperwork. Other than the craziness of PP, and grandeur of the temples around Siem Riep, I was a bit disappointed by Cambodia. Crap roads, boring scenery, red clay dirt forever, don’t even know how people eke out an existence there. Perhaps it’s a lot more interesting up north, but I was on a timeline to meet friends in Koh Pha Ngan for the full moon party. Spent about 2 weeks total in Cambodia.

The 250 km’s from the border to BKK felt like floating on a cloud after that crap road from Siem Riep to the border. Spent some time in BKK with friends before heading south to Koh Pha Ngan. Hopped a ferry with the bike at Surat Thani over to the island, and stayed there for a few days. Highly recommend getting there a day or two before the party if at all possible. After going to quite a few places, I got lucky and snagged a last minute opening at Paradise Bungalows, the original home of the Full Moon Party. Took a ferry over to Koh Tao for a few days to do some diving, then back to KPN for the bike and ferry back to the mainland. I then crossed the country to Khao Lak, where I did an awesome 4 night dive trip with Phuket Divers. I must have swung a deal, because I got 14 dives and earned my advanced open water qual for about $500USD. Dives took place near the Similan Islands, Surin Islands and off Richelieu Rock, in the Andaman Sea.

After that, I spent some time in Phuket, then headed over to Krabi, where I sold the bike to a local for about $250USD. Racked up about 14,000 km’s on it during my loop.

I then spent some time in Koh Phi Phi and Koh Lanta, before heading down the coast to Malaysia. Spent about 5 weeks in Thailand the second time. My trip lasted another 5 months after that, but only part of it on a motorcycle was when I rented one in Bali for a few weeks.

This trip was one of the best experiences of my life. I learned a hell of a lot about myself, and the world around me. Met amazing people, both locals and travelers. Cool thing about travelling SE Asia is that you can usually tell who the tourists are for the most part (typically not Asian and carrying big backpacks), and I ended up travelling with a group of people heading in the same direction multiple times.

Do not hesitate to do this trip if you have the time, and do not be afraid to do it solo. I did not spend a lot of money, and I never felt I was in danger at any point. Yeah, there were some mechanical headaches with the bike, and sometimes things didn’t always go my way, but hey, that’s life.

Yes, I did not do this trip on a very big bike, but I had read that you couldn't bring a bike > 175cc into Vietnam. I did not mind having a small bike, but if I were to do it again, I would try not to do it with a mini sport bike. I spent a lot more time on dirt roads than I thought I would. Oftentimes, not only were they dirt, but absolute crap. You won't be going very fast except when you're in Thailand.

DO NOT TRAVEL FROM TOWN TO TOWN AT NIGHT IF AT ALL POSSIBLE. I can not stress this enough. Huge potholes, pigs, blind corners, drunks, a whole plethora of potential hazards potentially await you if you do not follow this rule. Trust me, I learned this the hard way, a couple different times.

If you’re travelling in SE Asia in Dec and Jan, be prepared for some chilly/rainy weather. I left CO with one small bag, and had to acquire extra clothes/gear as needed.

Maps were not all that reliable if I recall, especially in Vietnam.

Do more travel research than I did before you start your trip. Then again, there was something to be said about just winging it and seeing where the road took me.

If you have questions, I think I’ll be notified of them if you comment here. Otherwise you can shoot me an email at [email protected], or hit me on Facebook under Donnie Van Gilder. It sure would have been nice to have FB when I did my trip.

ps. Keep the throttle on, but don't plan on having it on TOO much on this trip. Have fun!!!!