The Phrao Loop: AT Shakedown Ride

A late brekky was at the X-Centre then off pottering around the loop.

It wasn't such a great start though as just north of Mae Taeng in that lovely left hander before going up the hill to the Mae Ngat dam turn off the bike got the wobbles. :wtf:

Yep FLAT FRONT TYRE & it's a long time since I can recall getting a flat front.

My lucky day I thought. What next?
500 metres up the road was a Castrol Bike Point shop.
I rode on, s-l-o-w-l-y & popped into the shop. 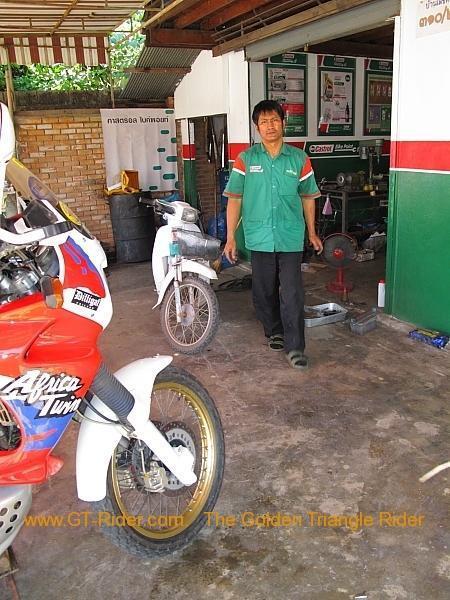 30 minutes later & 50 baht poorer I was back on the road.
You can't complain can you!

Life & riding in Thailand is GOOD!

On February 22-23, local people and other Buddhists who believe in the abbot of Wat Ban Den, celebrated his 39th birthday in Wat Ban Den, Tambon Inthakin, Mae Taeng, Chiang Mai.
Over 10,000 people from all over the country participated in the celebration that took place over two days. The abbot was presented with 39 money trees representing the abbot’s age, with each tree carrying 100,000 baht.

The abbot, whose full name is Kru Ba Chao Tuang Natseeloe, but people call him Kru Ba Tuang, was invited to act as abbot of the Wat Ban Den on March 9, 1988. At that time, the temple was neglected and untidy, with the buildings being very ancient and dilapidated. Kru Ba Tuang made his work to rebuild the temple to become the outstanding temple in Mae Taeng.

As part of that labor of love, Kru Ba Tuang has built around 15 items in and around Wat Ban Den. He has established a Lanna style temple made of teakwood and granite tiles, a sermon hall, the temple’s wall with lions images, monks’ canteen, toilets, monks’ residences, temple, meditation hall, great hall, temple road, drum hall, storehouse, Inthakin pole, and a Buddha image. These cost over 120 million baht, which was received by donations from the people.

One of his ongoing projects is a 12-pagoda building following Chinese star signs. The 12 pagodas, or chedis, come from the Lanna people’s mythology which believes that as they die, their spirits will stay in the pagoda of their star sign. Consequently, during their life they should make a pilgrimage to their zodiac sign. For many people, their star sign pagodas are too far away. Kru Ba Tuang decided that if all 12 pagodas were in the same place it would be more convenient for those who wanted to make their pilgrimage rather than having to go to another country.

The 12 pagodas construction will be supported by the money people gave to the abbot for his 39th anniversary. It is expected to be completed later this year.

http://www.thaiguidetothailand.com/thai ... ai-temple/
Wat Ban Den is an amazingly attractive and unusual Thai Temple. In 1988 the new Abbot of Wat Ban Den set out to create the most beautiful Thai Temple in the area. The Abbot, known as Kruba Tuang, inherited the Temple in very poor condition and managed to raise funds of several million Baht to rebuild Wat Ban Den. The main Temple building is built with teakwood and granite tiles and is in the Lanna Style and there are many examples of exquisite teakwood carving to be seen.
One innovative feature of Wat Ban Den is the 12 Chedis that Kruba Tuang has built. Each of these 12 Chedis is dedicated to one of the 12 Animals of the Thai Zodiac and sculptures of these animals are prominent throughout the Temple grounds. By the end of 2009, Wat Ban Den has had fifteen major buildings constructed including a Meditation Hall, Sermon Hall, Great Hall and an Inthakin Pillar. Whilst Wat Ban Den is not yet completed, it has already become a popular tourist attraction for both Thais and visitors.

http://www.chiangmaichimes.com/temples- ... n-den.html
When finally completed, Wat Ban Den ( Wat Den Salii Sii Muanggen ) will become one of the largest Temples in Chiang Mai. One of the main features of Wat Ban Den is the twelve Pagodas enshrining sacred relics of the Buddha. Each of the pagodas represents one of the twelve animals of the Zodiac . According to Thai mythology, when people die their spirit stays in the Pagoda of their birth sign. Thais believe they should make at least one pilgrimage during their lifetime to the designated temple . Unfortunately, some of these temples are far from Chiang Mai and a few are outside Thailand so the Abbot of Wat Ban Den decided to undertake the building of these 12 Chedi to enable Thai people, no matter their birth sign, to make this pilgrimage without the necessity for long travel.
Wat Ban Den is located at Inthakin, Mae Taeng, Chiang Mai.

And some photos from today 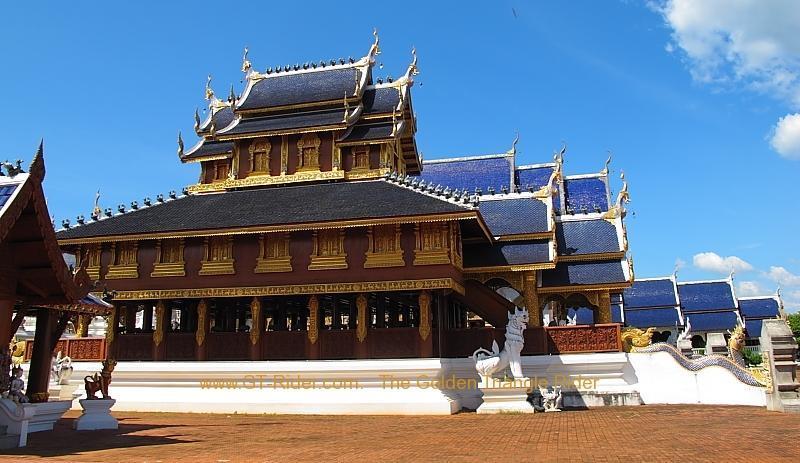 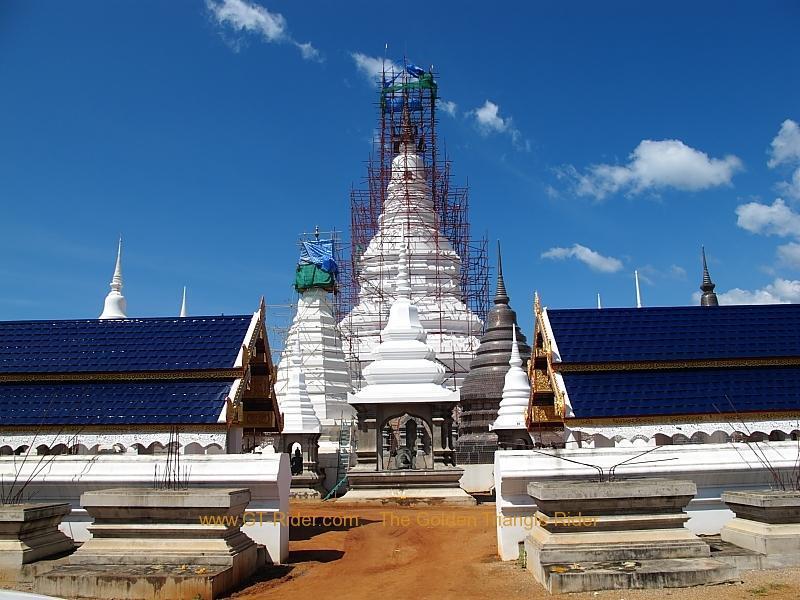 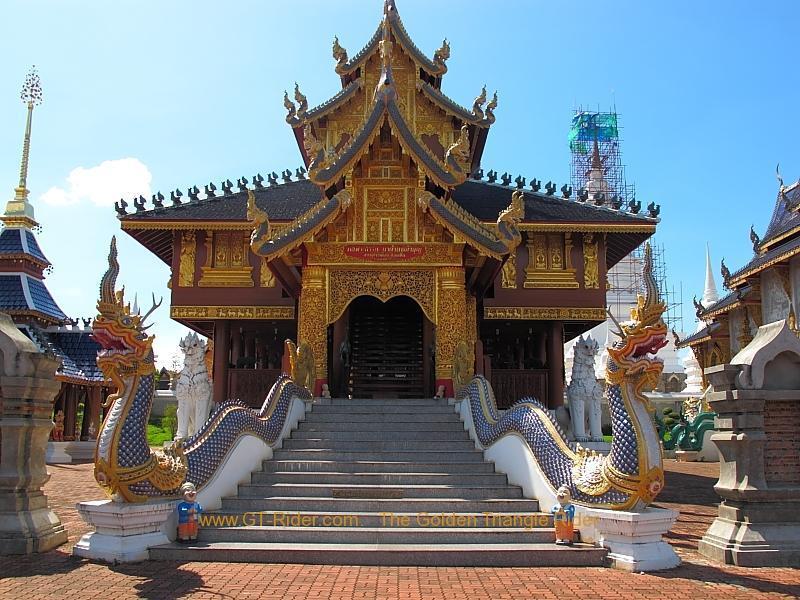 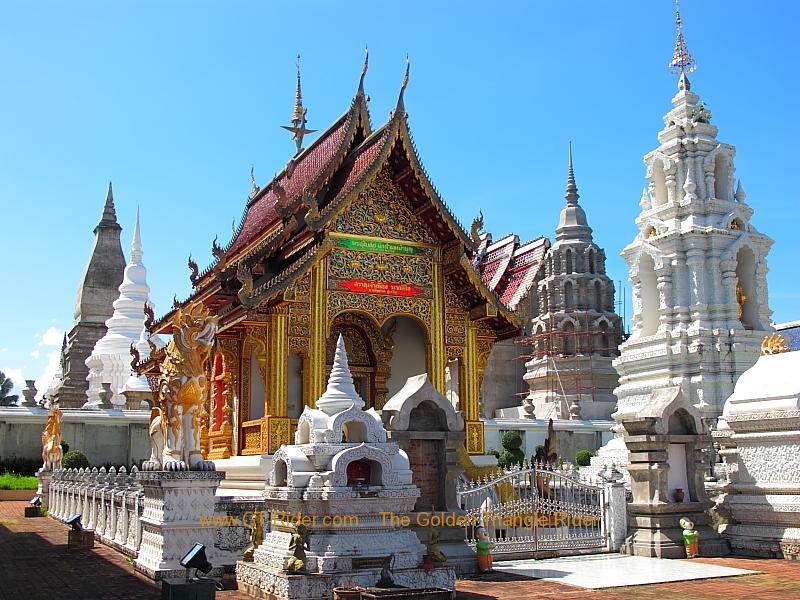 As luck would have it today was a tamboon ceremony with 2 million baht being handed over for further temple construction (Will it ever finish?) 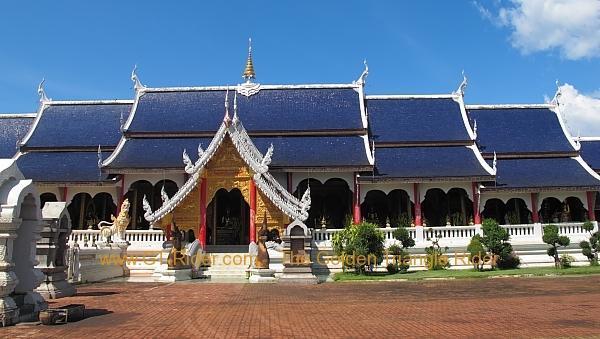 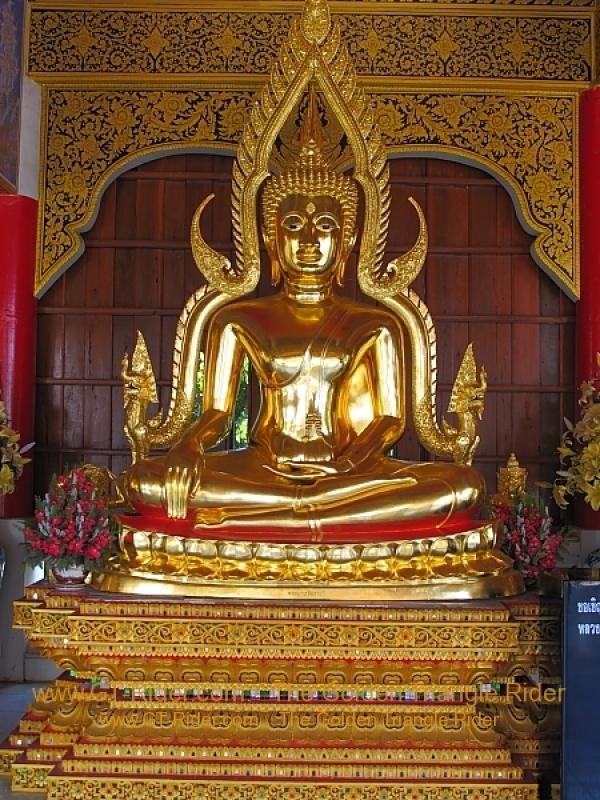 2wheels wrote: And are you satisfied with the major work done on your AT?
Click to expand...

Seems to be running ok so far. The motor is as sweet as & sounds beautiful. Even the exhaust note is a hell of a lot different.
But to be honest I won't be able to confirm until after I've got a 1,000 kms up. :thumbup:

Captain_Slash wrote: Glad to see you got the AT back David, is the Mae Ngat Dam full to capacity now?
Click to expand...

Lucky you David, only a flat tyre !!! Considering the odds you can be happy that nothing else happened. Like you I picked up my darling SRX (thanks for bringing me there) and had to return her to the shop after just 3 kms for the rpm drive fell off the cylinder head and soiled me from my knee down with engineoil. After the insert was done and once more telling Somchai that a small screw like an M6 doesn't need to be tightened with 50 Nm when embedded in an aluminium thread I rode her happily home only to discover that 500 meters before my home the exhaust fell off....... then I had to fit the Dynojet and found just another "over tightened" bolt on the carburator scoops, and another insert.......sometimes this can be frustrating.......but anyway the carbs have been cleaned in the shop and then messing up the spring that closes the petrol flow in the bowl, she cut off at 4000 rpm......starved of petrol, why I gave them the copy of the repair manual I don't know, maybe they use it to wrap some fruits........
rgds, FR 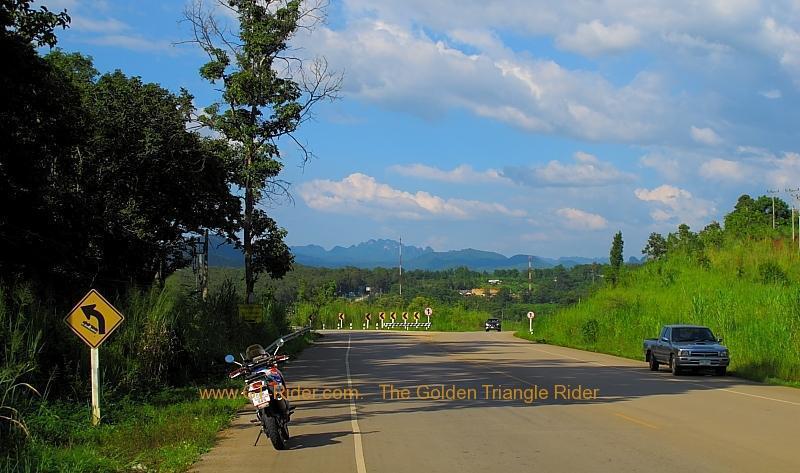 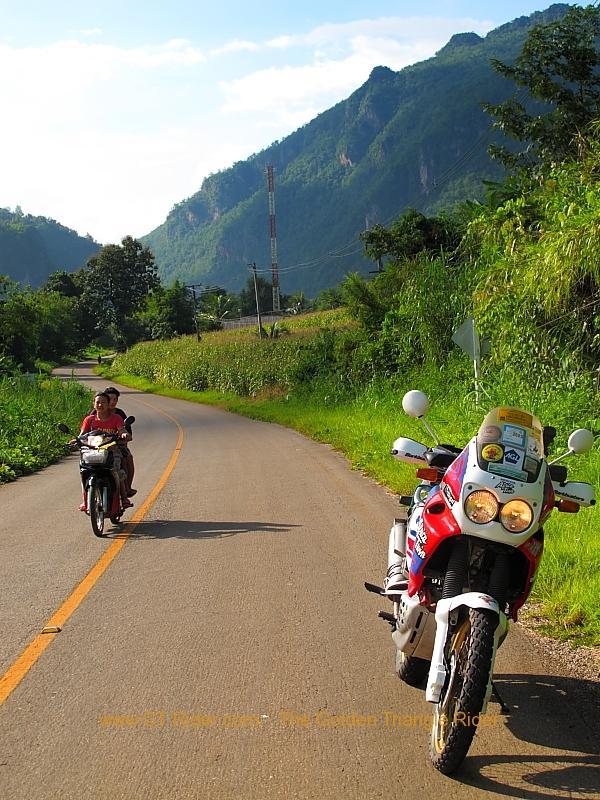 it was a sweet day out riding & running the AT back in. 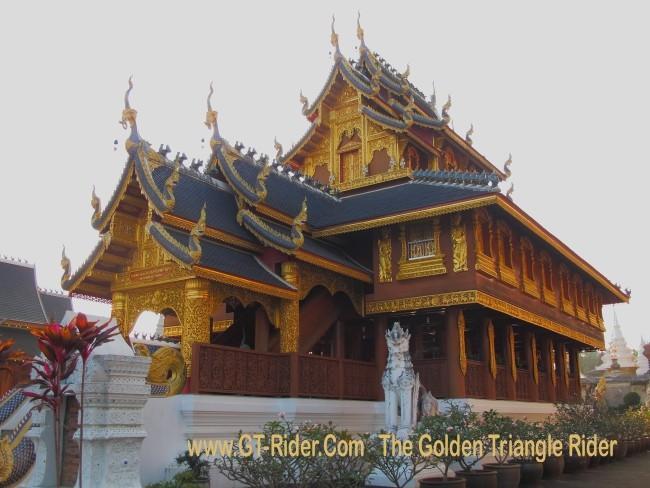 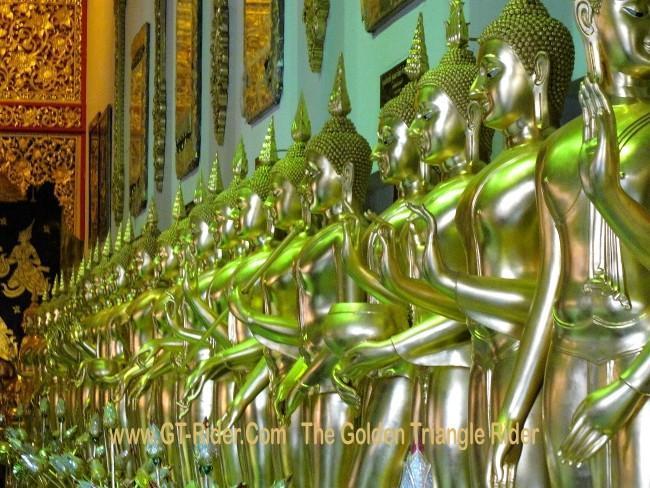 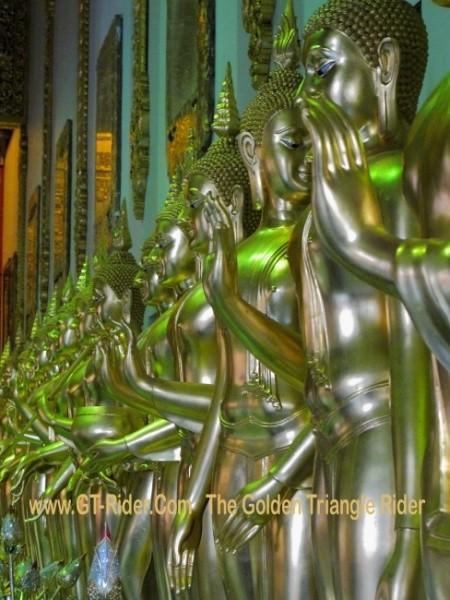 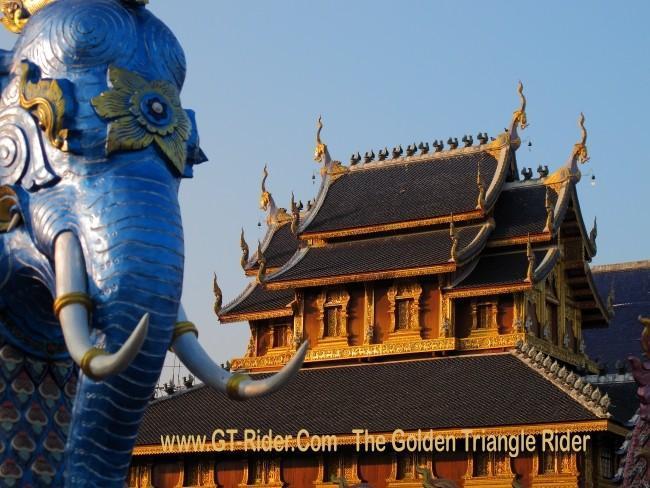 An absolutely stunning temple & well worth a visit.

Another piece of info

The Wat Ban Den located North of the city is one of Chiang Mai's most remarkable temples.

It is also one of the largest temple complexes in Chiang Mai province. The complex contains a large number of structures including an ordination hall, a viharn, a meditation hall, the kuti or monks living quarters, a drum hall and several other buildings.

Although the structures of the Wat are relatively new, they are built in traditional architectural style.

When the Wat Ban Den got a new abbot in 1988 the temple was in poor condition.

The new abbot named Kru Ba Tuang has managed to raise huge sums of money, donated by local people and Buddhists from across the country. Abbot Kru Ba Tuang has completely renovated the Wat Ban Den and added a number of impressive structures.
The wooden viharn and other structures

One of the more imposing structures of the Wat Ban Den is a very large Lanna style teak wood viharn with a three tiered roof. The viharn is an attractive building with its blue roof and golden bargeboards, decorated with intricate wood carvings.

Many of the Wat's structures are guarded by large mythical Naga serpents on each side of the stairs. All over the temple grounds are large white lion figures called Singha in Thai, acting as guardians.

The temple complex holds 12 chedi's or pagodas. According to ancient local belief when people die their spirit will stay in the chedi of their Zodiac animal sign. During their lifetime, everyone should make a pilgrimage to the temple of his Zodiac sign.

Every Zodiac animal sign has an official temple in Thailand. Since some of these temples are far from Chiang Mai, abbot Kru Ba Tuang decided to build 12 pagodas in the Wat Ban Den, each one representing one of the Zodiac signs.

Although the temple complex is relatively new, it has already become an important place of worship for local people and Buddhists from all over Thailand.

In 2003, during the celebration of Kru Ba Tuang's birthday thousands of people came to the temple grounds and donated 39 "money trees" each containing 100,000 Thai Baht for the abbot's 39th birthday.

Check it out sometime if you haven't already.

Quite impressive looking temple. Definitely worth a visit during my next northern ride.

Wat Ban Den
The chedi(s) at the back 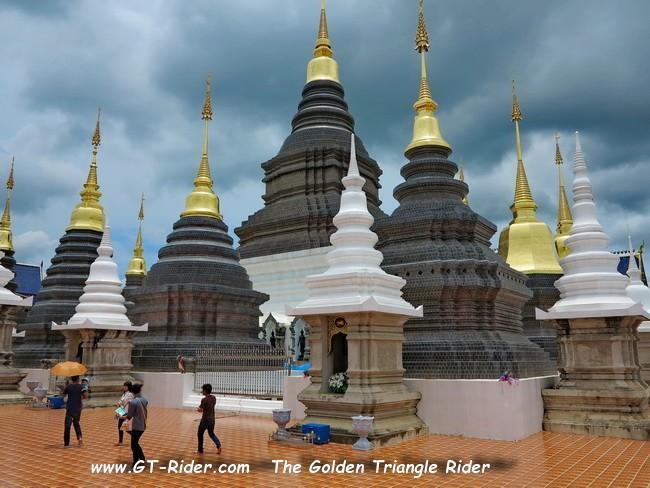