Those mountain roads east of Nan.

A few weeks ago I finally got myself to Phu Chi Fah on a m'bike, something I have been meaning to do for a few years. From there I decided to continue my adventure by taking the 1148 which I had been told was worth the effort, and it was. That brought me to Pua where a bit tired and with no route finder I gave up looking for the smaller roads and went on to Nan and then Phayao. Back home I had a look at what I'd missed and felt an urgent need to get back to Pua and try again.

I wont go over the plain and boring bit but start with the fact that about 40kms out of Nan was I stopped at a traffic police-health post and due to the recent uptake in Covid activity was temp checked and had my passport details and address put in their system, 10 minutes with a lovely young lady who spoke excellent English. I arrived at Nan for a late lunch and then hit the main 101 highway north out of town.

Much of the 60 kms route is at present being made into 4 lane highway but unlike the infamous 118 the work is ongoing on the sides and the original road is more or less intact and decent, just a lot of dirt and dust around and big machines maybe crossing your path.

The small town of Pua has been pretty much cut in half by the 101 highway and through the middle its been divided to keep the parked and shopping traffic off the main road. The only small hotel I could find was the Parichart Place, obviously feeling the strain of no domestic tourists it looked neglected and sad but the bed and shower were fine.

Heading north there is no obvious signs for the routes that you want going east but if you U-turn almost straight out of the big PTT station at the north end of town (a full tank a good idea) and then take the little lane just after the Tesco store, its only 100m to the 1256, where a left gets you on the route to Doi Phu Kha National Park.

The houses as you depart this town show its been a prosperous little district and the houses and temples are smart and show signs of wealth.

Then you hit the inclines and its all about natural beauty and industrious farmers. The road is in terrific condition, good surface and well painted, a joy. I stopped a lot to look at the steep slopes, the mountains and the farm buildings set in these narrow valleys.
The only sadness being the bags of household litter chucked on the verges, a real shame. The hills were denuded in places by Hmong agriculture and forested in others, with far more greenery than the trees in my dry and desiccated area of Tha Ton.
I was most amused to find a road sign for a tree, and even more amused to find it was a sad little thing surrounded by some magnificent beauties that didn't get signs.
The viewpoint was closed due to Covid, a strange thing after finding the Tesco open and busy, whereas I appeared to be the only visitor to the district, and the car park area was big and open with little chance of viral infection. The park headquarters was also closed, not that I would pay a fee to see what I was already seeing from the road.
The downhill run to Bo Klua was as good a piece of road as you would find anywhere, a credit to the province and a joy to roll down.

Here you meet the 1081, a road that comes down from the Lao border in the north, then runs south and west, curving around the hills and ending by heading north to Pua.
Only 6 kms to the north is a newly created tourist village Ban Sapun with a waterfall that I thought worth a look but once again the Covid drama spoiled my plans and the whole village and the nearby park headquarters for Khun Nan were off limits.
This district appears to have been hoping to get on the domestic tourist route, probably hearing of how Phu Chi Fah has prospered from similar geography and the strange desire of Thai's living in the big cities to get 'back to nature' and wear big pullovers and woolen hats for a couple of days. sadly the virus has stopped everything.
After a short section of valley road there's a junction, left for the 1333 and right for the 1081 which is the one I took.
More smooth highway and a big climb back up into the hills, one section of road being completely resurfaced but nothing only a 500m length and by the look of it soon done. Not the perfect atmospheric conditions I'd had when I was in P.C.F. but no big burning and just a touch misty. Some hillsides totally farming, some left to natural forest and always more and bigger hills in the distance.
On the downhill side of this route I took a left onto the 1257 which heads off to Nan when you exit the hills. This road was more 'local', broken surface, some stones and gravel as a result and a bit bumpy but it went back to a good surface after 20kms or so. No traffic, a bit of a worry for a puncture or a breakdown, could be there for hours before a truck came and then they'd be Hmong just hacking back home after a trip to market.
Once I came down to the lower hills it was rubber plantations and then low land farming and Thai villages. The 1169 running south west into Nan is yet another good road and where it climbs over the steep hill at Kiew (kew or kiu) Muang you hit the by now typical domestic tourist coffee shop - restaurants with good views in well finished style, a good place for lunch.
I took almost 5 hours to get here from Pua but stopped often for views and photos. I had a delicious ice coffee and pork fried rice costing 110b but felt it worth it for the pleasant staff, good taste and nice view. 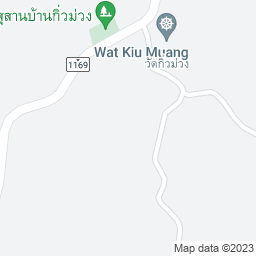 www.google.com
Just another 30 mins and I was back in Nan and surrounded by traffic dust and fumes.

My only regret is that I couldn't do the 1333 at the same time without going back over one of the roads already taken. But I suppose it gives me another reason to go back and see some more, which I no doubt shall. At may age there's no putting things off for later, I need to go for it now!