Waited for some of the guys from out of town to arrive and finally got away at 8am Saturday morning. We started off with about 17 bikes of all types from a Road King down to my Phantom which was the smallest by far, and went through Yasothon and picked up a few extra bikes there, and the same at Roi Et. A couple of good looking pillions also appeared at some stage, I am sure they weren’t there when we left Sisaket – must be some quaint local custom ?
The first Harley died after about 20k when the ignition coil failed. That was the end of Chows w/e, which was a pity because he was one of the main organizers of the trip. We waited about half an hour for that news and headed off again. Much of Isaan is still awash with a lot of surface water and swollen rivers being fed from up country but the roads were dry.
Weather great, one of those days when you are on the open road settled into the trip, the sun is shining the bike is humming, the road is good, everything is going well and you think - it’s great to be alive – God is good.
It’s always interesting as a farung going with a bunch of Thai riders. Nobody appears to know exactly where they are going or what's happening. The mantle of leadership rests on a few, and different ones appear to know different parts of the mystery. The pre arranged lunch break at Roi Et was at an obscure restaurant whose location took many phone calls to establish. Every time we stopped, which was often they all got out their mobiles and stood in a line facing the road talking to who knows. Maybe they were talking to each other! 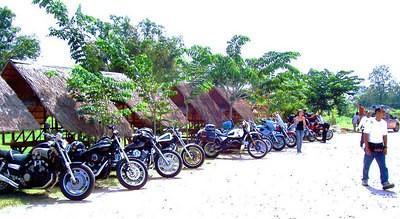 There was one group that had me confused for a while. It took me till Sunday afternoon to figure out what was happening, I think! There were 7 of them and seemed to share 2 Virago’s. Their ute would come and go and I would see these new riders I didn’t recognize. Each one would do a spell and then get elbowed off for someone else to have a go. One of the Virago’s broke a throttle cable and they rigged it up with a pair of vice grips. How they rode it I don’t know but it didn’t slow them down.

The 2nd Harley died in Khon Kaen. But the local Harley man was able to breath life back into it with an expensive new battery. Only took 3 hours while we all waited, thankfully in the shade. I guess any brand can have a battery failure !
One of the leaders estimate of a 4 hr run and even mine of 6hrs went by the way when we finally arrived at 6pm, 10 hrs after setting out- the joys of group travel.
For the most part the speed was around 110-120 which was fine for me but in the 4 lane between KK and Udon they were touching on 135 and I had to wring the Phantom right out to keep up. The TA200 is quite happy all day up to 125 but starts to vibrate a bit over that, so OK only for short stretches.
The final approach to Nong Khai was a procession and the bikes parked in a semi circle around the fountain. They numbered over a hundred and all the usual suspects were there from the Road Kings down to the Vespas. I was interested to see a number of Phantoms dressed up to look important. Surprising they could move with all that extra gear on. We parked our bikes and they trucked us to the hotel a couple of k’s away. We came back by Tuk Tuk after showering up and rode back to the hotel after the party. We stayed at the Huan Lai Apartment ph 042413597 at B350 A/C with secure parking underneath. 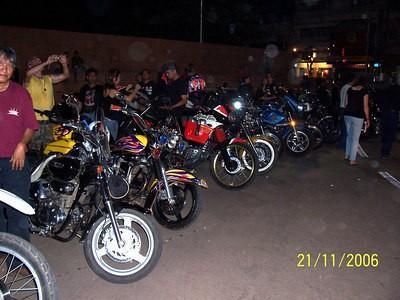 The party was a typical Bike Night party with a succession of groups, singers, dancers, food and drink, some donations to charities and giving and receiving of colours by visiting groups. Also the usual farungs making asses of themselves on the stage and producing the only off colour aspect of the evening. They had a few give aways for youngest, oldest, farthest away etc and the Sisaket boys pushed me forward for the oldest. There was evidently some guy down the back who was 72 but never came forward, probably couldn’t get his walker past the drunks, so they gave me the prize of 3 litres of Valvoline m/c oil.
Photos 14, 15,
The roads were excellent all the way except for a few wet season pits that jarred the bones when you hit one. Not all that interesting with hardly a hill all the way.
Return Journey
It took until 10am to gather the riders for the return journey on Sunday and then about 6 bikes decided they were going back along the river through Mukdahan. It was well after dark that this group got back to Sisaket so I am pleased I didn’t join them, although the road would have been much more interesting..
The rest of us came back by much the same route we went up on, except that we did a small detour on the 109 through Kalasin and got to Sisaket at 1800.
Nearing Sisaket on the way home and a hero in a Benz tried to overtake the convoy forcing some of us to the verge. All I could do was shake my fist but the couple on the Africa Twin took chase at speeds over 160kph and let him know the error of his ways both verbally and digitally.
Debrief with cold drinks at the Sugar Pub whose owner is one of the riders.
For all of us a good weekend and good to have some company after mostly riding alone.
Cheers, Peter

"The Journey is the Destination"
R

Was this a guy that showed his ass to Udon superbike club for refusing to park or ride in with the guys on choppers. Only heard part of the story what did you see
B

Brilliant story there Peter, sounds like it was a cracking journey.
P

Rigger,
all I saw or heard is what happened on stage. Didn't know there was a story to go with it.
Don't really think I want to hear it either, so it's probably best left on the stage at Nong Khai. The behaviour was better at Sa Kaeo.
Cheers, Peter
M

If you think a few ferangs having a good time is bad behavour then youve got in the wrong pastime, bike clubs are bike clubs ,in the states its all tits out and yeahaa, in the UK same old same old, i.e. storming the castle , bulldog bash etc, all have a colorful characture or two and if they feel thats what they want to do with there various clubs backing then its down to them, No one except you seems to have been put out by the incident and as the guy who showed his arse to udon superbike club for blanking all the chopper clubs waiting on the main road 20kms out for the ride in, well good man and well done, Pride and Glory Nong Khai is a chopper club and for the so called superbike boys to just ride past and dont pay there respects to other clubs is not what its all about.

any way whats done is done and it was a good evening after the plastic fantastic boys left bouncing there bikes off the rev limiters in the bike park, at 9pm .

We all ride because we are what we are, Bikers at heart, no bad feeling need to be aired on websites about ferangs making arses of themselves, thats your opionion and no body elses .