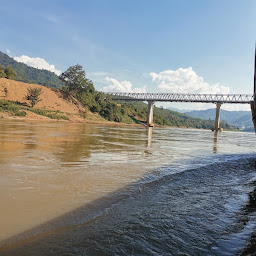 The Konteun-Huaykeo Bridge, which spans the Mekong River to link Bokeo and Xayaboury provinces is more than 66 percent complete.

Bokeo newspaper reports that Head of the Bokeo Department of Public Works and Transport, Mr. Khamphet Phommasing, says the bridge pillars have now all been installed.

The 503-meter bridge connects Paktha District in Bokeo province with Khop District in Xayaboury province over the Mekong River.

The concrete and steel bridge is eight meters wide, with 1.8-meter-long walkways on either side.

Construction of the project began in October 2017, funded by the Lao government at over LAK 180 billion, to be completed within 36 months, according to Mr. Khamphet.

“Construction of the Konteun-Huaykeo Bridge on National Road No. 2243 has experienced delays due to a number of difficulties, including financing constraints, the project site’s remote location, and an abnormal Mekong River level,” said Mr. Khamphet.

“We are now attempting to speed up construction to meet our new deadline,” Mr. Khamphet added, saying it should open for public use next year.

After completion, the bridge will be critical for the region’s economic growth by increasing the flow of products, providing a shortcut for vehicles passing through the area, and facilitating commerce between Laos and Thailand.

It will also significantly cut travel time from Vientiane to Bokeo via Xayaboury.

Some images of the bridge construction from the GTR Mekong boat crew friends in Laos.

Might as well get a bridge. Neither ferries in the area serves ice cream.
M

I reckon it must be damn close, if not already finished.
I will try to get some new photos.

Update from my Mekong boat friend. The bridge is not finished yet.
They will send some new photos next trip.
Last edited: Jan 19, 2023

Nothing wrong with a car ferry crossing the Mekong, but the bikes ones can be nerve racking.

Thanks for the reply.

The car ferry it is then, another excellent adventure

Your'e in luck. Some new info. via Chaweewan Phonok on FB

The first day of our Laos trip. On 15 January we left Huay Xay and followed the Mekong to Pak Tha.
There we took a rusty car ferry to the other side, the narrow strip of land below the famous Thai viewpoints of Phu Chi Fah and Pha Tang.
We planned to explore this remote corner of Laos.
The road that follows the river was recently graded but very dusty.
Below Pha Tang is a turn-off that leads straight up to the top of the ridge near Pha Tang to a viewpoint that belongs to Laos.
It is a new tarmac road but unfortunately not yet open to the public. We were stopped halfway at a military post.
We continued along the river and passed a construction site for a new bridge and a dam in the Mekong. We found a hotel and restaurant in the town of Kop.

The bridge status on 15th January

Did this journey yesterday and have little to add that hasn't been covered in the Facebook post above.

The only thing worth mentioning:

After a quick visit to Chiangtong, I couldn't see any reason to sleep there, I decided to head to Khop.

I took the route suggested by maps.me, as it was much shorter than Gmaps:

Much of this route, winding through farmers fields, where they happen to be planting rice, is particularly bad Good fun, but rather slow going.

I made a few snap shots of the bridge, I'll post them some time.


Thanks again for your replies.
M