You must be kidding! Driving in Thailand

They said: “You must be kidding”! Unfortunately my narration is far from exaggerated. I have not been everywhere yet and do not always carry a camera. However, what I have seen is enough to be scared but not enough to give up the fabulous journeys on the Thai roads. I have learned that driving can be done on both sides of the streets … simultaneously! So why bother to make a choice, like in the West? There are many "funny" or worrisome stories to be told. I welcome all additional contributions (bikers have plenty of them) on my blog post. 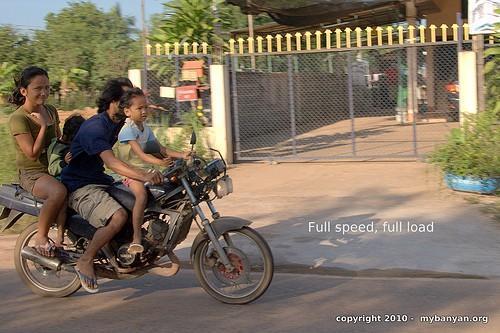 The thing that has kept me safe, to date, riding in Thailand is the understanding that we live in a nation of children. No matter what the vehicle or the apparent age of the operator, the driver is 6 years old inside. This may not be true 100% of the time but riding with this understanding has saved my life on a number of occasions already. Not to say that I don't appreciate a people that can see the world through the eyes of a child, where the main focus of life is sanook (we westerners have maybe grown up TOO much), but where driving and business deals are concerned (negotiations begin AFTER the contract is signed) it's definitely a liability. Ride safe out there y'all and don't be surprised at ANYTHING the other driver may do! :roll:

You are right, keeping a young mind and enjoying it all the life is a great characteristic of our Thai hosts. That's also why we love them. The hurdle in business and on the roads might be reduced by experience (mistakes) and hearing what others have learned. It makes us attentive that ANYTHING can happen, and to expect it (Murphy's law). Had I learned this earlier, than I would still have a straight clavicle (it's a minor damage as this bone is only used by birds).

I do not think that driving in Thailand is any more dangerous than driving anywhere else. It is certainly no worse than say Indonesia. Oh two wrongs don’t make a right I can here the “panel” saying.

I wonder if what the nay sayers actually mean is that they have to actually concentrate on the driving when they are here and not being able to do all the other things that people do instead of driving. As an example, I am always amazed when drivers involved in a conversation actually turn their head to look at the passenger instead of the road.

When driving in our own countries we got used to certain things that are not necessarily laws, we learn to drive sometimes with a local sixth sense. Example, people turning right will usually move naturally towards the centre of the road. There are many other such examples. Here in Asia there are very few such subliminal indicators one could argue none. Sometimes we get lured by them and I'm not immune. The other day the car in front "indicated" and moved to the left so I moved to the right to pass and he/she attempted to turn right. amid much honking. I was distracted by something and the subliminal part of my brain saw a signal and a car moving to the left. As I realized later he/she actually had the right hand signal on but I was in “western” mode and reacting with sixth sense.

A lot of what we (an by we I mean people born and raised in the west) do in life was gleaned by assimilation we weren’t necessarily taught it. I learned how to fix a bicycle by watching my father fix mine and he learned by watching my grandfather fix his.. Same goes for driving. Even before we were old enough to drive we were passengers and observed what other do and my father watched his father etc. In Asia that same transfer of information hasn’t necessarily happened for things technical. I used to wonder in Indonesia how an industrial tradesman could sometimes not see an obvious error until I realized that the first piece of technology his father saw was a planed piece of lumber. I used to sit cursing behind some old Indonesian farmer in a 30 year old Toyota driving at 30mph on a flat wide road. Then It occurred to me that from his point of view 30 was white knuckle speed as the fastest thing he had before was a buffalo. Thailand has a huge number of first generation drivers so what would we expect.

Some of the other things we complain about also happen in the west. What about the farmer in rural France who always drives down a deserted road on his tractor. He’s been doing that same journey for 20 years and one day Joe holiday maker comes round the corner. Who is more surprised to holiday maker or the farmer. Thais ride step-thrus in villages where the roads may not be paved, there is not much traffic and there are certainly no lines. Then we complain when they ride/drive badly in the cities. U turns, X turns (whatever they are) are just different to us as we are not used to them.

One hopes that GT-Rider forum members as motorcyclists concentrate more, are more observant and less distracted when we drive. We have to be or we wouldn’t be here.

Sorry I’m ranting here as a distraction. The wife has been bending my ear about everything that is MY fault.
S

[quote quote=mikerust]I do not think that driving in Thailand is any more dangerous than driving anywhere else.

Thanks Mikerust
I would support that kind of approach. I had a chance to drive and ride in quite a few countries and believe there is a logic and tradition of driving everywhere. As guests we ignore them most of the time. In the mountains in Pakistan the lorries just drive on the hillside of the road - one lap this is the left and after the turn it is the right - the road can only bear the weight of l trucks on the inner / hill side - up to you to react, you better have a learning curve.

And as you pointed out we have our own assumptions . For us a white line is a 'wall' not to be crossed at any circumstances, thus we lost our ability to watch out screen for eventualities outside that axioms.

No, I'm not pleading for anarchy. I believe traffic rules make sense, especially to assure fluidity if there are many users. I also accept that in our host country there are differences among common users and VIP users (in Cambodia the larger vehicle has priority whatever the rules or even the traffic lights say).

But I have my problem at one particular phenomenon. again and again I see foreign drivers adapting attitudes that are 'Thai' and jeopardizing the fluidity (and safety) of the traffic. Should they also be considered as '6 years old', as postulated earlier? What is their justification?

Soon it's Songkran! Accident prevention campaign did not forget us. Deterrent pictures are more graphical than final statistics, but both are scarring. Let's hope that numbers are lower this year. It's true that road accidents occur in other countries … but for the time being, I am living in Thailand.

Songkran accidents prevention. The legend highlights how protective helmets are. Nothing about the speed of 240! So the offence would cost about 100 THB (negotiable).