Bangkok to Malay 2008 MotoGP on a Ducati Monster..and back!

The outbound leg was to be an easy ride as I had most of October free.

My route with overnighters and kilometers travelled- 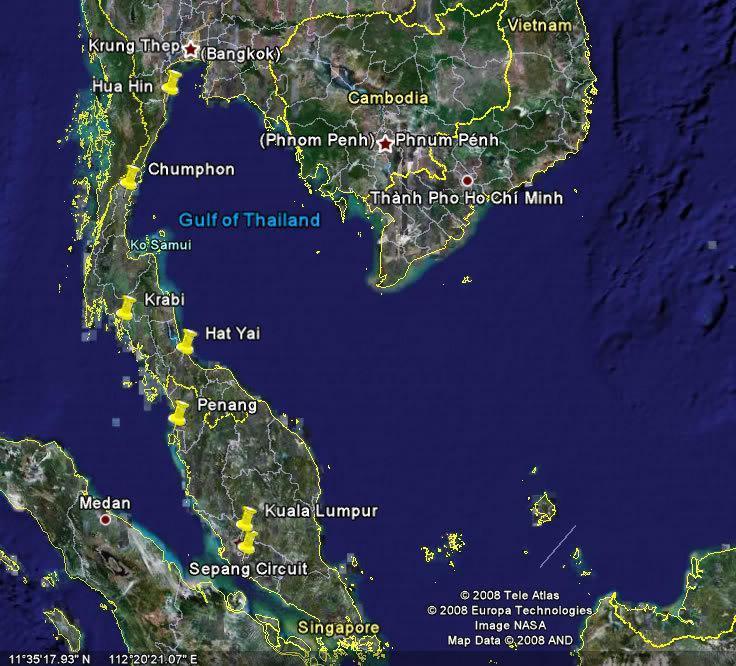 Rama II road was pretty awful as usual but once out of that it's open throttle all the way. Hua Hin was uneventful. Low season blues. The Pueng Pen hotel opposite Mickey D's at 980 Bt a night was good value. Big pool and in-room safe.

Chumphon? Why do I keep stopping in Chumphon? I never learn. No redeeming qualities whatsoever though I've heard the surrounding areas have some nice resorts.

Chumphom to Krabi was a nice ride with surprisingly little traffic though the odd float and parades around the villages slowed me down.

Scenery was eyeopening though these pics don't do it justice.
Used Adobe to make some panorama images here, hence the joins.

Deserted highways were a huge relief from the traffic nightmare that is Bangkok. 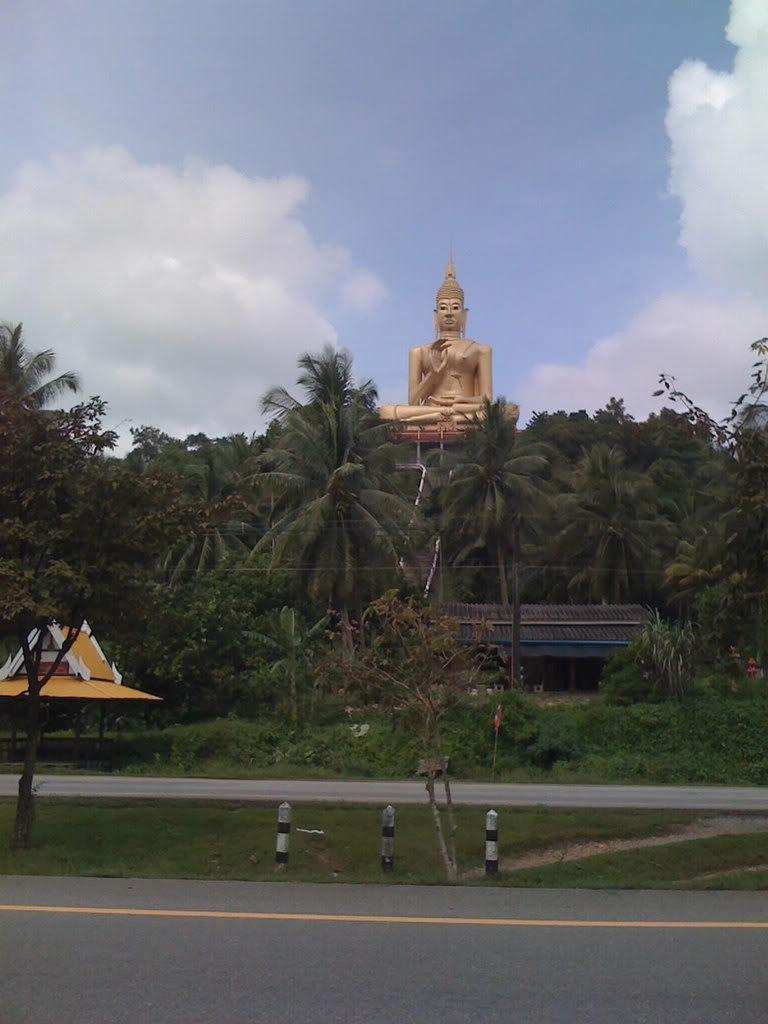 Krabi town was nice and .. er ..quiet. Actually it appeared completely deserted.
WHERE IS EVERYBODY!?

Sunset from the town center.

Krabi to Hat Yai is a very good ride though I got my first soaking in the mountains just before Trang, I managed to dry out (except crotch, natch) before arriving in Hat Yai.

Once in Hat Yai, I checked in to the Siam Center hotel. My grand ideas of checking out the nightlife disappeared as I hit the sack early, tired from my the wet twisties earlier in the day but it was tempting to call out for a takeaway.

A room with a view. (Another dodgy Adobe panorama effort).

Crossing the border the next day was a bit of a runaround but after being given contradictory directions by Thai customs staff, I eventually got the two pices of paper needed. Handed one to the Thai customs on departure and just showed the other to uninterested, sleepy Malay customs guys and then sped through onto Penang.

The Malay roads were excellent tough the trip was fairly bland. No potholes here.

I decided to take the ferry over to Georgetown and the long bridge on the way back.

The Penang Bridge in the distance is 13 kilometers long apparently, making it the longest 'something-span' bridge in the world. Okay, whatever!

I like Penang. Old-world charm a plenty. The view from the Cititel Hotel on Penang Road. About 1,700 Bt (or 170 ringgit) a night. Excellent hotel!

Excellent Indian curries on Penang Road though thoroughly unhygenic as I was to find out later while in the saddle.

Strangley enough, this place isn't a temple but a hotel. I must have been drunk when I took this photo!

Whatever you do, don't make the mistake of staying at the Eastern Hotel in Chulia Street (as I did back in the 80's), besides being a dump, it's next to a mosque so you have some tone-deaf Imam screaming away at some ungodly hour, hence the loudspeakers.

Well, finally on to KL. What a traffic disaster KL is. A thoroughy miserable experience upon entering the city. Gridlock and a rainstorm. And no idea where the hotel was.
Met up with two Ducati riders from Singapore but got separated in the traffic.

Followed the signs and eventually arrived at the Capitol Hotel in downtown KL soaked to the skin. And no parking area so had to park in the adjascent I.T. shopping mall's basement carpark. Grrrr!
My mood was somewhat improved as the Capitol was again a very nice place to stay but I don't think they were impressed at the puddles I left in reception.
I've been very lucky with hotels so far with the exception of Chumphon.

Nice view of the Petronas Towers on a misty day. 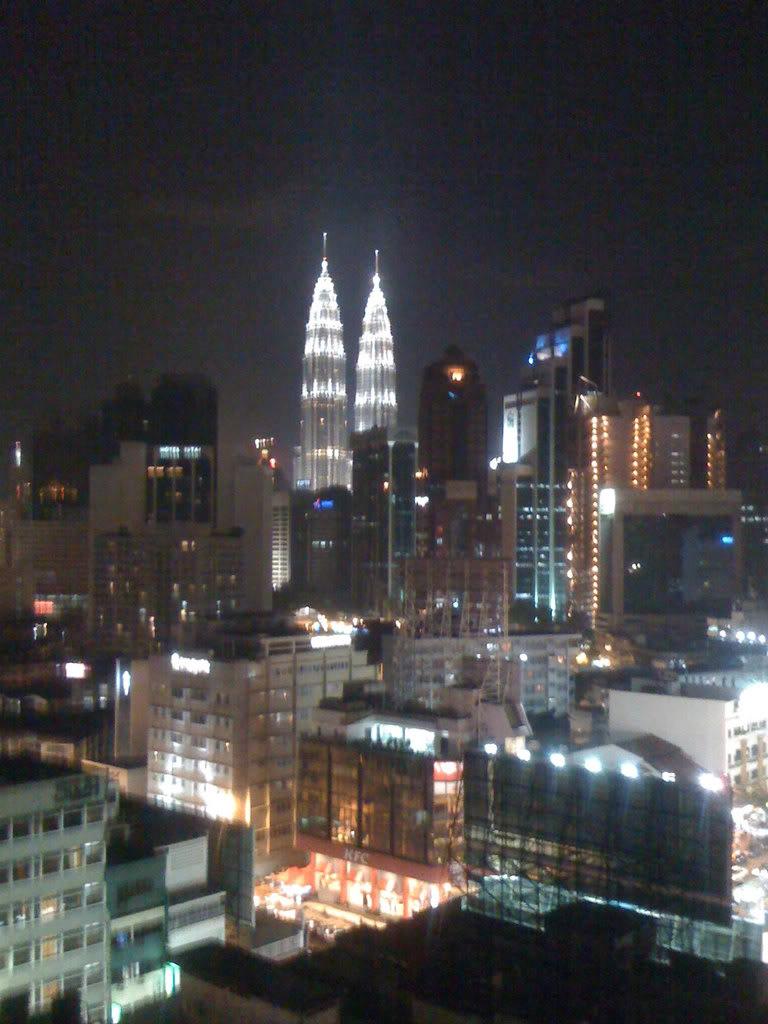 Don't know where you stayed in Krabi but if you go round the headland from Krabi beach to Noppadon (spelling?) beach almost immediately on the left on the beach is an open bamboo type bar. Seem to play Bob Marley most of the time, the beer's cold and the sun sets right opposite you across the sea. Great photo moment.

Once comfortably settled at the Capitol Hotel, I rode out to the Saturday practise session at Sepang. Met a few Malays on superbikes who showed me the way to the circuit though it's not particularly difficult to find. Well signposted on the way to the airport, KLIA.

Eye candy at the Ducati stand. And well, I'll be. The 1098s is 200k baht more expensive in Malaysia than Thailand.

Hey kid! Yeah you! In the white t-shirt. Eyes off!

Some more panorama shots, this time of the pits. 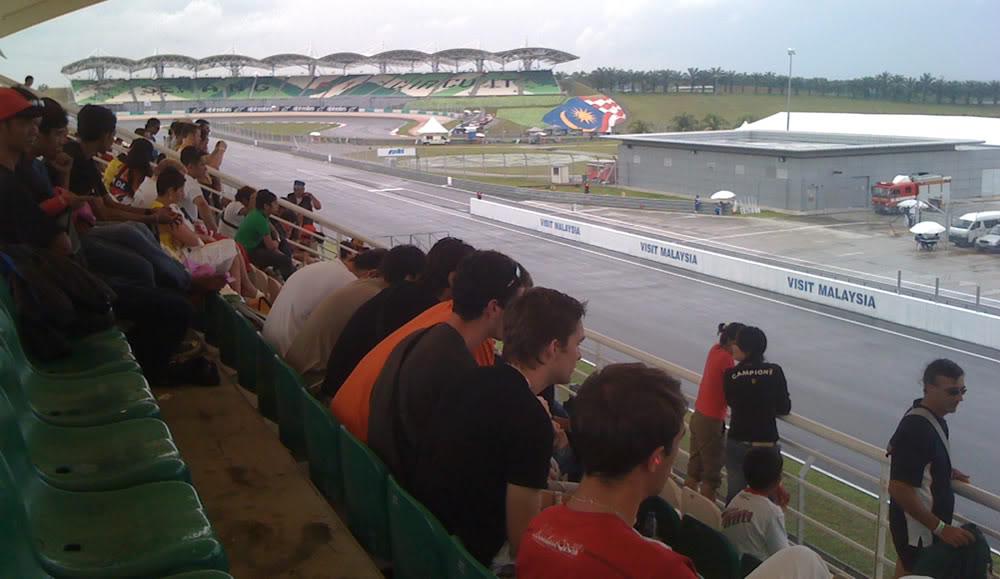 My main man Stoner this time. But boy, he had a bad race.

And they're off! Rossi and Stoner are close.

The 3 days in KL went quick. Before I knew it, back on the road again to Penang.

I was too much in a rush to take photos on the way back. It's a very nice ride up past Songkhla and NST with the highway only a few meters from the sea.
The last 100k's of the Penang-Surat leg were rough. I tried to make the ferry at Don Sak for Samui (unaware they stopped running at 2pm) after passing Nakhon Sri Thammarat and ended up with a rather lengthy detour on my hands.

Entering Surat was a low point on this trip. Driving rain, poor visibility and rather tired after I think close to 600 k including the detour. Now I know why people buy touring bikes but they're not for me.

I stayed at the Saowaluk Thani on the main road. Not a bad room for 800 Baht. The 'oil massage' place in the basement would have come in handy for those sore, hard to reach places but after what had to be the worst Thai buffet I've had in 16 years in Thailand, I was off up the wooden hill to Bedfordshire, asap.

Writing this now, the rest is all a blur. The Indian curries from Penang finally caught up with me on the Surat-HH leg. Stopping off every 100 klms was a pain in more ways than one. I had a sphincter the size of a pinhole and some of those service station toilets resembled the one from the movie, 'Trainspotting'.

Lingering after effects were limited to a right hand that couldn't make a fully-closed fist for a day or so.

All in all a great experience regardless of the weather. I would do it again (I think!) but maybe not solo. And in the 'not-rainy but not that hot' season.
The ride would have been a lot easier if I had been a few years younger, a few pounds lighter and not on a sports bike.

Thanks to the Apple IPhone for the images and Google Maps for directions when in the middle of nowhere.

Total travelled 2,840 kilometers but with 'detours' closer to 3k I would guess.

Rustic Charm
Good little report, glad you had a good time & a safe trip.
Thanks for the contribution.
C

Enjoyed the report...thanks!
Your panorama photos initially looked fine to me...until first one of the track which looked like it had a two 90-degree turns in it 8)
But, then I've yet to learn how to create a panoramic pix!

Fab report and pictures, When you planning to head back to Malay, i might consider to hook up,, something like just tour around main land malay, via east coast towards to SG and back west coast visiting Penang and Langkawi...
that would be long journey but nice and slow i think it would be memorable

cdrw wrote: Enjoyed the report...thanks!
Your panorama photos initially looked fine to me...until first one of the track which looked like it had a two 90-degree turns in it 8)
But, then I've yet to learn how to create a panoramic pix!
Click to expand...

I just uploaded them into Adobe Fireworks. The track one was tricky to line up so had to rotate them slightly. The iPhone camera isn't that great for distance images.

Fab report and pictures, When you planning to head back to Malay, i might consider to hook up,, something like just tour around main land malay, via east coast towards to SG and back west coast visiting Penang and Langkawi...
that would be long journey but nice and slow i think it would be memorable
Click to expand...

I would do it again but preferably not solo so any company would be welcome.

I have 2 months holiday from mid-March to mid-April 2009 and am considering a journey to Malaysia as I would like to explore it further.
Penang Island would be a great bike ride. I did it before in the late 80's but that was on a mountain bike. The west coast of the island is all hilly twisties.
I've also heard the east coast roads of the Malay penninsula are worthwhile.

Hopefully, my 2 week holidays in October 2009 will coincide with the Sepang MotoGP but they've moved it back a week from the 21st to the 25th.
Last October, I had to return to work on the 26th so had enough time to ride back. Problem is, I rarely know when my holidays will be until the last minute.
Next year I may either have to extend holidays or fly down either way, I'll be there.