I was to meet my riding partner in Battambang on March 8. We were to ride the dirt south from Battambang and thru the Cardamom's. I left Pattaya the day earlier, figuring I'd explore the Thai border area before crossing over into Cambo at Pailin. Having arrived at the border by 1pm, I decided check thru Thai and Khmer Immigration and just ride on to Battambang. A major mistake!

Thai - Ban Leam Immigration was not nearly as efficient as Immigration as my many experiences at Koh Kong. They seemingly weren't use to checking bikes out of Thailand.
First pix is the main Immigration building; across the street is where they processed the bike documents. All told it took about 1.5 hours!

Docs in order I now braved Khmer Immigration (Duang). First pix is of the main Immigration office, which sent me across the street to a shack for the Visa. 'Why are you going to Cambodia', they asked. Duh! Then they demanded I register my bike next door, at Customs, before issuing a Visa. I've _never_ had to reg a bike when entering Cambo! In Customs, none spoke and Thai or English. We verbally danced for 3/4-hour, then I showed them the picture of my friend (the main Officer at KKong/Khmer Immigration and said phone him, 'I don't need to reg my bike'. They relented, sending me back for the Visa, where I paid my $20-US and later clearance at the main office. Damn, it was now 5pm!

The road to Battambang was a miserable ride on the dirt road. Night fell and I was eating dust all the way to Battambang, behind Khmers who seldom drive with their lights on. Only about 20-km of the 110-km road has been paved and it took me nearly 3-hours completing the journey!

I stayed at the Bus Stop G/H (not recommended!) and met up with my friends and fellow rider the next day. John and I left, his GPS guided us the paved 20-km to the beginning of the dirt track south of Battambang.
Me on my Suzuki 250 Djebel and John riding his Suzuki DR650SE.

We rode to Pramaoy. There were some difficult areas on the single track,
but it was a fun ride. Later I crashed, trapping my boot under the bike. It
was not my only crash, just the most embarrassing one! I was on my back and unable to raise the bike, but 2-Khmers stopped to help. No harm, no foul! They took the pix of my plight.
We had maybe 15+ river and bridge crossing. 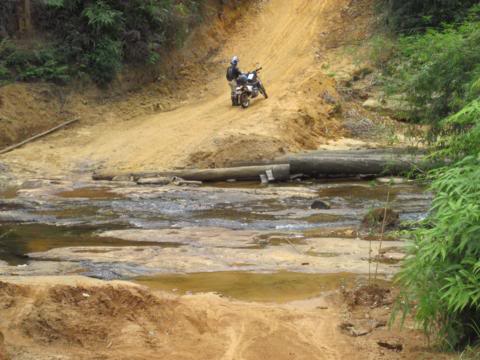 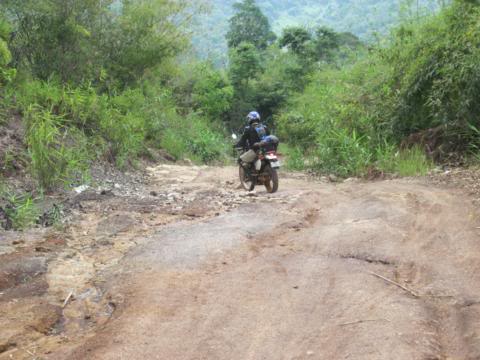 Mid afternoon we stopped in Pramaoy and got a room rather than continue to the smaller town of Osoam (sp?). We were concerned that the Osoam's G/H might be full, though we did carry gear for a night under the stars, if necessary. The Pramaoy hotel was nothing special! My shifter had suddenly loosened and I now had only 1st gear, so had a local remedy the problem. Fans are nice for drying wet socks from river crossings! On the downside, there was a Khmer wedding nearby...droning on with a blaring 100-dB of chants and music. It stopped when the towns electricity was shut off at 10pm, but again started again at 4am the next morning when they managed to find a generator! Arghhh!

Much to my dismay, the Cardamom track will soon become - the new Camry Hwy, all the way to Koh Kong! The Chinese, who are building a hydroelectric facility have widened the track to a 4-wheel trail and are soon to have bridges over the few remaining obstacles to automotive traffic. Just outside of a small village John's bike found what may be the only 5-penny _finishing nail_, outside of Phnem Penh. We had the needed tools, but it was easier to let the locals do the dirty work. A local had his special tire tools...two pieces of rebar with the ends flattened for removing the tire. Surely we had become the village topic of conversation for the next month.

But...not all cars make it:

The Cardamom's were a big disappointment, but I've since read there
are still other better track options in the area...Bill's thread on the Smuggler's Trail. (thx, Bill)

Arriving in Koh Kong we overnighted at the Asean Hotel. My room was
full of uninvited guests...and not the likeable kind. I must have
swatted a dozen mosquitos, including two blood laden ones which had
me for dinner. Days later I came down with Dengue fever, and now two
weeks later, I'm still feeling very weak from it! It's a nasty and
debilitating sickness!
The following morning, John had a GPS track that we thought would take
us, cross-country, from Koh Kong to Kampong Spueu. The wide track commenced 11.3-km from the start of Hwy-48, in Koh Kong, then promptly turned into a mass of tracks leading God knows where. The GPS always reported we were just adjacent but never on the correct trail. After 3-hours of futility, we turned back, taking Hwy-48 to Hwy-4 and south to Sihanoukville.

In Sihanoukville, I usually stay at The Boston Inn, which just down the
street from the original location of the Fisherman's Den. The place offers
the best value in Snooky (IMHO); having a double bed, HW, A/C, Refrig, and TV which also has the Pay-for-View channels (free). Not bad for $10/nite! My Dengue was now in full bloom, and I was took weak to do anything but sleep and watch the TV. Nicely, I did see the Pacquiao fight and F-1 races, live. 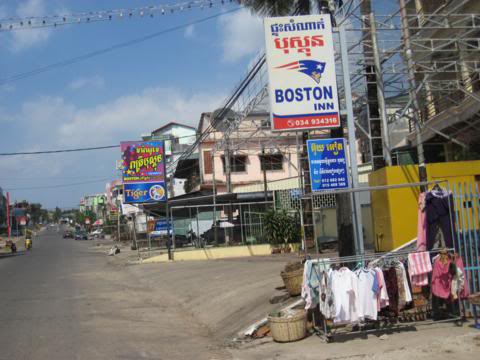 After a few days of weathering the Dengue, weak though I was, I needed
to head back to Pattaya. When arriving at Cham Yeam (Khmer Immigration), I found over 50-tourists/backpackers lined up seeking to exit Cambodia. No way was I going to wait..a Khmer approached me and said he'd have me stamped out in 5-minutes for $5-US. I said do it in 3-minutes and it's a deal. He did as promised and for the first ever time in 8-years crossing a Koh Kong, I'd happily paid a bribe to Khmer Immigration! Thai Immigrations was it's normal breeze; The bike was checked-in with Customs and I had a new entry visa and was on my way in less than 20-minutes!

Bert on the bike

Nice report. I am sorry to tell you however that also on the route 66 they have started to make it a camry highway.

Please see our trip report from February 2008. I do not know how it is now.

I am sure however that there are orther trails to ride.

Bert on the bike

CDrw
Nice one. Good to see you out riding & still enjoying yourself in the heat. Well done & thanks for the contribution.
D

last several months, some mates bugged in the mut on road 66... maybe i am late again to experience that.. wtf...

nice report.. i fell off 7 times while i did the cardamom mountain ride--mostly while stopping and waiting for my mates. i am only around 1.63m lolz

been missing that time already.
B

The Cardamom's were a big disappointment, but I've since read there
are still other better track options in the area...Bill's thread on the Smuggler's Trail.
Click to expand...

Koh Kong to Osoam in the wet season will still be difficult for those that want a challenge. It remains to be seen what road maintenance, if any, will be done now that the fibre optic cable is in.

I agree with Bill. Just went from Pramouy - Koh Kong on April 12th, height of the dry season. Looks like there may have been a bit of road washed away by the rain since your trip, as in some sections, I'm pretty sure a 4-wheel drive wouldn't make it - indeed we came across a Chinese guy's Hilux nose deep in a river. Give the rainy season a few months to do it's work and it will be plenty challenging enough. There are no road bridges yet, over any of the rivers, unless you count the old logs.
F

Jay, nice report and especially liking the foto with you under your bike !!! 555555555555
Fortunately nothing serious happened to you as obvious from your grin !!!! Keep 'em comin', cheers, Franz

When I did the Carrdomoms in December '09 that Camry road was just starting to be plowed but not yet graded. Somewhere in my GPS tracks I should be able to find the approximate point where you could still peel off the Camry road and onto the original singletrack trail. The original singletrack has been improved but at least its still fun for 40 KM's or so into Koh Kong.