The annual Yasothon Rocket Festival is on the weekend of 11-12 May. The Bikers make it their night for a party and last year about 150 bikes were there.
The town really “goes off” if you’ll pardon the pun and the main street is closed and has about 2km of wall to wall stages and loudspeakers set up trying to outblast each other. The brave public walk down the middle and have alternate ears impacted by the vibrations. The bikes also do a lap of honour down the main street getting drowned out by the boom boxes.
The climax of the event – apart from the party - is the setting off of the Grandaddy of all rockets to blast into the stratosphere endangering any orbiting satellites – look out Optus B3. The Bangkok Post wrote up a warning last week from the Aviation Dept warning all aircraft in the area operating below 10 000 ft to beware the Rockets.
Last years Grandaddy went horizontal for about 2km and caused mayhem before destroying somebody’s garage proving that the most endangered ones are those lighting the fuse.
A bunch of bikes and scooters from Sisaket will be going over.

Darn,,,only 60km from me,, and i cant be there, one has to go abck to manual labour on 11th,, any how, hope that u have a "Blast" there and pls post some"action" photos.
P

Well it went off at Yasothon about the same as last year. The Rocket Festival started on Friday night and finished Sunday night. The Bike Party was part of the celebrations on Friday night. Two groups went across from Sisaket, 6 bikes in each group. One group returned to Sisaket after the party at about 11pm and my group all with pillions stayed overnight. Again I was the only farung although there was an American from Ubon and a Welshman from Udon both with their Thai wives.

Sisaket Boys
Our weekend didn’t start out too well when about 5km out of town it started to pour. In typical fashion after we were wet we sought shelter under a big shop awning where the shop girls supplied free hot coffee, water and biscuits.(It wouldn’t happen to a bunch of bikies in Aus – unless for “insurance”) It’s just as well we stopped because it belted down for over an hour. When we got going again we dried out in about half an hour and that was the last rain we saw all weekend.
Again this year the stages were spread out almost wall to wall from one end of the main street to the other, about 2 Km. Each stage had its own sound system and dancers and singers and tried to outblast everybody else. At some points walking through the centre the noise was so strong that your chest cavity acted like an empty container and vibrated to the beat – no need for a pacemaker Even the Thai’s were blocking their ears.
The bikers area was at the Western end of town and had a huge stage area about 30mtr long and across the road on a vacant lot were the bikers tables. Free food, water and nibblies were provided by the Yasothon Bikers Club The bikes, about 150 of them, were parked on the road in the middle. 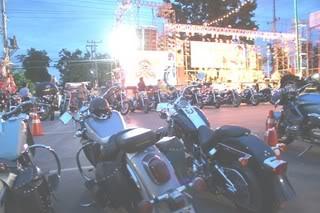 Bikes and Stage
There was all the usual exchanging colours with the hosts “Yasothon Rockets” and the dancing girls came on stage at about 11pm. I left at 1130 when it started to rain.

The trip back to Sisaket on Saturday was routine. They said there was a classic bike display or parade on Saturday but we didn’t wait around. All in all a good outing.
On Sunday I took a group over again in the pickup and the main street was back to normal but huge crowds gathered in the park to watch the rockets. There were the usual stalls and drinks and a bit of mud sliding and soaking in the klong. The big event rocket of the day took so long to get fired up after changing launch pads that we didn’t wait for it. I didn’t read about it in this mornings Post so it can’t have been all that spectacular.
Aviation in Isaan can rest easy now for another 12 months !
I've lost my camera but if I can get hold of any photos I will post them.
Here they are;