BMW F800GS Made in Thailand

Install the app
You are using an out of date browser. It may not display this or other websites correctly.
You should upgrade or use an alternative browser.
N

BMW started making the first model of BMW Motorrad's F800R in January and yesterday announced assembly of a second model, the F800GS

He said BMW planned to compete more aggressively in the Thai market, and local assembly could reduce the retail price by 30-40% compared with import motorcycles.

BMW Group Thailand expects double-digit growth in its motorcycle sales this year after the F800R is ready for delivery in July and the F800GS will be delivered in the next two months," Mr Pfalz said.

Pulled this from the F800R thread. The F800GS is a totally different animal, it's a perfect bike for Thailand, and, in general the one I would buy if I didn't have a red bike already

This is exciting!!!
N

Judging by the activity various on Thai rider channels, the F800GS will be a huge hit in Thailand. e.g. it's all over Facebook, Line, and I've just heard about 3 people having pre-ordered as soon as they heard. They'll sell shitloads of these.
F

Very good news Nick !! This year will still stick with DR650 and Tmax500 but already feeling that they will get too small for me soon, so F800GS or R would be an even better option than the V-Strom650. Most probably my only bike for years to come if nothing serious happens until early next year.
Amazing also on how the market has improved since let's say 5 years ago; now we do have a choice already !! Also do agree with your opinion about BMW becoming more and more innovative in recent years; a lot of attractive bikes not only with the S1000RR but also the Dual-purpose ones and not only giving attention to the "old men's bike" the R1200. Good times ahead !
Now if only BMW could pay more attention to their local dealership and its not so good reputation in biker circles, that would kick them forward another notch..........
Cheers, Franz
L

If I had the finances to have two big bikes, I would get a F800GS immediately.
Love that bike.

Was in a dealers in BKK yesterday looking at the 800R, very, very nice but comes with low seat as standard from Rayong factory.

They think the GS should deliver in next few months and at a price around 525k.

geoffnongkhai;300776 wrote: Was in a dealers in BKK yesterday looking at the 800R, very, very nice but comes with low seat as standard from Rayong factory.

They think the GS should deliver in next few months and at a price around 525k.
Click to expand...

Most Thai assembled/produced larger biked come with low seats. Same happened to the Multistrada. The original seat was VERY low. To low for a farang. Had to change it immediately. I expect the same will happen with the GS. Potential buyers should have a budget for another seat too. :shifty:

Yes in theory the F800GS would be an ideal bike for Thailand but suggest you try before you buy. I rented one (newish and in good condition) for a weeks tour of Slovenia and Croatia and it had nasty high frequency vibration - this plus low rpm snatchey fueling really detracted from the trip - no am not a smooth four cyl rider last bike was a VTR1000. When I returned home asked local Mottorad dealer about the vibes - bloke cheerfully said all the 800 do that and it kills the odd sale - this is supposed to be a modern engine with the extra con rod balancer rather than old school balancer shafts....... This was back in 2010 so BMW may have fixed it

I'm really hoping that Triumph will pull their finger out and bring their bikes inline with all these others....I am hoping the 800xc will be similarly priced as this f800.

Bit of a dilemma as I don't mind waiting but really want a touring bike by nov. Do I put a deposit on a f800 now and have it ready by nov or do I wait and see if the xc price drops? If it doesn't then order a f800 in nov I stand to miss the whole riding season.

For me the xc is the bike I would chose.

I was at German Auto today to check out the new 800GS. I have read and seen too many youtube videos of this bike and I wanted to see how it actually felt. I was expecting the bike to be low and yes, I felt it was way lower than the Versys and the V-storm. I am 178cms and I could easily rest both my feet in the floor. Seems smaller and lighter too. Comes with ABS and Traction Control. And guess what ? It comes with Heated Grips!

Only the Alpine white color was at display. Took a few pictures .. 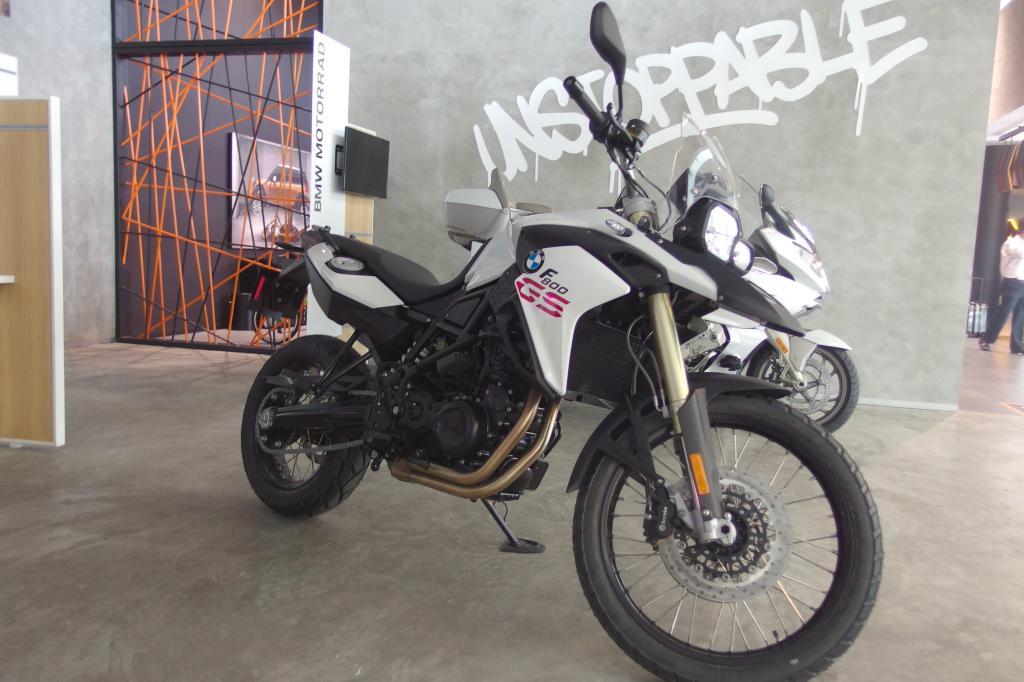 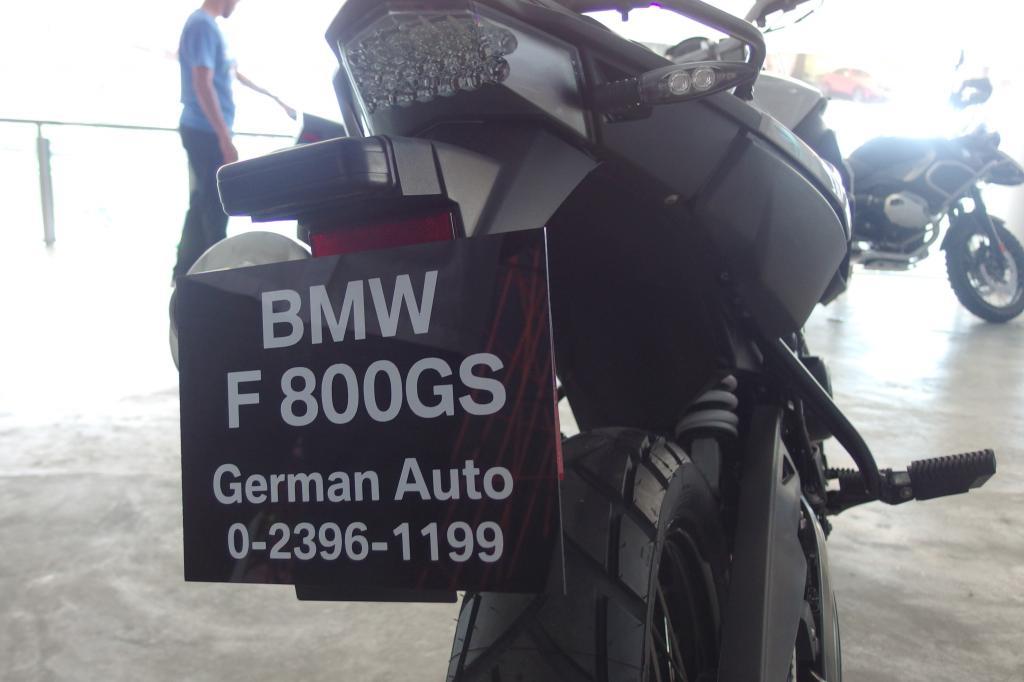 Spoke to the sales guy.. says its selling hot! and the queue is getting longer by the day. As of now delivery is by Oct. Price is 530k. Basic version with nothing much. BMW or Touratech (the sales guy can arrange) accessories can be ordered at the showroom. No news of the new 2015 colors yet.

Really excited with this bike. Not sure if I should wait to see reports of the first lot or book right away.

Yes. I reconfirmed twice with the Salesperson about Traction Control. Though the handlebar controls do seem confusing.

That's good news. Must be a relatively new addition as my 2010 bike did not have it.

Reckon the F800GS is just about perfect for adventure riding in Thailand and beyond! Not a bad deal at all for 530k Baht! :clap:

TonyBKK;301186 wrote: Reckon the F800GS is just about perfect for adventure riding in Thailand and beyond! Not a bad deal at all for 530k Baht! :clap:
Click to expand...

Your stamp of approval really counts for me - Thanks Tony.

I received a white one and have only done about 700Km so far but I really love this bike, the handling out of the box is great and a nice engine and John yes it has traction control as well as ABS.
I am now waiting on some Touratech and Moto Tech bits and talking to panda rider yesterday they have sold out on most items and awaiting the next shipment to arrive the end of this month!
Whoo Hoo, the riding season is just around the corner!

Which is the best BMW dealer in Bangkok to deal with for the F800GS?

From the three that I know of, Barcelona, is the one you hear most complaints about, from Thais too. If you are looking for a dealer that sells BMW cars, bikes and Minis, that leaves German Auto. I've visited a few times, they are helpful. Last visited in October, told 4 month waiting list on this model there.

For Motorrad only, it's BKK Motorcycle Co. Have no opinion on this company.
N

Saw one in person recently - it's a beautiful bike, looks better than in the pics. Also looked very low, so I suppose they sell the lowered version standard in Thailand? Maybe I remember it wrong but it seemed like the F800 used to be really tall...

nikster;303098 wrote: Saw one in person recently - it's a beautiful bike, looks better than in the pics. Also looked very low, so I suppose they sell the lowered version standard in Thailand? Maybe I remember it wrong but it seemed like the F800 used to be really tall...
Click to expand...

Yes, unfortunately the bike has lowered suspension and the low seat as standard for the local market.