Install the app
You are using an out of date browser. It may not display this or other websites correctly.
You should upgrade or use an alternative browser.
R

We had a call from the famliy in that area last night sounds like the White Wat was damaged in this. Some house were destroyed in their village others only minor damage

An earthquake measuring a reported 6.0 on the Richter scale occurred on Monday, May 5 at 6:08 p.m. The epicenter was located about 5 miles south of Mae Lao, and 16 miles southwest of Chiang Rai in northern Thailand. There are reports of recurring aftershocks, damage to roads and buildings in the vicinity, and some injuries. Some roads may be impassable or have undetermined safety hazards. You should exercise caution while driving or entering structures, particularly in Chiang Rai Province. U.S. citizens should advise the U.S. Consulate Chiang Mai of any reports of injury to U.S. citizens. Go to http://www.ready.gov/earthquakes for more information on earthquake preparedness and response.

Sounds like you guys were rocking and rolling up north yesterday! Fortunately it seems there have been no deaths or injuries?

Some pics of the damage- 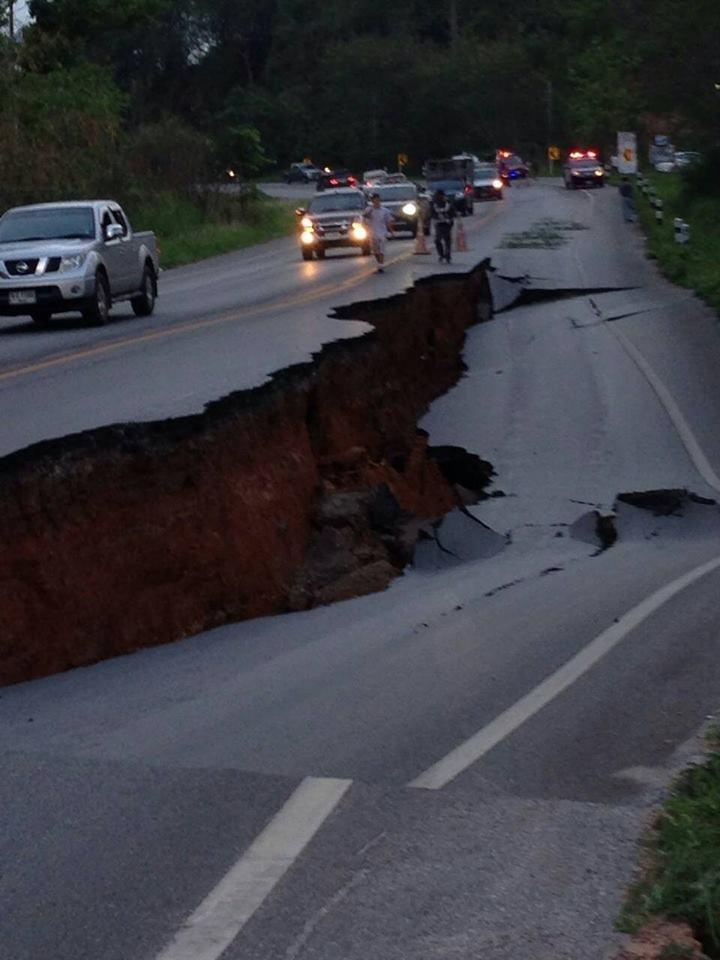 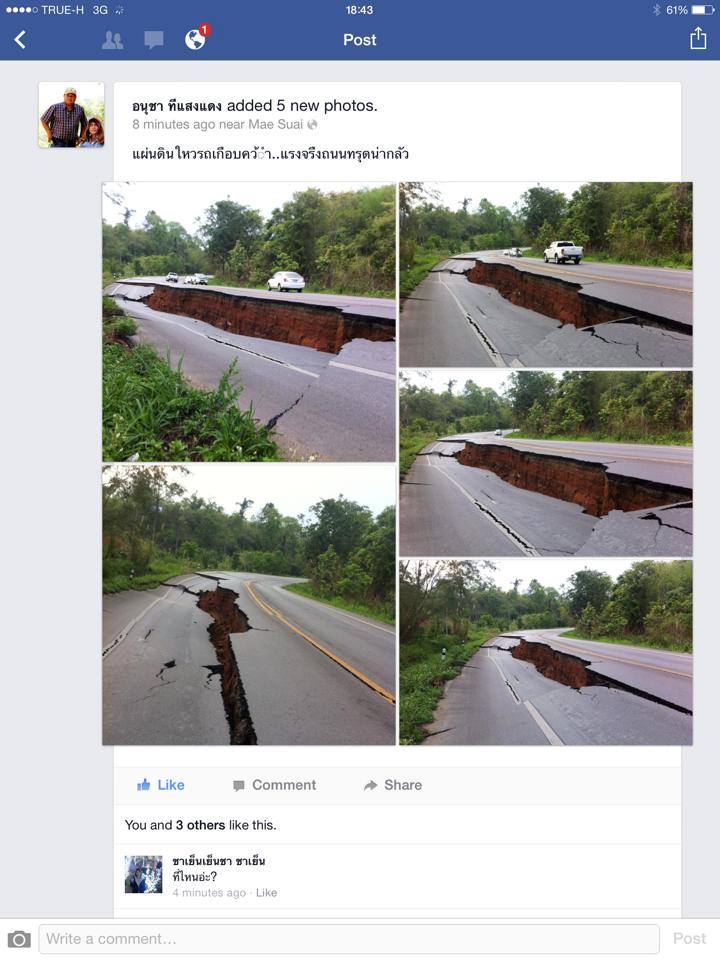 Sadly there are reports that the Wat Rong Khun has been damaged beyond repair... 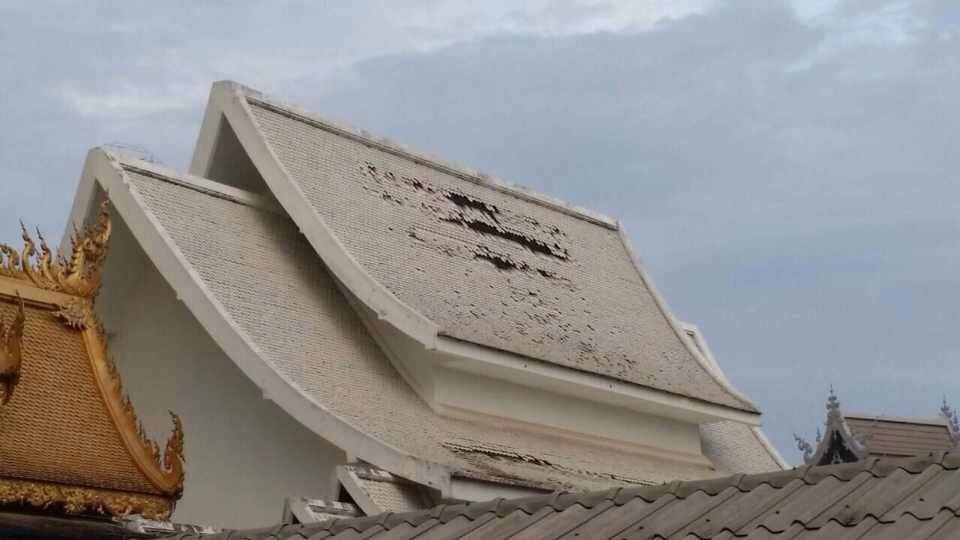 Not sure the location of this damaged Buddha...

Hope no one was home when this house tipped over...

Panic at the BigC caught on video-

And another shot from Chiang Rai Circuit- 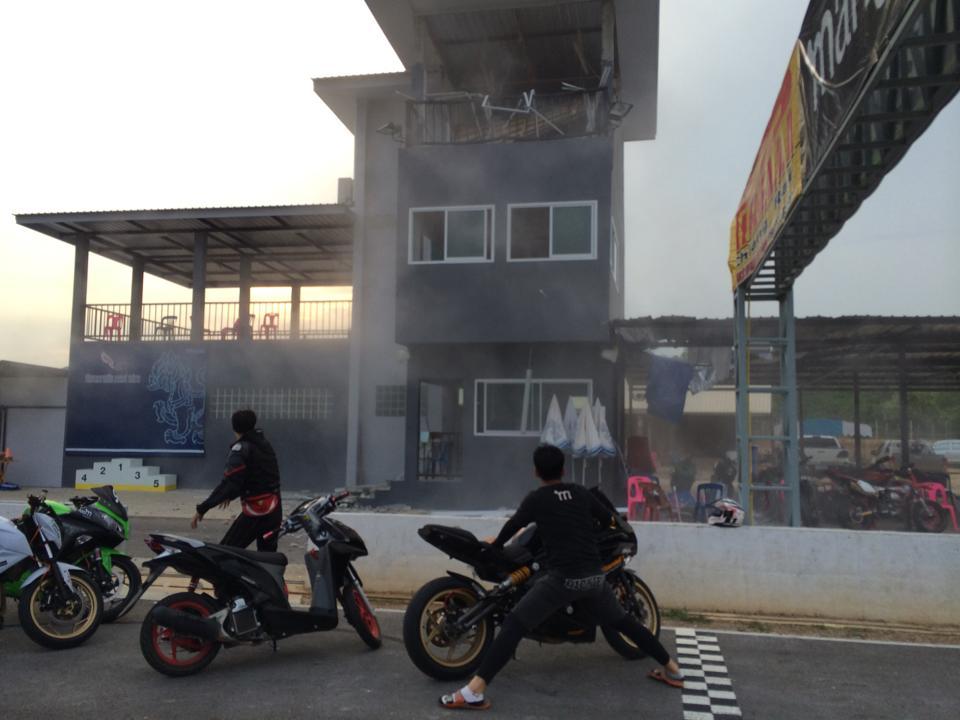 Thanks Ray and Tony for the info and photos.

Those cracks in the road would certainty swallow you up bike and all.

A quick inspection after a blast to Nan to meet up with Harri the Finn & check out some Tai Lue temples in Pua.

The area that seemed to take the biggest hit was Tambon Dong Ma Da.
I checked out possibly the most spectacular one in Huai San Yao just off R118. 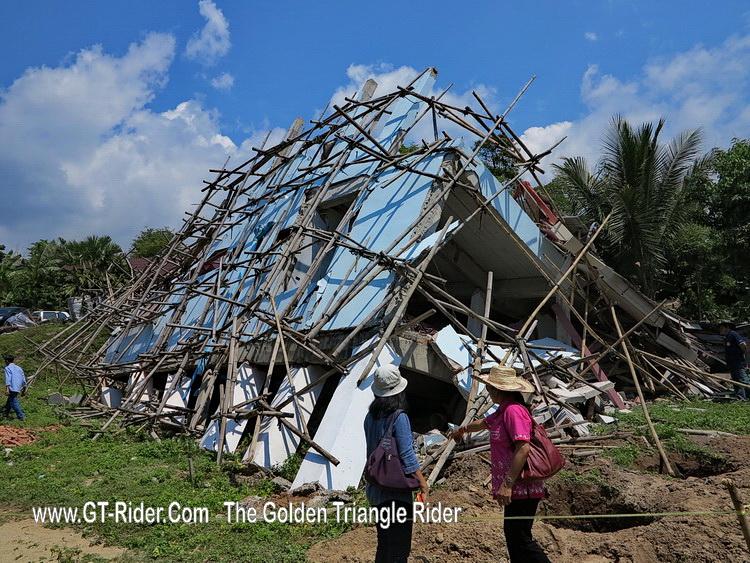 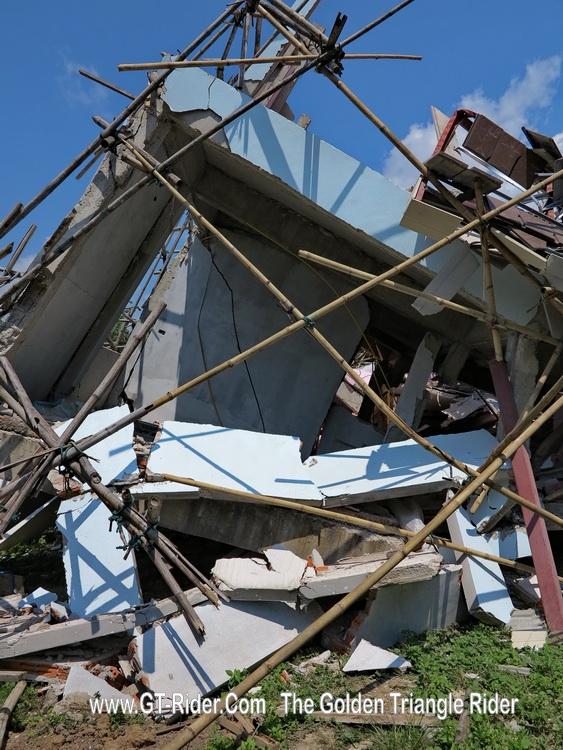 From what I understand a single female owner, 6 months pregnant - I saw her - & still with a bank loan of 2.7 million baht to repay & no insurance.
On the positive side she has a secure job with the government.

The houses around all seemed intact & after inspecting the building & construction you can only assume it was a very dodgy builder. 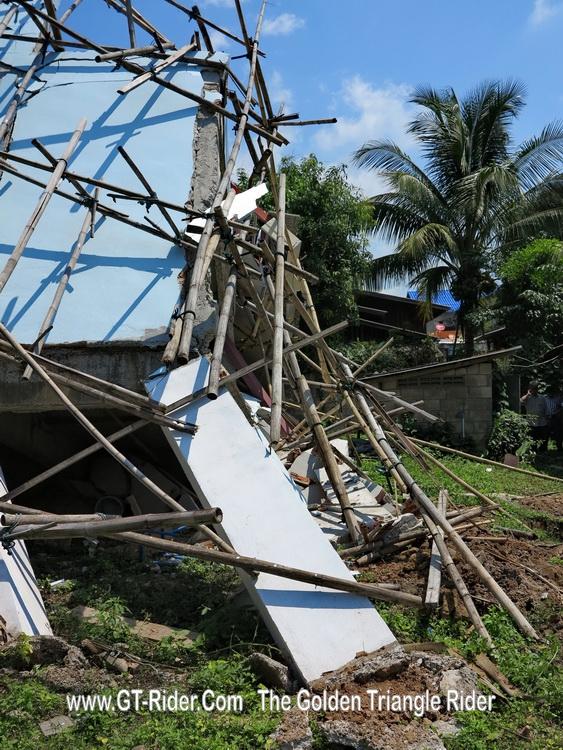 Check out the fake fat pillars

Very sad indeed. I visited the site with a team of Tambon officials & the house owner was one of their work colleagues.
Everyone one of the team donated personal money & supplies to the house owner.
They did this at three houses visited & their "nam jai" compassion was truly moving.
One of the many reasons why I have lived here so happily for so long long.
Three big cheers for Thai people - you really rock with your "nam jai."

There are other damaged houses in the area, but probably none as spectacular as this one.

Earthquake epicentre found to be in Mae Lao

The Department of Mineral Resources yesterday changed the epicentre of Monday's 6.3-magnitude earthquake in the North from Chiang Rai's Phan district to Mae Lao district.

This relocation of the epicentre comes after the department's team of experts surveyed the affected area over the past two days and found new evidence indicating that the epicentre was located in Mae Lao district's tambon Dong Ma Da.

Previously, the Thai Meteorological Department said the epicentre was in Phan district's tambon Sai Khao, though four days later the Department of Mineral Resources' team realised it was actually 20 kilometres away.

Plus, this tambon is close to the Phayao active fault.

"Finding a new location of the epicentre has prompted us to renew the estimation of damages caused by the earthquake," he said.

Since the frequency and strength of the aftershocks had decreased, people whose houses had only been slightly damaged could return home.

However, people whose homes had been badly damaged should stay away, he advised.

At 3am yesterday, a 4-magnitude aftershock was felt in the area, though he said his team did not detect any activity in the Phayao fault.

Meanwhile, the Engineering Institute of Thailand found that at least 20 houses in tambon Dong Ma Da had been demolished by the earthquake.

Assoc Prof Penneung Warnit-chai, an earthquake expert at the Asian Institute of Technology, who was also part of the inspection team, said the damage incurred was low when compared with similar earthquakes in other countries. He added that the buildings that crumbled were built using soft materials.

However, he voiced concern about what might happen in Bangkok if there are any strong earthquakes nearby.

According to a study, he said about 10 of 1,400 buildings that are 20 to 30 storeys high could be at risk of collapsing in the capital.
Click to expand...

Where the 30 year old Buddha statue lost his head. 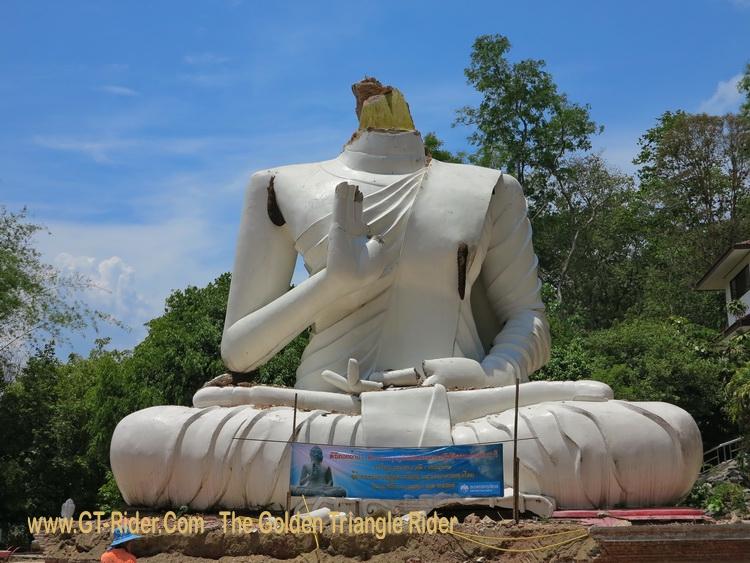 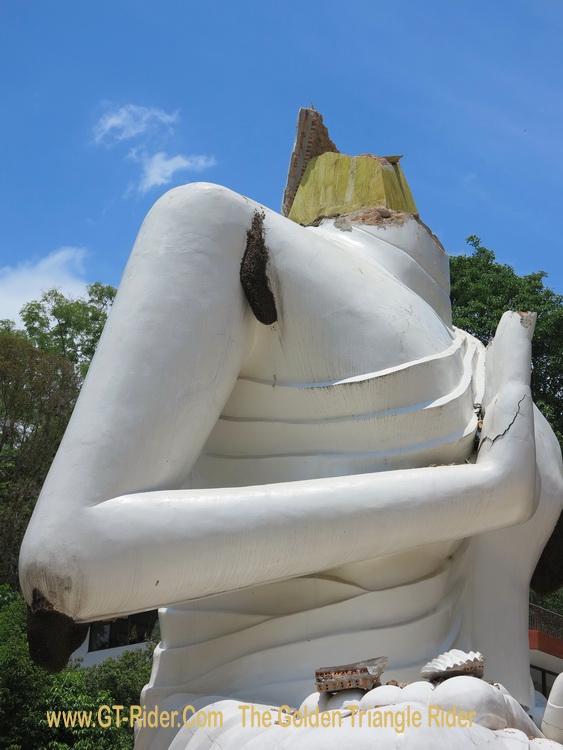 There was a thamboon ceremony scheduled for the temple on Friday 9th May 2014.
This had been previously scheduled much earlier & was to continue as scheduled, but perhaps now with special significance.
The abbot said that after Friday's ceremony that on Saturday 10th May the remaining Buddha image would be knocked down & they would simply start again.....life goes on.

That great action shot at the time 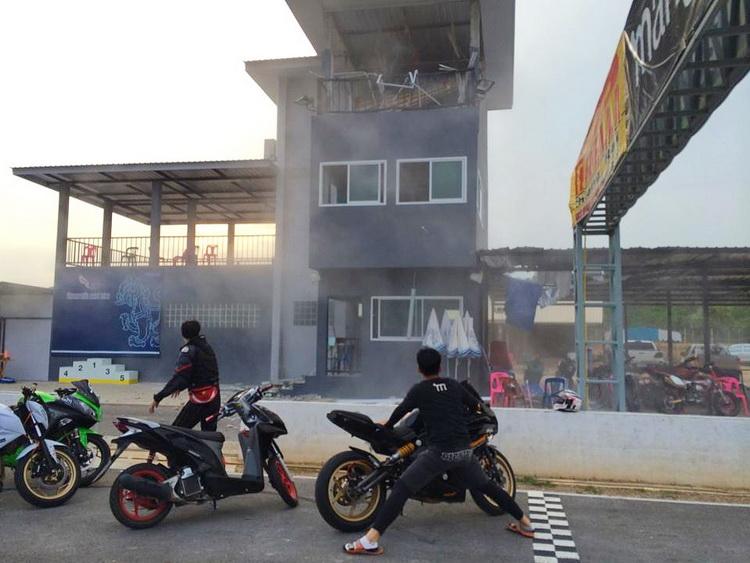 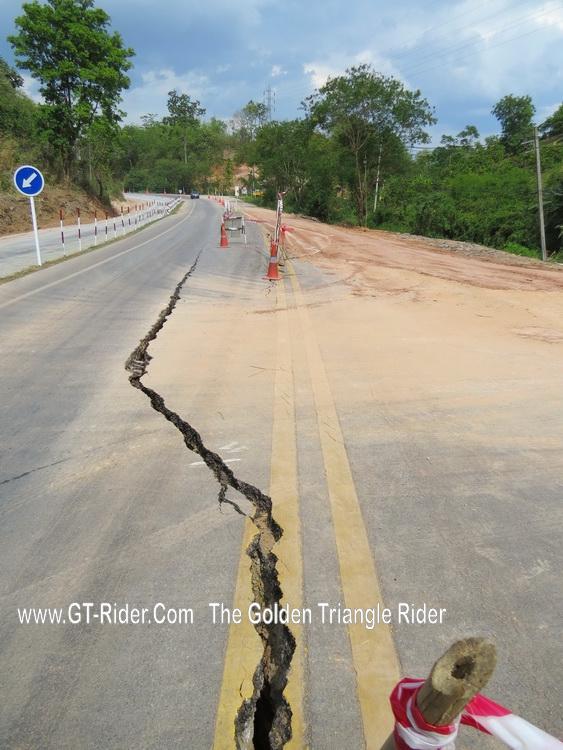 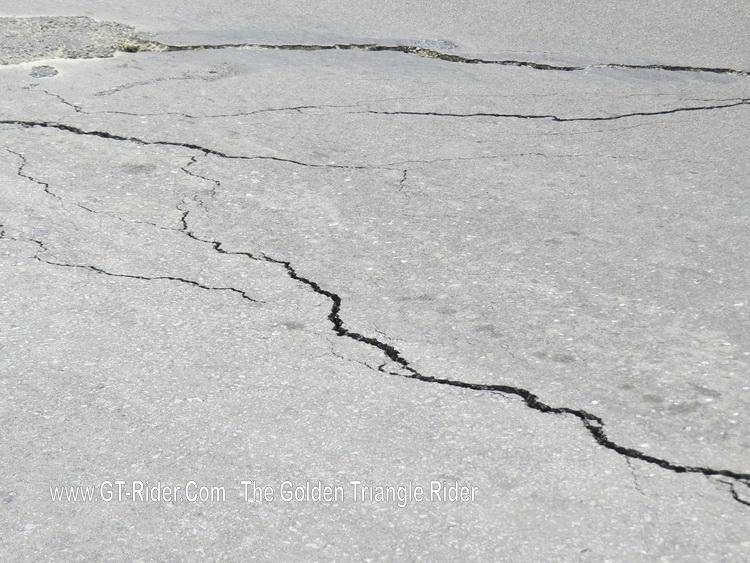 The highways department seems to be quick on the job & soon it will be back to normal.
Power on guys. Enjoy life while you can - it is very good here in Thailand.

Great Report David! Impressive Clean Up. Makes Me hope We never get Hit with a Similar Strength Quake at Our Own Homes! How well constructed are they? If You happened to be inside one of those Collapsing Buildings it wouldn't be very Nice to say the least!!!
You must log in or register to reply here.
Share:
Facebook Twitter Reddit Pinterest Tumblr WhatsApp Email Share Link
Top Bottom