OK Sunday, so a good look around the market just behind our Hotel. We wander at random taking in the sights and smells,

and breakfast is a selection on tidbits straight from the Woks.

Nobody seemed to need a Buffalo or a quilted quilt, so we are off to Meo Vac.

Funnily enough, it is market day there as well.

And if we were not marketed out, we stop at Khau Vai, you guessed it, another Market. We missed the ‘Love Market’ (it’s in March) which is a unique event. It has been going on for longer than the oldest resident can remember, and it goes something like this...

‘Khau Vai is not similar to the simple market today. It origins from a legend about a mournful love story of a couple in ethnic minorities. As told by the legend for immemorial times, there was a boy and a girl of two different tribes who fell in love with each other. The girl was very beautiful and her tribe didn't want her get married with the boy of another tribe, on the contrary, his tribe wanted her to become the bride of his tribe. This resulted in the conflict between the two tribes which aggravated as the youth loved each other more and more. Until one day, when the two met each other on a mountain slope farm, they saw their tribes fighting fiercely down the mountain foot. They understood their love was the reason of the fight and to avoid further blood and flesh fly they painfully decided to split up and promised to meet once a year on the same day at the same place (26 march of lunar calendar). Since then, Khau Vai became the common place of all the lovers in the area.’
Khau Vai is not only an appointment place of wedded pairs with their missing love, but also a traditional night market of Mong ethnic minority.

Nowadays, Khau Vai love Market has become an appointment market, for all people seeking love (from the youth to the person who get married). It is also a place of sharing feelings and understanding about each other of the young girls and boys in ethnic groups in Meo Vac district and surrounding areas.

Some might dismiss the lovers’ rendezvous that happen in Khau Vai as short flings, but in reality things are very different. The villagers view it as a time to go down memory lane, cherishing happier moments of their past. Lau Minh Pao, for instance, gets to meet his old flame and talk to her once a year. “In the past, we were lovers, but we couldn’t get married because we were far apart,” says Pao. “Now we pour our hearts out about the time when we were in love. We meet together to re-tell the tale of how it was when we were in love back then.” Pao’s wife has no problems with this, as she is off meeting her ex-lover at the very same time. This is a typical scenario for most people of these hills. Over time, however, the tradition has taken on a more modern feel. The young plan dates via text messages and take pictures on their mobiles. The village itself is more accessible because of new roads. 23-year-old Hua Thi Nghi, an ethnic Giay, says “The young generation now go out together and find each other, and it’s more modern, freer and clearer. Back in the old days, our grandparents had to pursue love in secret, not like today.”

But just in case you thought today was all about the shopping, we get to tackle Ma Pi Leng Pass……..

Ma Pi Leng Pass in Ha Giang province is some 20 kilometers long and cut into the side of Ma Pi Leng, a mountain around 2.000 meters high. The pass is part of 'Happiness' road connecting Ha Giang, Dong Van and Meo Vac town. Ma Pi Leng pass was built by the H'mong, and started in the 1960’s. Ma Pi Leng Pass is not long but it is the most dangerous pass in the northern border mountain area and is considered as the “King” of the Vietnam’s pass’s or Great Wall of Vietnam or the Pyramid of the Meo. At the top of Ma Pi Leng mount on the “Happiness” road is a stone stele recording the marks in the construction process.

On November 16th 2009, the Ministry of Culture, Sport and tourism of Vietnam classified Ma Pi Leng area as scenic relic of country. Ma Pi Leng pass is considered the unique regional heritage for landscape and geomorphology; the pass peak area is considered as one of the most beautiful viewpoints to enjoy the panoramic scenery in Vietnam, and in the valley, Nho Que River is one of the most unique tectonic valley’s in Vietnam.

This area is also known as ‘The Final Frontier’ in Vietnam, with tourism in it’s infancy here. You need permits to travel through here and is Wayyyy off the tourist track. Happiness Road, our guide Minh says that the road got it’s name because the Hmong people were happy to finish it. The story goes that the workers used ropes to attach themselves to the mountain while they were cutting out the road.

We stop a couple of more times to distribute the remainder of our goodies and have a lot of fun teaching the kids how to throw frisbees. We had thought of bringing some Boomerangs along, but were concerned by the carnage they might produce.

Still got off the beaten track here and there

All of our Hotels are quite nice, around a 3 star rating, hard beds in the Asian style but giving good support for the aching muscles every night, western ensuites with wet bathrooms, but electric &#699;on-demand&#700; hot water systems. Our Hotel tonight is without power as the main power pole outside is being relocated, but we all have our torches, with the &#699;head-band&#700; type proving really useful. They leave our hands free as we unpack and in the bathroom, but it is cold showers. The Hotel supplies candles and “It doesn&#700;t matter, it&#700;s an adventure” so time is spent on balconies polishing off the remainder of the duty free, and watching the village go about it&#700;s business in darkness. Power comes back later in the evening, so hot showers in the morning.

Tonight is at the Song Gam Hotel in Bao Lac.

This photo actually belonged yesterday, but it is a ggod one...

Breakfast is sourced by our guide, Minh, and consists of fresh bread rolls filled with stuff. Didn’t ask what, but they were very tasty. The bread has been very good, but we are missing proper coffee.

Very scenic day today as we wind our way on relatively easy roads around and along the mountain passes and end up in a home stay on the shores of Ba Be (Three Bays) lake.

Managed to give away the last of our goodies

And where there is water, you get crossings to play in

These boots are only waterproof if the water isn’t deeper than your knees. Had to walk through a few times to bring the girl's bikes through.

There was the occasional bridge though

Actually a series of 3 lakes with an interesting story of one particular island. The area is a UNESCO World Heritage site and covers an area of around 100 square kilometers.

‘A tiny islet in the middle of Ba Be Lake is the source of a local legend.The Tay people believe that what is a lake today was once farmland, and in the middle was a village called Nam Mau.

One day, Nam Mau residents found a Buffalo wandering in the nearby forest. They caught it, butchered it and shared the meat, however they didn’t share any with a certain lonely old widow. Unfortunately for the villagers, this wasn’t just any old Buffalo, it belonged to the River Ghost. When the Buffalo failed to return home, the Ghost went to the village disguised as a beggar. He asked the villagers for something to eat, but they refused to share their buffalo meat, and ran the beggar off. Only the Widow was kind to him and gave him some food and a place to stay for the night. You can see the ending coming here, can’t you.....

That night, the beggar told the widow to take some rice husks and sprinkle then on the ground around her house. Later in the evening, it started to rain and a flood came. It’s getting exciting now.....

Guess what, all the villagers drowned and the flood washed away their homes and farms, thus creating the Ba Be lakes. Only the Widow’s house remained, OK, so it was predictable, but still a good story.

We arrive just early afternoon and that gives us time to do a 2 hour boat ride along the lake. Haze again spoils the photos.

Tonight at Mr Dang’s house, one of the many home stays in the predominately Tay village. His family provides dinner and towards the end we are treated to wonderful banana crepes and his own home made wine. Wow, so smooth, but such a kick.

Biggest day on the bikes, but mostly through low level farmland on good quality roads.

The last 30 odd kilometers are just a shambles with traffic everywhere and it really is just a matter of survival. Our newly learnt off road skills are put to use time and time again by taking to the dirt to get around traffic.

All you have to dodge off the side is scooters, pushbikes and pushcarts, people and animals, but we are used to that now.

Back in Hanoi late afternoon, and really excited and relieved that we have done it. There are a few bruises, but no one got lost, no one needed more than basic first aid, and we have been so far outside our comfort zone we can&#700;t even see it anymore.

Back to the Gia Tinh hotel for 2 nights, the Wednesday is spent exploring the War museum and the markets for bike bits, shopping malls for the girls 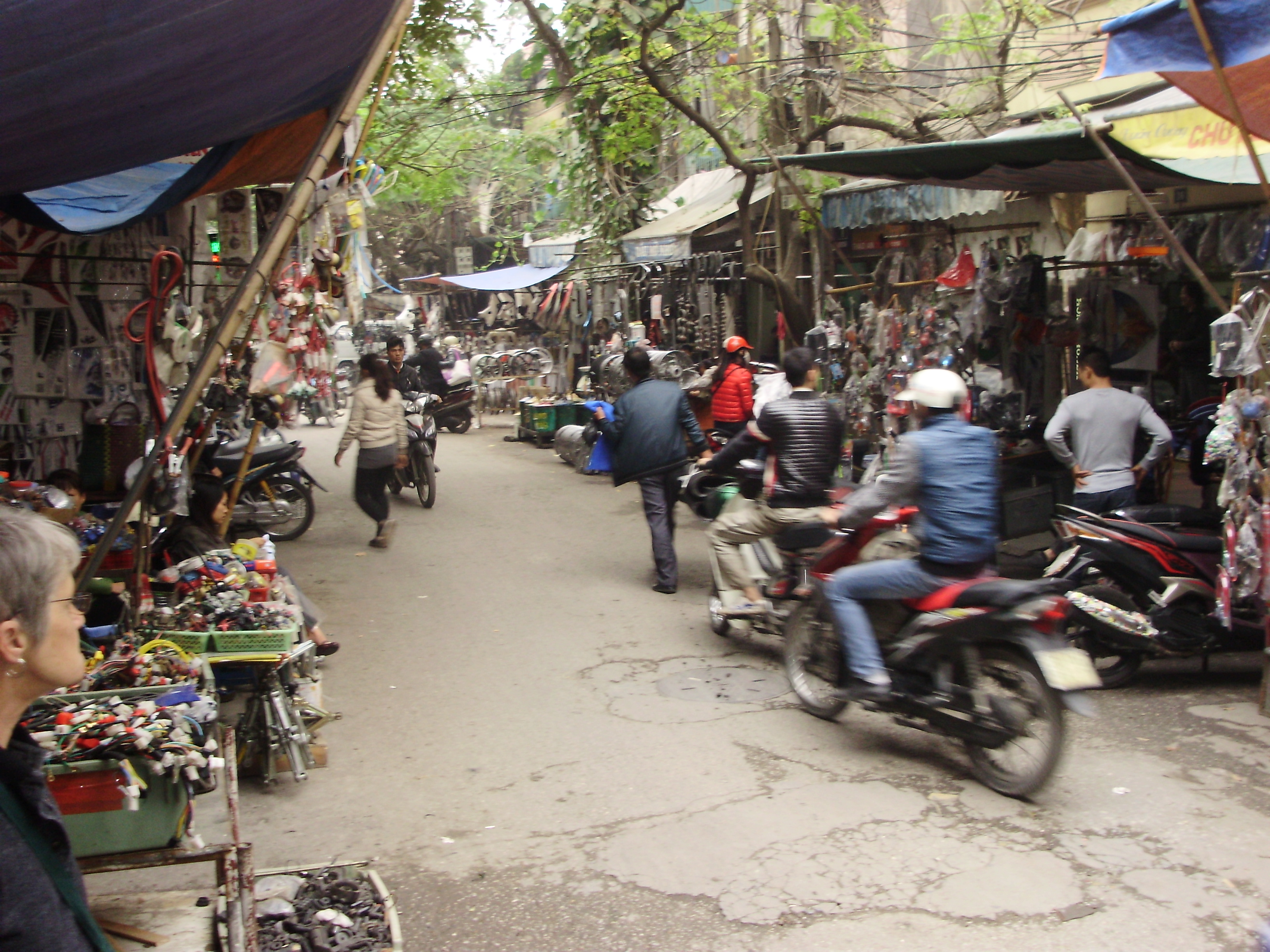 Got a few thousand hours flying these in Australia and England.

The Water Puppet show rounds off the day nicely.

and a tourist drive around the lake in the evening. 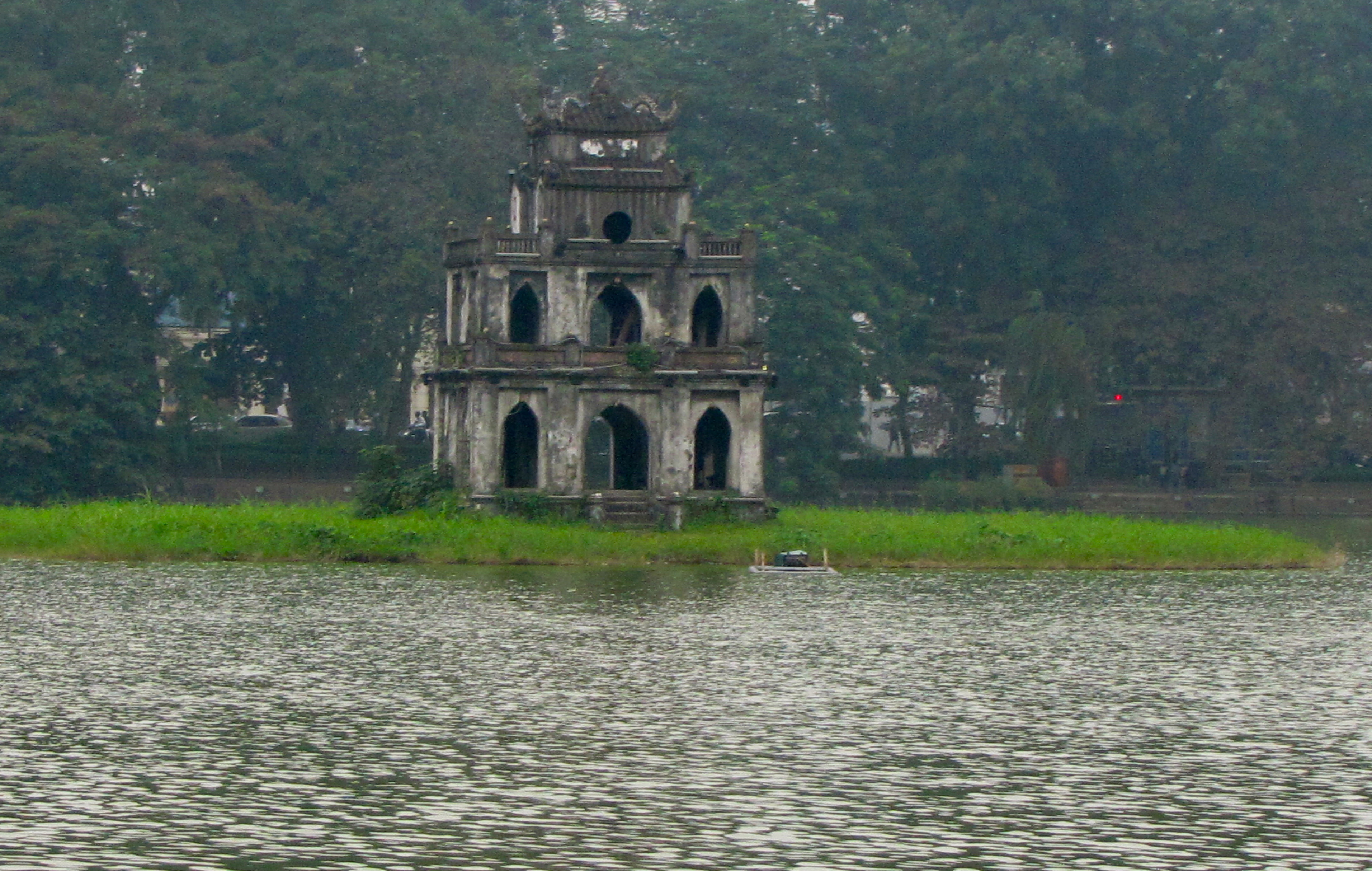 And finally a big Thank You to Flamingo Travel for the organizing, Crazy Minh our guide, and to his wife and baby girl for letting him come away.

Thursday is spent doing more of the same, and a late flight out back to Melbourne via Bangkok transit.

What an adventure, what a rush, what a ride!

Terrific report Deano. You guys clearly had a hell of a time but this quote from your report does seem to sum up motorcycling in Vietnam! The last 30 K's into Hanoi sounds horrendous.

Thanks for the report. Flamingo has an office in Saigon, too. Wouldn't you want to go South?

Sorry I missed this one. A little beauty it is too.

It just goes to confirm that there are some awesome roads & markets to explore in North Vietnam.

I loved these two pics as well

make you want to go & ride there.

Thanks for the write up.