Snowed under & was hoping for some other riders to get the ball rolling as promised, but.....ZILCH

So just a few snaps to get it started. 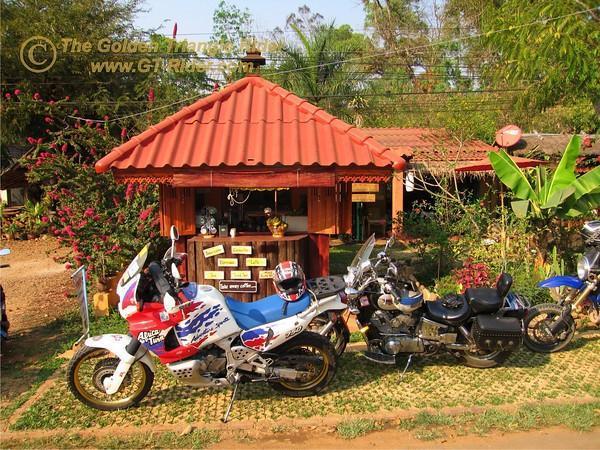 Dare I say it - the best cappuccinos between Chiang Mai & Mae Hong Son. As a regular "drop by-er" I don't even need to order the 2nd cuppa anymore either.

The troops clearing the grounds for the night's festivities

Despite the seeming mass dis-organization I actually think everyone knew what, when & where to perform their tasks. 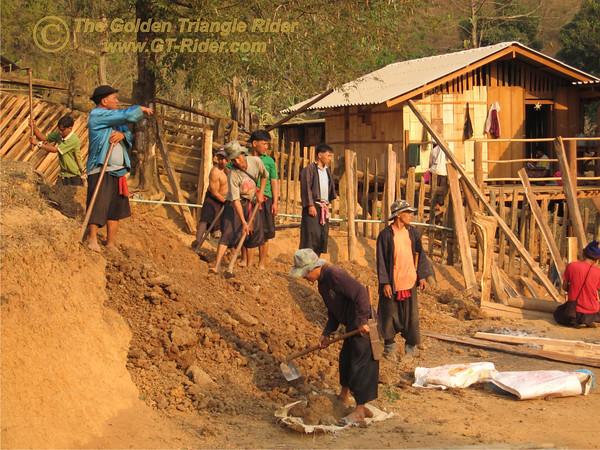 Yours truly & friends, overseeing the preparations

The show got underway

But generally everyone was happy (& so you should be at New Year.)

It's always fun & a priviledge to be able to join in these tribal new year celebrations.
So the next day it was time to "pay our way" with donations of school supplies, sporting gear, clothes & goodies for the villagers.

Sean loaded up with footballs for the school

The SEO guy with badminton sets

The GT Rider with a box of clothes donated by Ed from Surathani.

Thank you once again Ed. You did the same last year & your support is well appreciated, especially by the villagers.

of note here was that the cakes of soap were a winner. We ran out, bought all the stock from the local store & they still wanted more soap! So if you're visiting hill tribe villagers & want to help out with the local hygiene, give 'em soap!

No worries about bird flu here with his favourite pet

Then back to the Soppong River Inn for "a snack." The SEO guy thought he was onto a winner - a table of food & a bottle whisky all to himself.

But it was all too good to be true.

Once again the food & service from Joy & Om at the Soppong River Inn was first class. Thank you very very big Joy & Om.

Time for one last show at Luk Khao Larm

I had a great time. Thank you
Moto-Rex
Pee
Chiangmairich
SEO Guy
Sean

Plus Joy & Om at the fantastic Soppong River Inn
http://www.soppong.com/

David's knowledge & experience in the area made this trip very enjoyable. Thanks a lot for sharing this with us and organizing this ride.
For me there is too much smoke in the air now in North Lanna. I just got back to Bangkok last night after hitting my first storm of the year in Phitsanulok and Nakhon Sawan.

David's text and pictures cover the event. I just add my bits...

There was an interesting cocktail of bike styles on this trip: from Honda AT and Shadow to Kawasaki trail and street bike, not to mention my Suzuki SuperMoto:

I was impressed with the villagers tight schedule: they only started to prepare the dancing/ceremonial ground in the afternoon:

... while some seem dubious

In the meantime the ice cream dealer was doing good business

Anyway no need to be dubious; construction task was completed in time and New Year dancing proceeded in the evening as scheduled

And distribution followed in an orderly manner

... while some can't help but looking dubious...

There were definitely some great faces in this village

Note that Ben (aka SEO Guy) was persistent during the all trip. He proudly wore a New Zealand Rugby shirt instead of the GT Rider shirt favored by the Australian guys who were in the majority. Anyway no incident occurred. Ben obviously knows how to secure immunity. That's another story anyway.
Cheers

The expedition was a little unusual in that the 6 of us met up in Pai at lunch time - I came via Fang, Rex via Wat Chan, and David, Sean and Richard direct from the Kafe in CNX. After a leisurely lunchtime rendevous, we rode the short 50kms to Soppong together, and made a few excursions out to Ban Luk Khao Larm over the next 2 days. The return was the same disorderly process - I headed to Mae Sarieng alone because I thought David was riding to Mae Hong Son with Richard. A last minute change of plan and Richard went back with Eric and Rex via Wat Chan, Sean never woke up before the team departed, and David ended up riding to MHS alone because the Shadow was uncatchable with a few minutes head start...

Whenever I go out on expeditions and get the camera out, I'm always captivated by the children - I've got a few daughters - ranging in age from 34 to 10 years old - and quite a few grandchildren back in NZ... Here's my favourite shots of the kids from Ban Luk Khao Larm.

As for the wee dig about the black NZ rugby shirt... :shock: all that did was prompt me to change my name on Gt Rider! Rex referred to me as the Kiwi Cruiser a while ago, seemed fair enough. :lol: