A bit of a brownie points trip for me with Meow aka Happy-go-lucky. Its been awhile since she could get satisfactory time off work for us to go away & do something constructive together.

HGL with her new car

a Ford Fiesta, for those who maybe interested. Note too that I'd rather be on the bike, but as I'm off to Laos this was an excellent brownie points trip.

True to form I / we were late arriving in Thoed Thai around 7.15PM. Dinner was underway at the Ting Ting, next door to the Rim Taan Guesthouse.

it was good to see so many guys there, especially with their "better halves."

Meow made up for our late arrival by immediately jumping into the kitchen to make somtam for the gals.

don't you just love this country, being able to do that.

Being way up-country in one of the more remote out of the way places populated by various ethnic people there were some real interesting characters around. This is one of the reasons why I like Thoed Thai so much & it has a real wild west feeling to it. I just love sitting around observing the many different people out & about for the New Year & Fair. :thumbup:

The Toy gun stand was big with the kids

BIngo it was for others

BIson? type hats were also popular with the kids.

1st night down & the morning after residue.

a fairground littered with plastic bags. But by 10AM they were all gone. :clap:

It was a busy time & cold: the festival staff got to sleep on stage in their tents.

The main parade was scheduled for 5PM so with a bit of time to kill TT sightseeing was the order of the day.
1. Khun Sa, the late opium warlord's HQs.

I've obviously been here too long & am amazed that some newcomers don't know about Khun Sa - the man who gave the Golden Triangle it's name.
Check out
http://www.doi-mae-salong.com/thoed-tha ... um-warlord
for a brief bio f Khun Sa.
And
prince-of-death-road-trip-khun-sa-memorial-t3096.html

The parade started from the same place as last year, but seemed much later & with less participants.
It is still very folksy & colourful, allowing you to get right in there & take photos. :thumbup:

well it was New Year. :thumbup:

Red Lahu, that is.

The start was delayed, true to form, & not everyone was amused

it eventually got underway, & they took off like a rocket. Making up for lost time I guess & to appease government officials waiting at the official opening site. It was therefore a bit of frantic snap as the sped by effort thereafter.

The Akha, & the reason for the delayed start

I'm sure some of you other guys have good photos of various characters & events - please don't be shy - stick 'em up.
Last edited: Jan 6, 2021

Well it was indeed a fun weekend with plenty of festivities, colour and something for everyone, with all the local folk and the few visitors having a great time of it all

and the ferris wheel must be the oldest one in existence

With all this frivolity, a bloke needs a feed an a few beers

followed by a bit of a sing song

as they all marched up the one street town

interspersed by a few ring-ins from Chiang Mai

and following up at the back of the parade, some carnival groupies

perhaps as a result of what was coming down the road towards them. Such friendly folk

As darkness fell, out came the lanterns

and everyone got in on the act

but at the stroke of midnight, all hell broke loose as the fireworks went off all around and in amongst the crowds

The morning brought the odd hangover here and there

but all in all a great event, right up until the end

Really good photos - thanks to you both. Looks a real fun event & while I would like to go, I am somewhat reluctant due to the state of my leg. If much walking or standing around was involved I'd just be a complete embarrassment! So for the time being, I'll make do with these photos & reports! :thumbup:

And the "find" of the trip was the Saraburi Restaurant & Karaoke.

good food, not that you can see any on the table above (yet.)

Madam Meow was a star both singing & organising the Kom Lois for flying high..

At the fair ground

The midnight countdown & fireworks show was incredible & one of the most bizarre wild experiences I have had in 30 years in Thailand.

they literally let the massive fireworks off right in amongst the crowd!

And yes Ron is correct that his minimal hair was on fire / singed! Amazing Thoed Thai.

You could not but help smile & enjoy yourself

Madam Meow aka Happy Go Lucky & I retreated home via Doi Mae Salong, & whilst imbibing at Sweet Mae Salong I suggested Meow take a look at the Osman House rooms opposite for consideration on next trip.

Meow was suitably impressed & that was it: night # 3 on the road.

I sauntered off downtown & caught sports day at the local school, complete with a youthful cheer squad. 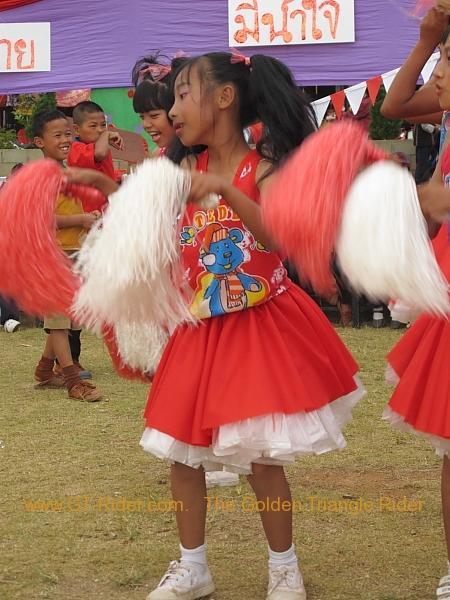 LAUGH. I noted that not surprisingly, considering the current state of Thai politics, the opposing cheer squad across the field were all yellow.

What a load of

a silly sausage on R1089 on the way home. Santisuk is the village.

I just love these people, they have such a style and presence.

No stage fright among the Ahka.

These small town festivals are a great to see how the locals celebrate and have a good time.
This was one of the best weekends I’ve had in Thailand, and unlike other New Years Party’s I’ve been to in the past. You don’t get locked up for having a few beers and walking around with a balloon with a dumb look on your face.

Wow...some really nice pictures of the area, the individual groups parading, and those of us fortunate enough to gone an have wonderful experience.

Here's a few shots of all of those in the parade gathered together at Festival area at the end of the march. There were actually 1000's in the parade, but such large numbers weren't readily apparent while watching the individual groups march by. These pix were taken at the Festival area from a tall light stand...until I fell off!!

The main parade is late afternoon on Friday 25 Nov 2011.
If Rim Taan is full, they will find you a room at another Gh in Thoed Thai.

A bump for Thoed Thai & Shan New year 2018-2019 - it will be sometime in the second half of November, towards the end month at a rough guess.
An approach has been made to the kamnan baan to have a farang band play - Johnadda & his gang.
If we can pull this off, would many guys like to go out to Thoed Thai for one or two nights to celebrate Shan New Year, if we have a farang band playing?

For some pics of Shan New Year 2008, there's also some pics in here
Prince of Death Road Trip-Khun Sa Memorial