There's quite a bit going on in the area, but unbelievably Chiang Saen seems to have retained all it's charm & riverside ambience.

There are some nice salas beside the river for relaxing & sheltering from either the sun or the rain.

One of the nicest well maintained, restored buildings in Chiang Saen is the downtown immigration office.

One of the original guesthouses in Chiang Saen was Gin's. I once stayed there 20 years ago & vowed not to go back it was such a dump.

But Gin's has not got money - a bank loan - & built a super nice property wit style, across the road & right on the Mekong.

stroll on out to the Khong

They have a variety of rooms, depending on your taste & budget

check it out sometime.  Plus it is ok breakfast to maybe.

7 kms north / upstream of Chiang  Saen there's an impressive new huge Chedi built in the fields "in the middle of nowhere" so it seems.

now there must be a real interesting behind it's location, construction & funding.

& on the same plot of land a new "monastic residence" or private residence.

The chedi and residence is where Kru Ba Boonchu lives. He is a well respected monk from Burma that you probably know.

The Immigration building is not actually that old, it is clad in imitation wood, but Yes, it has lovely old style.

There is another old building being restored just inside the city wall next to the river road on the south side of town, need to check that out when finished as that is also an old govt building on a big piece of land.

A few more recent pics from around Chiang Saen

In the rainy season, the locals go out in boats on the Khong and drag to the side of the river any logs or tree roots that they can sell.

The new bridge being built over the Kok river at Sob Kok.

The Kok floods the local fields every rainy season.

Wat Prathat Pa Ngao in Sob Kham is supported by HRH Princess Sindhorn, who visits regularly. If you are heading south out of Chiang Saen, when you look up at the temple chedi on the hill, look down and right a little and you can see the royal houses for her, half hidden in the trees, but with commanding views  around the area of Chiang Saen.

This lovely vihara bears her monogram on the gable end

Another wonderful building in teak that has been under construction for many years. The detailing is fantastic.

The oldest part of the temple

Then south and east towards Sob Kok, the Kok river in flood, the port, the river bending round to the north and the mountains on the way to Chiang Khong.

Down town Chiang Saen, by the old wall & main gate entrance to the city

Wat Phra That Chedi Luang was built by King Saen Phu, the 3rd ruler of the Lanna kingdom in early 13th Century stands in mainly in ruins, but under going renovation.

The Lanna-style Chedi which measures 88 metres height with a base 24 metres, is the largest structure in Chiang Saen. The chedi was built circa 1331 and enlarged in 1515, & remains in good condition.

Wat Phra That Chedi Luang
The viharn next door is relatively recent & stands on the brick ruins of a much older structure.

Legend has it that King Saen Phu camped here before surveying Chiang Saen for a new city.

The chedi is thought to have been built in the 14th-15th centuries.

Wat That Khieo lies off R1029, 6 kms downstream from Chiang Saen to the S-E.

Its exact construction history is unknown, but it is believed to have been constructed around the 17th century A.D.

It is a beautiful relaxing site with some wonderful trees

And the highlight of our little stop here was meeting a delightful Thai couple from Chachoengsao; travelling traders who were buying up old mobile phones (for anything from 10 baht) &/or swapping them for plastic household items - buckets & bowls & chairs, to resell the phones for scrap to a dealer in Chiang Rai, who then sold them onto China.
Take your time, look around & engage the locals if you can.

Located on the outskirts of Chiang Saen, on a hill just outside the old wall & moat, to the North-West of town; Wat Phrathat Chom Kitti was built in 940AD.

The original chedi was renovated by King Suwana Kham Lanna in 1488 A.D, but now sits at an angle due an earthquake that struck Chiang Saen in 2007.

There are some stunning views over the Mekong & into Laos from the temple. 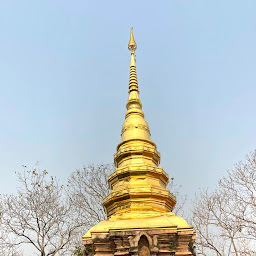 It is believe to have been constructed around 1636 by King Suddhodhammaraj.

This ancient temple consists of an assembly hall & stupa.

The assembly hall is rectangular with the entrance facing to the East. It is an open hall with a wall at the rear behind which was the principal Buddha image.

The stupa is a round shape in Lanna style, with a square base & round mid section. It was last restored somewhat in 2019. 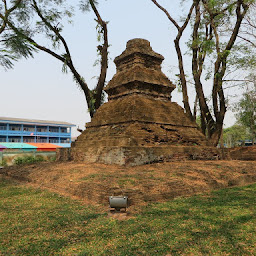 The viharn contains the bronze Buddha image known as Phra Chao Lan Thong, along with a smaller image from 1726 called the Phra Chao Saen Swae (Buddha of a Hundred Thousand Pins), so named because the image was held together by numerous pins before it was cast.

Swing on by now & you can see some fabulous renovations & intricate sculpturing going on. 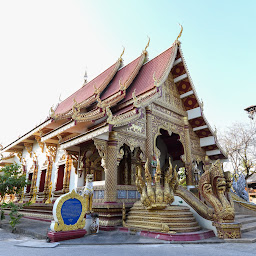 Back on the beat in charming Chiang Saen. There are too many old temple ruins all over town if you want to take the time to meander around the streets at a slow pace. 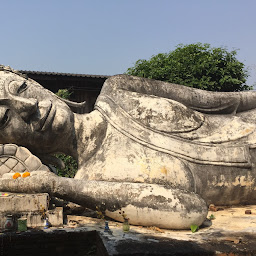 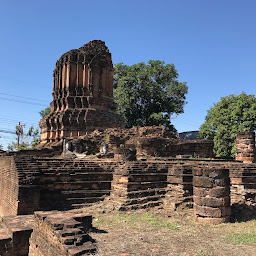 Ancient Chiang Saen was a walled city with a moat around it for protection.

According to an ancient chronicle, the original city of Chiang Saen was built in 545 CE in an area called Yonok by Tai migrants from the Chinese province of Yunnan, and was an important city (Southeast Asia Mandala-model mueang) of the Lanna ('million paddies') Kingdom.

No reliable written history of the city exists until the arrival of King Mengrai in the 13th century. His grandson, Saen Phu, ruler of the Lanna Kingdom, founded Chiang Saen in 1325 or 1328.

The city was sacked by Chao Kawila of Chiangmai during the reign of Rama I, because it had been the Burmese base of operations in the preceding years. The city was deserted, while its inhabitants resettled in other Bangkok-allied Lanna cities such as Lampang and Chiang Mai. Several ancient ruins are found in the old cities.

Take a stroll beside the south wall sometime.

Wat Satsadee is hidden down a narrow lane, 250 metres upstream from the marine police.
You would never know it is there, hidden behind the bushes, but it is there alright.

Worth the effort to take the time to locate it 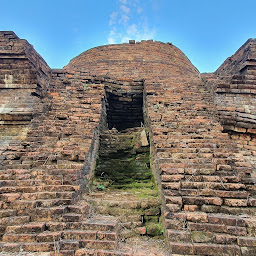 Wat Sangkha Kaeo Don Than located on the river front road on the upstream side of town, was probably constructed in the 16th century A.D. 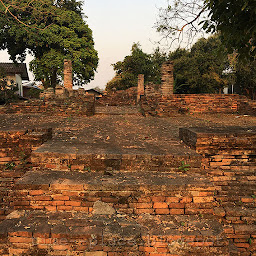 Wat Mongkol, located on the river road at the far north end of town, is believe to have been constructed in the 16h century; & was built by Phaua Sprasoth Majachaui Songlgra Lumpha. 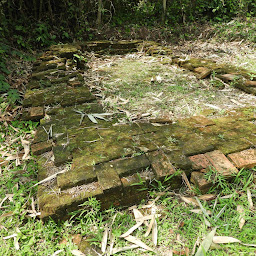 Not a great deal to see here you may think, but, adjoining the site is another old interesting wat, 100 metres away, further back off the river.

There are many magnificent old trees through the site

Wat Maha Pho is well worth a stroll to appreciate the beauty of nature & history. 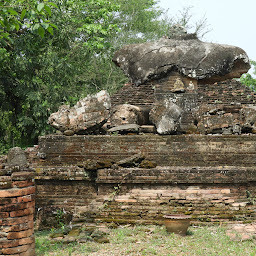 An old renovated building on the river road, that I've long pondered what the story & history was.

Located on old tobacco land, both Ian Yonok & I have thought about it..

I recently stumbled across the photos above & some accompanying info.
Apparently King Rama 9, Queen Sirikit & the Queen Mother came to Chiang Saen & used / rested at this building on March 11, 1958.
Hence the restoration & historical significance.