Install the app
You are using an out of date browser. It may not display this or other websites correctly.
You should upgrade or use an alternative browser.
K

For breakfast last Christmas Eve, expat Aussie Mark Rossi introduces me to the best homemade gyoza I’ve ever had. At Ban Aruna Thai we stopped in at Larn ti Loom’s noodle shop. As we sit and slurp fresh bami noodles, I ask Mark if he knows of any opium fields we could take pictures of. We’re on a three-day tour: A wee jaunt through the mountainous Chiang Mai and Chaing Rai regions.

Mark rides his small Suzuki drz 400cc Supermotard 17”. I’m pillion, perched on his dog’s old mattress for comfort. Sad to say, we didn’t come across any opium fields- I was hoping for some photos of what was once the Golden Triangle’s main crop. As we left the village we passed worn old men lounging on a dusty corner, one with a long ornate pipe resting on his chest. Guess I’ll ask him next time.

I hadn’t been on a road trip by motorbike for years. I’d forgotten how it feels to be closer to everything - the air, the temperature, the smell of cooking and manure… No blind spots save the back of Mark’s head. Rising up from rice fields the roads starts to turn and curve. Surprising number of churches dot the landscape, and I remember how poor and dire this area used to be…

At Ban Thom Ngob, we stop and coffee at the old KMT headquarters of General Li Wenhuan. I tried to jump the wall of the fort, but the shingle broke and we thought it best to leave it alone. Didn’t think to ask someone to let us in. That bright idea came weeks later.

To Angkhang the road winds higher up the banks of the valley. Slowing past a herd of cows the shepherd nods a wave. Down into the dusty mountain village. People are friendly and curious. Although, those Hill Tribe women dressed in all their gaiety can be damn hard to photograph- always shying purposefully away from the camera. Bloody tease.

A quick tour through the Angkhang Royal Agricultural Station, then we were out the other side. In Nor Lae Village I motioned for a photo stop for the millionth time. After this first day I almost lost my enthusiasm for the camera. I just wanted to sit back and enjoy the ride. Almost. The problem was- being on the bike, I saw more of everything.

To the steepest road in Thailand: Literally running along the border of Burma - the road was Thailand and the grass to the left Burma. The tarmac is pot holed, washed out and wild in parts. It’s so steep I lean back like the Man from Snowy River while Mark navigates. Definitely felt steeper with me on the back, I bet. It’s a bit of work, but you can’t deny the fun. We get to the bottom, and then I think- Crap! I should have got a photo of Mark coming down that! But it’s too late now as we were in a race against the low-lying sun.

In the chill of lengthening shadows we wind down until we reach the lowlands. Veering off to picturesque Tha Ton on the River Kok, we drank a coke by the side of the road and watched a few ‘sunset drinkers’ flushed faced and staggering. They can be a bit of a traffic hazard, warns Mark. Tired and aching we both opt for a massage (the best Thai massage I’ve ever had)- and an early night.

To Mae Salong. On the lovely wide curves of Highway 107 we experienced first hand what happens when new made-for-ease-and-speed highways combine with sleepy village mentality. On the open road a buffalo leapt from behind tall grass and into our path, an airborne boy strained at the rope through its nostrils. Mark swerved well…

We took a cuppa at the KMT Martyr Memorial before taking in a few of the sights. The road out to golden Wat Santikiri curves serpentine on and in on itself, while climbing the northern road endless rows of tea bushes flicker through the thicket. By lunch, ‘Fearless Leader’ David Unkovich (another Aussie) and Tim McIntyre (from Singapore) appear.

Mark, Unkovich and myself visit the local market in the late afternoon. David demonstrated his effortless skill at humour and the Thai language. He flirted fluently with ladies old and young. One old bird led him round by the hand- still trying to make a sale.

The highlight that afternoon was the joy ride David gave one of the villagers: A quick run up and down the spine of the hill that is the main street. His pillion was a match for character to be sure. He wore his hat like a turban, played a harmonica and carried a small loudspeaker. Villagers waved out to acknowledge his ride, and his permanent grin widened in response.

Christmas dinner was Chinese, with the most delicious dish of ‘black mushrooms’. Stories and whisky flowed. 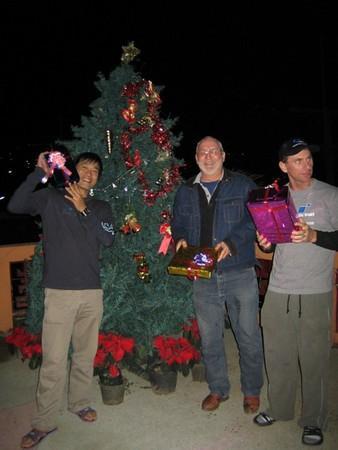 Tim called it an early night after a late afternoon ride that took him a little too far from home. He had enjoyed it for a little too long and had to find his way back in the dark.

Thai fried donuts and coffee at the Mae Salong morning market set me up for the day. I rode with David on his Honda Africa Twin 21”: A nice stretch after the dog mattress. Along the spine of the town’s main road, then curving through morning mist and tea fields we made our way to Thoed Thai. The short sweet ride ended with a visit to the infamous drug lord and freedom fighter- Kuhn Sa’s deserted headquarters.

After lunch David took us through an unravelling back road- potholed and gravel in parts. For half an hour no traffic, no people- just the three bikes climbing and changing over the winding course. Alone save for a farmer’s bike loaded with long bamboo poles. At a crossroads we parted with Mark and Tim.

It’s strange to be surrounded by forest, riding the roads alone in pure scenic bliss: To labor up sharp short hills and around tight corners- in seeming isolation, then to turn suddenly into busloads of tourists visiting the King Mother’s Mae Fah Luang Gardens, or Buddhist pilgrims to Wat Phra That Doi Tung. Culture shock.

Along the Burmese border- more bamboo forts, and down into Mae Sai- no longer the sleepy border town I remembered. It’s a gorgeous trip turning down into the lowlands, with Mae Sai much prettier at a distance. Then a 40 minute lowland blast through to the ‘heart’ of the Golden Triangle, Ban Sop Ruak on the Mekhong. Now a tourist drop-off, coffee drinking, museum visiting and shopping one stop spot. David knew best. We took in the scene - minus the tour buses, statues and tourists- from the Wat overlooking the river.

Following the river as the sun set through Chiang Saen, we rode on to overnight in Chiang Rai. A few beers and a good seat overlooking the dance floor at a Thai country/rock club had us amused for hours.

I’d like to thank the guys here again for showing me such a brilliant time. I loved every minute, although my ass would say otherwise. Thanks so much David and Mark. Loved meeting you boys, and I hope I will again soon. All the best always! Tae

agreed kiwifruit those gyozas are incredible, i now forego eating in chiang dao just so i can pile those special creations down me.

Photos added.
Tae great to hear from you & see your little trip report.

I had to rush back from Laos to link up with you guys, but it was worth it.
The late nights drinking & talking in Doi Mae Salong were something to remember.
Also you are a very good pillion pax, normally I don't take anyone, except the HGLG/FS, so well done.

Tim from Singapore is in town at the moment & has a magazine article coming out soon.

Hope to see you back soon for a longer ride. It was fun!!

The Ghouse in Doi Mae Salong

Thanks for the reminder Tae.

At last: the stories out

We took a cuppa at the KMT Martyr Memorial before taking in a few of the sights. The road out to golden Wat Santikiri curves serpentine on and in on itself, while climbing the northern road endless rows of tea bushes flicker through the thicket. By lunch, ï¿½Fearless Leaderï¿½ David Unkovich (another Aussie) and Tim McIntyre (from Singapore) appear.
Click to expand...

Tim from Singapore is due in town in a few days.