In the past, Nan kingdom’s remoteness was a strength; it kept it relatively independent into the nineteenth century. As did other Lanna states, Nan had to submit to Burmese rules for some time and, after its liberation, engaged in various campaigns, to “invite” Tai Lue people, from Sipsongpanna and Laos, to repopulate the region. These new settlers took along their traditions and skills which also influenced the local populations.


Nowadays, a visit to Nan province is still not on every North Thailand traveler’s itinerary. This is mostly due to a lack of public transportation, but, for bikers and people with their own vehicles, it is a treat. The region features great itineraries, through lush sceneries punctuated with historic sites.


Remarkable Nan gems are mural paintings, to be admired in various temples. Most are worth a visit and deserve a detailed portrayal, but for this “Tai Lue Heritage” chapter, I will highlight a trip through three important places, linked to one particular Tai Lue artist.

The chosen sites can be visited together, as a day trip or separately. The three locations are (Google map linked):

One of Nan’s ubiquitous symbols is an image representing a “whispering couple”. It adorns whatever can bear an illustration, like T-shirts, postcards, souvenirs, and most promotional material.

Similarities of various mural paintings, in different Nan locations, link them to this artist and to the Tai Lue community.

There are no written historic records about the murals in Wat Phumin and Wat Nong Bua. Most information was collected from oral transmissions, in Tai Lue communities. Contradictions and uncertainties are frequent, particularly when comparing various publications, from Thai as well as from foreign scholars [3].

The “whispering couple” with the caption “Puman and Yaman” (poo marn yar marn) written by Nhan Buaphan on the painting’s top.


Wat Phumin was built in 1596 by Chao Chetabutra Phrommin, and renovated by Chao Ananta Woraritthidej between 1867 and 1875. The mural paintings must be slightly posterior, as they have references to the French arrival and the 1893 Paknam incident.

This temple is arguably an architectural gem with its unique cross-shaped Ubosot layout, a square center, four doors and four gables.

All around an amazing place to visit


The temple’s interior is similarly impressive; the roof is supported by twelve massive teakwood pillars, finely embellished with gold motives covered with lacquer. The ceiling is also adorned with decorative patterns.


In the center, a chedi is surrounded by four identical Buddha images, seated back-to-back, facing the cardinal points and the temple’s doors. Recently, a wax statue representing the venerated monk Kruba Siwichai has been placed at the chedi’s base.


Wat Phumin’s real attractions, however, are its mural paintings, added during the latest temple’s renovation, after 1867. The main drawings’ theme is a Jataka story, a kind of folktale or fable, belonging to the Buddhist literature. They narrate previous lives of Lord Buddha, as a Bodhisattva and are used for education, in preaching and other virtue teachings.

Hundreds of Jakatas are recorded in the Buddhist writings, with popularity varying by regions and in time. The main story, illustrated on wat Phumin’s walls, is the “Khatthana Kumara Jakata”, particularly enjoyed in Lan Xang and in Nan. Some scenes also represent the Buddha’s life, others are local nobilities’ portraits and sketches of daily life.


Beyond an artistic appreciation, interpreting Wat Phumin’s murals is not an easy task. The drawings are dense, charged with hints and references to events and people, probably better understood by contemporary folks [3]

The Kattana Jakata’s theme is the quest for a father by an orphan child. Some commentators [3] link this story to political events, as the murals were painted at the time when Nan lost its Laos territories, after the French colonial intervention.

The boy Khatthana asking his mother about his father

A daily life courting scene, a man and a woman lighting their cigarettes as a sign of interest. People are wearing traditional Tai Lue attires


Wat Phumin’s murals feature western influences and references to contemporary events which can be observed in the depicted personages and their clothing. The paintings were completed during King Rama V era when these trends became important.

A group of Thai soldiers


This short series of pictures is only an example to illustrate the Tai Lue influence in the Nan School of Painting. There is a lot more to study and appreciate in the murals, but it would go beyond the scope of this write-up.

“Wat Phratat Chang Kham Worawiha” is another temple located just across Wat Phumin. It also features wall decorations linked to the same artist and to the Tai Lue community. Unfortunately, most images are deteriorated behind recognition.
Google map

A short drive north, twenty-two kilometers from Wat Phumin, along Route 101 (AH13), leads to “Nan Riverside Art Gallery”, a private institution, established by the well-known artist, Winai Prabripoo. It is a pivotal place to study Nan School of Painting and to appreciate regional contemporary artwork.


A nominal parking fee of only 20 THB is requested to access the compound and all its buildings.

Permanent and rotating exhibitions are on display

Modern interpretation of the whispering theme

Particularly relevant, however, for this Tai Lue heritage story, is the in-depth research undertaken by Winai Prabripoo [1], connecting several mural paintings to the same Tai-Lue artist. His findings are displayed in a dedicated building called: “The House of Nhan Bua Phan”.


This gallery features a permanent exhibition displaying photos of Nhan Bua Phan’s paintings, the leading artist who decorated Phumin temple, Nhong Bua temple and other places in Nan. Individual drawings are analyzed, highlighting similarities. Accompanying legends provide a wealth of information which is also published in a book available on site [1].

Reproduction of a painting behind the main Buddha image in Nong Bua – there are similarities with Wat Phumin, particularly in the robes details – all photographs are accompanied by a comment [1]

Photo of a Buddha’s life painting


Nhan Buaphan’s drawings, on koi paper are preserved by the Abbot in Nong Bua temple. A series of reproductions is on display in “Nan Riverside Gallery”. It provides a good base to study the mural paintings in the temples.

In addition to a culturally enriching visit, “Nan Riverside Art Gallery” offers a relaxing stopover, near to the river, with a restaurant and coffeeshop. T-shirts, art prints, postcards, books, and local products are also available as souvenirs.


« Wat Nong Bua” was built by craftsmen from Sipsongpanna (today a South Chinese prefecture). These were immigrants, invited to repopulate the region, during the nineteen’s century; they brought over their customs and skills.

In itself, Wat Nong Bua is worth a comprehensive historic and artistic depiction. This would however go beyond this story’s frame, as my focus is only to point to the temple’s importance in relation to the Nan School of Painting, as highlighted in “Nan Riverside Art Gallery” studies [1].


A charming surprise, when arriving in the garden, at the temple’s entrance, is a melodic welcome by gentle Tai Lue musicians playing traditional tunes.


It is believed that Wat Nong Bua’s construction was administered by the temple’s abbot, Phra Sunanta, in 1862.


As stated by Winai Prabripoo [1]:
"There is no historical record about the mural. Thus, this study relies on verbal stories told by locals as well as my interpretation of the mural’s painting details. It is assumed that the mural had been executed during the reign of King Rama V or approximately between 1872 and 1887”.


The main building is the “assembly hall” (viharn) a square construction, in Tai Lue style, delicately decorated. As usual its orientation is toward the East. Several other places are of interest on the compound; a venerated chedi and a traditional Tai Lue house with looms were locals create traditional textiles.

Inside the decorated Viharn


On the pedestal’s base, under the main Buddha image, two statues portray former temple Abbots: Kruba Sunanta, the monk in charge of the construction, and a more recent personality, Phrakru Sinkuntada (the names are from the statues’ legends).

The Main Buddha image and a sculpture of Kruba Sunanta, who administered the temple’s construction.


Originally the Viharn’s walls were bare and, as remembered by locals, the murals were painted under the lead of Nhan Buaphan. The perfection of these drawings, by the same artist as in Wat Phumin, make them a valuable heritage worth to be protected. Unfortunately, time and weather conditions have already taken a toll on these art pieces which, at their lower part are quite faded out; one major painting was completely erased by a rain leak.

Soldiers with a type of gun popular under Rama IV reign

Scene of the Jakata story


A drawing on the temple’s east wall, representing a “Reclining Buddha”, shares similarities with a painting in wat Phumin. It has the same style, with different details, particularly in the main motif’s surrounding.

“Reclining Buddha” image on the East wall, above the main door

When visiting the valuable temples around Nan and enjoying the delicacy of their mural paintings, it is worth to remember the leading role played by Nhan Buaphan, a Tai Lue artist, and his community, in Nan’s School of Painting.


This book is difficult to find – I did not read it but several commentators, even though lauding the document and its attractive presentation, highlighted some probable misinterpretations. Analyzing such old images, with caption in unusual characters and insinuations to past events and personalities is a very difficult task. Thus, most interpretations of Nan murals have to be taken with a grain of salt.

Oh man..fantastic Jurgen.
What a super collection of images and history.
You're inspiring and make me want to pop over to Nan again soon. In about 10 days k reckon.

Thanks for this reminder too.

It has been on my hit list for awhile now. 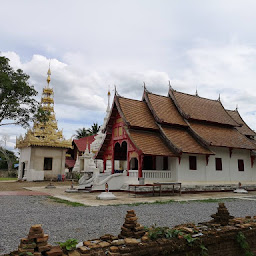 I’ve just taken the time to read, and properly digest this write up Jurgen. Another sensational display of detailed data. I cannot imagine the time and effort you must put into the research and compilation of your write ups! They are a pleasure to read. Thankyou.

This forum would be a much emptier place without your most valuable contributions. Lots of research, photographs and text for all of us to enjoy. Thank you for this lovely addition; mind-opening to one and all ;-) Merci, mon cher, parfait!

A tip of the hat to Jurgen again.
Wat Luang Wiang Ta Mon, I finally got there.

The murals, that appear to be prints, copies of the originals? I don't know & forgot to ask.

Of note too is the spring across the road from the temple.
Bor Nam Sap.

A vertiable oasis in a delightful location.

Thank you for all the information and the lovely pictures. And on David's outfit when visiting the temples ..... well, we're working on that little detail still ;-)

Brilliant report Jurgen once again. Great reading for us locked up far from the mountains of Thailand.

Congrats, Jürgen, oncemore again. It is precisely such most informative detailed work which makes "old hands" revisit and travel even more to discover. The journey is, normally, the destination except upon reading your most interesting articles. Thank you profoundly for that!

Great write-up, Jurgen, thank you.
Super photo of Wat Nong Bua.
That is a must visit sometime.