Many of you will know this, its just a report to say what a joy it is to get away from the traffic, enjoy some good fresh mountain air and see the views.

if you happen to be en route from Fang to Tha Ton just take the left turn for the 1314 about 4 kms before Mae Ai. Its about 35 kms to Tha Ton instead of the 12 kms along the highway but its a great way to enjoy a little diversion.

The road has recently been resurfaced for much of the higher portion and what hasn't is just a few bumps and small pot holes. Much of it is highway standard with great surface and white lines on the side, yellow down the middle.

I rode real slow today and enjoyed looking around at the scenery and stopped for some photos. Some Lahu villages, a sprinkling of KMT Chinese with orange farms, oil palm and other fruit plantations.

Now its winter there is maybe mist in the mornings, the afternoon is better. Be sure to turn left at the T junction at the army base to come out in Tha Ton. The right brings you down in Mae Ai.

Thanks Steve.
I've inserted your images as requested.

BTW yeah this loop really is a beauty & well worth doing,.

Its a magic roller coaster ride

Fossicking Around The Top North

Chiang Rai - Mae Sai - Chiang Saen - Chiang Khong The last few weeks I've been fossicking around the top north for new attractions & places to go for a GT map update. The longer you stay here the more you realize how little you know and how much you need to go back out again to ride & see more...


Khun Sa the famous Shan Opium Warlord / Shan freedom fighter once reigned in the Golden Triangle & had a million dollar reward out for his capture.
He was once based in Thoed Thai, north-east of Doi Mae Salong, where there now is a museum at his old HQ.
Khun Sa – Opium Warlord
In 1982 the Thai army attacked Thoed Thai & forced Khun Sa out & back over the border into Myanmar.
Not to be outdone, he popped up again & set up camp on Doi Larng, N-W of Mae Ai.
He engaged in several altercations with the Thais here & once robbed the bank in Mae Ai for revenge, after one of his big heroin shipments was busted in Chonburi.
The Wa then started to muscle in for control of the area, so Khun Sa retreated to set up camp out of Mae Hong Son at Hmong, north from Rak Thai.
Khun Sa died in Yangon in 2007 & there was a memorial service for him in Thoed Thai on 8 November 2007, for which GTR had the priviledge to attend.
Prince of Death Road Trip-Khun Sa Memorial

Several years later his old camp at Doi Larng is now easily accessible from R1314 at Pang Ton Dua.
Inspired by Rod Page’s report on GTR
ON THE TRAIL OF A MULE - A Drug Run Through The Golden Triangle.
I’d looked for his old camp & the white chedi on Doi Larng several times before, but never quite located it or the access road …….until a few days ago.

The road & track in you need to find

I wasn't sure about tackling this & perhaps getting stuck on a steep rutted track & not being able to turn the Vstrom around without dropping it.

I recently got caught trying to find my way up to a wat on a bloody steep concrete track when I rounded the corner & was confronted by deep ruts. Not able to turn the bike around, I had to reverse back down the gravel covered concrete tracks for a few hundreds metres. Now I always stop & take a careful look first, so as not to get caught out.

Steve from Tha Ton was my riding & hiking buddy for the day.

From whence we came

It actually doesn't take too long & we both surprised ourselves.
On arrival at the top there's a small wat & a sleeping monk.

I woke the monk & endeavoured to get some info but there was a communication issue, to I suggested he go back to sleep and forget about the two silly farang.

To the left of the chedi, a big bunker

inside the the metal door is padlocked.

There are trenches & smaller bunkers on the hilltop

Feeling successful hiking up the steps & full of renewed courage we bravely walked back, down the concrete tracks, rather than the steps.

and the verdict was we should have ridden up, so we did!

Thanks to the spirits for looking after us.

Finding the chedi & the bunkers has been one of the highlights of my time in the North Thailand, as it has long been a missing chapter for me in the Khun Sa story. It goes perfectly with Thoed Thai & I reckon you can't claim to have ridden North Thailand & done both- Thoed Thai & the White Doi Larng Chedi, Wat Phrathat Wiang Doi Larng.
Google Maps

You could spend all day up here on Doi Larng.
R1314 is booming with coffee shops & home stays popping up all along the way.

Fang & Back - A Fang Meander

Tha Ton – Mae Ai loop. Great little detour. If your riding on hwy 1089, and you’ve got a bit of time to spare, I would recommend this little detour. Its only 27 kilometres long, but well worth checking out. This is what it looks like on the GT-Rider Golden Triangle Loop map. I think...

Back up on Doi Larng to follow up on a homestay I spotted with Steve.

The Baan Rabiang Mok @ Doi Lang, is perched on the side of the road & hill with minimal parking.

From the outside it sort of looked somewhat ramshackle, but once you are inside, onsite, the premises are well constructed, functional, smart & clean. I was very pleasantly surprised.

There are 4 rooms plus a tent for the glampers.

Being a homestay in a national park, the bathroom & toilets are outside, but in a convenient location a few metres away.

The issue with accommodation in national parks is that there should be no hotels or resorts.
Only village homestays, run by locals, with a limited number of rooms and bathroom facilities shared as in a private home.

There is a coffee deck with excellent Doi Chang coffee, purchased direct from a small farm at Doi Chang

The afternoon & morning views are stupendous.

The delightful Ms Thum, the manageress.

Thum is an excellent host, speaks good English, is confident dealing with farang from long experience at the ex original Mae Kok River Lodge + the Tha Ton Hill Resort. She is a wonderful bubbly personality & is very sociable. A gem of a gal in the hills.

The night time views of the Mae Ai - Fang Valley are also fabulous.

The Baan Rabiang Mok @ Doi Lang is a super nice place to escape to for a night and chill out in the fresh mountain air.
It is only 7 kms up the hill from Mae Ai. 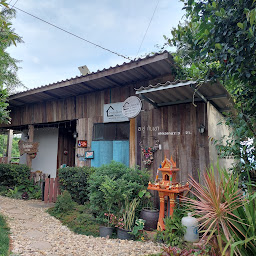 The Baan Rabiang Mok is only 2.5 kms from the ex Khun Sa camp, just up the road. 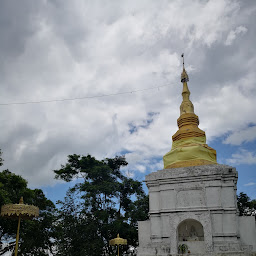 The guy who fitted out this bathroom needs a spirit level

After a super cool night at the Baan Rabiang Mok it was time to mosey off around the loop & head on up to Thoed Thai for the GTR Dinner.
Excluding the Tha Ton extension, it is a 24 kms cruise along the ridgeline.

Off to cut the grass.

Towards the southern end approaching the flat there are a couple of sections where the asphalt is disintegrating.
Nothing difficult, just annoying. Take your time & pick your line.

Check it out some time. 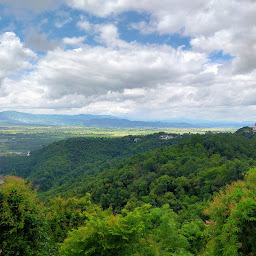 If you're not familiar with the area & road network check out the GTR Golden Triangle map. 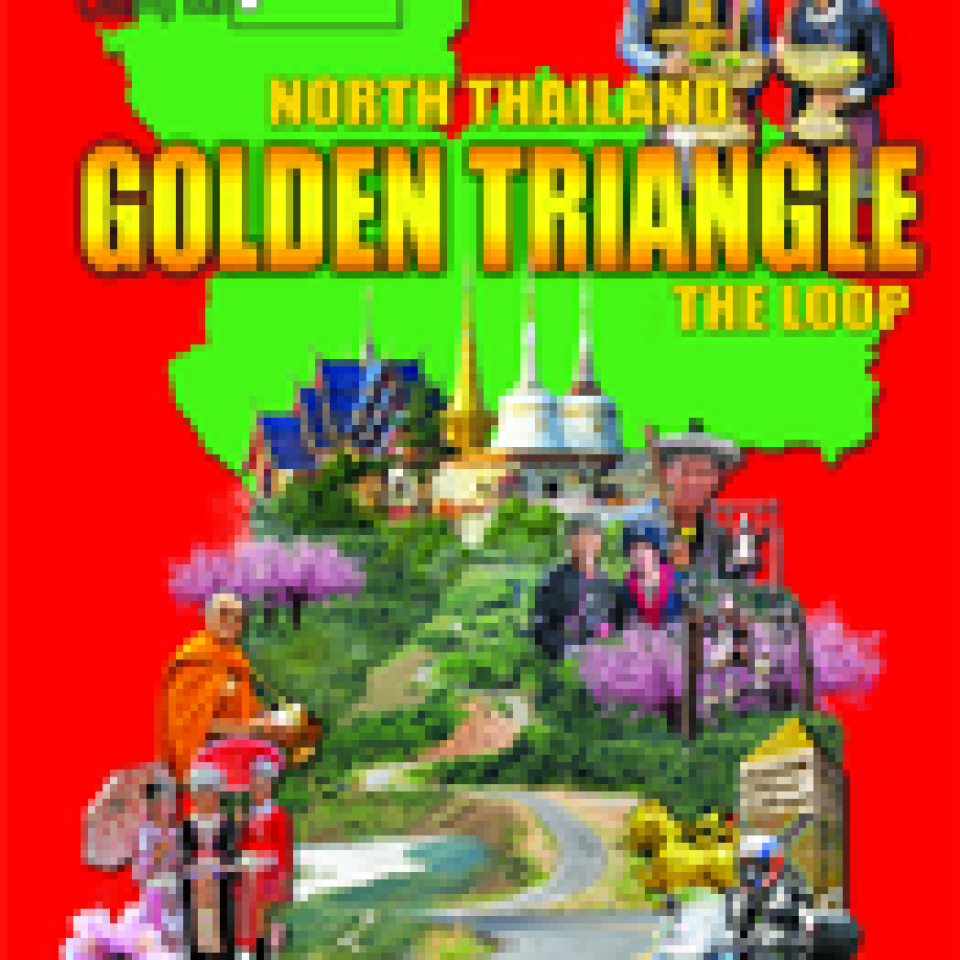