The Si Satchanalai historical park is a lesser known world heritage site, similar to Sukhothai but strangely not as popular.

Founded in 1250, Si Satchanalai was the 2[sup]nd[/sup] centre of the Sukhothai kingdom & ruled by a crown princes in the 13th-14[sup]th[/sup] centuries. In the 16th century, a 5-metre high wall with an upstream moat was built to fend off the growing Burmese attacks.

Si Satchanalai in many ways much more interesting than the more manicured & promoted Sukhothai site; & the ruins to me seem more authentic & more extensive & are most definitely worth a visit.

Park entrance for farang in October was 100 baht - Thai drivers licence not accepted!

No vehicles are allowed in & a treddly is the way go

if you're good enough; or use the guided park "train."

The main temples in the park are

There are numerous other ruins seemingly scattered everywhere amongst the trees, with walls & moats still relatively intact. Indeed it must have been a beautiful city in its day.

If you have not been to Si Satchanalai, you should check it out sometime. Highly recommended.

I will let the images do the talking.

Signs with QR codes allow you to listen / watch a youtube vdo with info on different ruins.

60 kms north of Sukhothai, Sii Satchanalai has quite a few hotels / guesthouse near the ruins, but the ruins are 15 kms from the centre of town & it’s awfully quiet out there at night. Even Si Satch is damn quiet too!

Where to stay in Si Satchanalai

Where to eat in Si Satchanalai

Check it out sometime - the ruins & Si Satch won't disappoint you.

Thank you so much for this, the detour is on the must do now for December on our way to Uttradit from Chiang Mai.

I visited a couple of years ago and found Si Satchanalai to have a wonderful atmosphere. As there are few visitors, it is a peaceful place with similar architectural style to Sukhothai.

Here are a few more pics of this wonderful old ruined city.

This is an interesting feature, only small but similar to the structures on the Bayon in Angkhor, with Buddha looking in 4 directions.

Thanks for this Ian

it lies outside the park & just to the south, beside the Yom River

Wat Phra Si Rattana Mahathat predates the Sukhothai era. It was founded in 1237, when the area was under control of the Khmer empire from Angkor. It was restored and expanded during the Sukhothai and Ayutthaya eras.

Today, the temple is an active monastery with a modern ubosot and kuti, the monks living quarters.

The modern ubosot & the ancient temple

The temple’s modern ubosot, was built over the remains of an older one. Inside the ordination hall is a large golden Buddha image in the “Calling the Earth to witness” posture.

In front of the main Buddha image are numerous smaller old images in various postures.

Back to the ruins - the complex is surrounded by a wall of vertical laterite slabs topped with horizontal slabs is a large number of structures aligned on an East West axis.

Divided into two areas by a laterite wall & a gate;

The laterite wall dividing the sections

the main structures are a prang & viharn in the East section are the prang and principal viharn,

& in the West section are the Phra That Mutao, a Mandapa, and a second viharn.

Phra That Mutao chedi - The oldest structure of the temple, is believed to be of Mon Dvaravati origin.

Behind the Phra That Mutao are the remains of a viharn, an assembly hall named Viharn Phra Song Phi Nong. Its name translates to “viharn of the two brothers”, referring to the two large images inside. 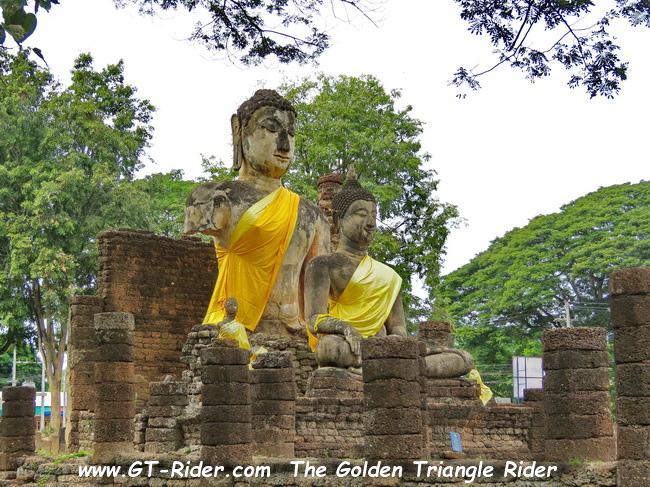 There's a steep narrow stairway up the prang

Looking down the prang stairway

The prang dates to the second half of the 15[sup]th[/sup] century, the early Ayutthaya period & is believed to have been built over an older structure.

The view at the stop is a beauty & worth the climb

Si Satchanalai - Chaliang was once famous for its beautiful ceramics

If you're visiting Wat Phra Si Rattana Mahathat Chaliang, check out the funky little folk museum next door, beside the river.

27 Feb 2020, back in Si Satchanalai after the fantastic GTR dinner at CSL restaurant

The morning after I took my time & wandered up the road to check out some of Si Satch's history & culture at the Museum.

The Gold Textile & Folk Museum was the destination

There are actually two parts to the museum.
One a very informative folk museum displaying old implements used in everyday life, and two the textile museum.
The museum belongs to Si Satchanalai's most prominent family & was opened to the public in 1988, after years of collecting items of Si Satch's history & culture.

Each building housed different sets of utensils and implements.

Each item had an accompanying painting of how it was used above the item.
I have seen many of them on display before, but not with such a clear accompanying image of how they were used.

The pavillion has an exhibition of photos from royal visits and local identities, along with murals of Sisatch culture & festivals.

The Gold Textile museum has some fascinating pieces & items.
Some of the textile pieces are extremely valuable - 300,000 baht & some come from Shan state in Myanmar.
The Shan items remind me of the fantastic Oub Kham Museum in Chiang Rai.
6 nights 7 days in the Top North.

Check it out sometime.
It's free & nice to soak up some of the old culture & history.
Take your time in Si Satch. There's good food & accommodation to make your night in Si Satch a pleasure.
Si Satchanalai Restaurants